Overnight strikes in the Dnipropetrovsk region in central Ukraine killed 13 people and injured 11, with five reported to be in a serious condition, regional governor Valentin Reznichenko wrote on Telegram 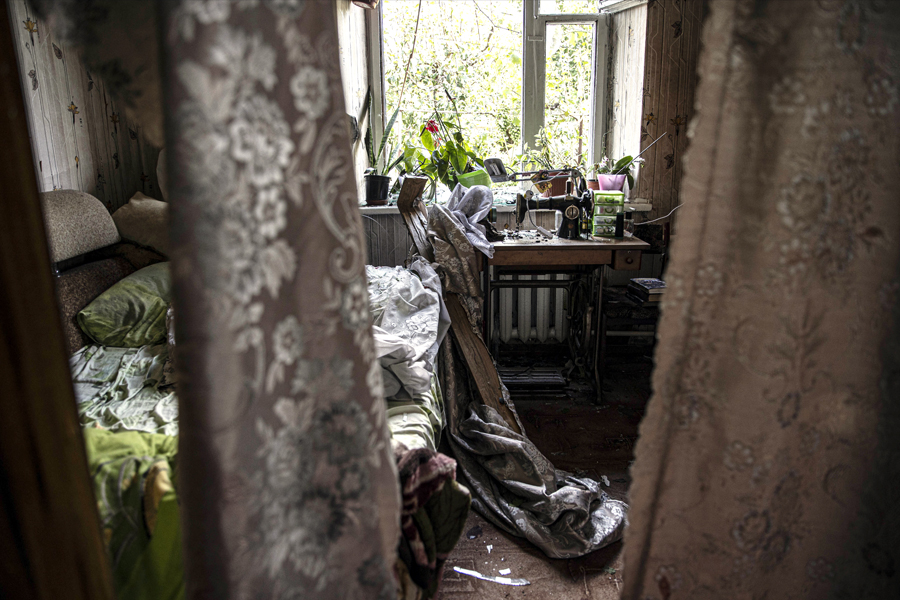 A view of a destroyed house after Russian shelling in a village of Zaporizhzhia Oblast, Ukraine, on August 10, 2022. Image: Metin Aktas/Anadolu Agency via Getty Images

Ukraine on Wednesday accused Russia of carrying out rocket strikes that killed 14 civilians in areas near a nuclear power plant, as the G7 warned that Russian control of the facility "endangers the region".
Overnight strikes in the Dnipropetrovsk region in central Ukraine killed 13 people and injured 11, with five reported to be in a serious condition, regional governor Valentin Reznichenko wrote on Telegram.

"It was a terrible night," he said, urging residents to shelter when they hear air raid sirens. "I am asking and begging you... Don't let the Russians kill you," he wrote.
A woman died after Russian missiles slammed into a village in the Zaporizhzhia region on Wednesday morning, local governor Oleksandr Starukh wrote on Telegram.
Most of the casualties were in the town of Marganets, just across the Dnipro River from the Zaporizhzhia nuclear power plant, Europe's biggest.
Regional council head Mykola Lukashuk said the strikes had hit a local power line, leaving thousands of people without electricity.

Ukraine and Russia have accused each other of recent shelling around the plant, which has six reactors.
Ukraine says Russia has stationed hundreds of troops and stored ammunition at the facility since taking it over on March 4, shortly after starting its invasion.
The tensions have revived memories of the 1986 Chernobyl nuclear disaster in Soviet Ukraine, which killed hundreds of people and spread radioactive contamination over much of Europe.
The Group of Seven industrialised nations condemned Russia's occupation and called on Moscow to immediately hand back full control of the plant.
Also read: Russia's war has killed 75,000 in Ukraine: US
Ukrainian staff operating the plant must be able to work "without threats or pressure" and Russia's control of the plant "endangers the region", the G7 foreign ministers said in a statement.
The strikes came a day after major blasts at the Saki airfield, a key military base on the Russian-annexed Crimea peninsula.
Moscow insisted that the explosions were caused by detonating ammunition rather than Ukrainian fire and Ukraine has not claimed responsibility.

'There is a lot of shooting'

Fighting also ground on in eastern Ukraine, where Russian troops are gradually advancing.
Strikes on the city of Bakhmut killed at least six people and injured three others, regional governor Pavlo Kyrylenko said on Telegram, adding that 12 residential buildings were damaged.
The city of Soledar was under constant shelling, AFP reporters saw, as Russian troops attempted to drive out Ukrainian forces and seize a foothold towards Bakhmut.
The echoes of cluster bombs and artillery bounced off apartment buildings with their windows shattered, while roads were cratered and shops boarded up or destroyed.
The city was shrouded with black and white smoke arising from artillery and air strikes.
Some of those who remain now live underground in cellars ill-suited as bomb shelters.
"Most have left. It's very scary. There is a lot of shooting," said 62-year-old Svitlana Klymenko. "I just want to leave to grow old in a normal way, die a normal death, not be killed by a missile."

The war has severely hampered grain supply from Ukraine, leading to an international food crisis as it is one of the world's biggest producers.
Some ships have been able to leave Ukrainian ports in recent days after a deal with Russia brokered by the United Nations and Turkey.
The first exports of wheat should start next week under the agreement, top UN official Frederick Kenney said on Wednesday.
The first grain shipment to leave on the Sierra Leone-flagged vessel Razoni departed the Ukrainian port of Odessa on August 1 and had been expected to dock in the Lebanese port of Tripoli at the weekend.
But the Ukrainian embassy said a new buyer for the shipment was being sought after the original Lebanese buyer cancelled the order.
Also read: Ukraine prepares grain supplies despite Russia's port attack
Marine traffic sites showed the Razoni docked in Turkey's Mediterranean port of Mersin, following reports a new buyer had been found for its cargo.
Spain on Wednesday launched a pilot project to import Ukrainian grain by train to avoid blocked maritime routes, with a freight train leaving Madrid for the Polish town of Chelm late on Tuesday.
Western countries have meanwhile imposed increasingly stringent sanctions on Moscow, raising fears that Russia may cut off gas supplies.
EU countries have started putting into place different measures to save energy, with air conditioning curbs coming into force in Spain on Wednesday and Vienna dimming street lighting.
A total EU ban on imports of Russian coal was due to come into force overnight.