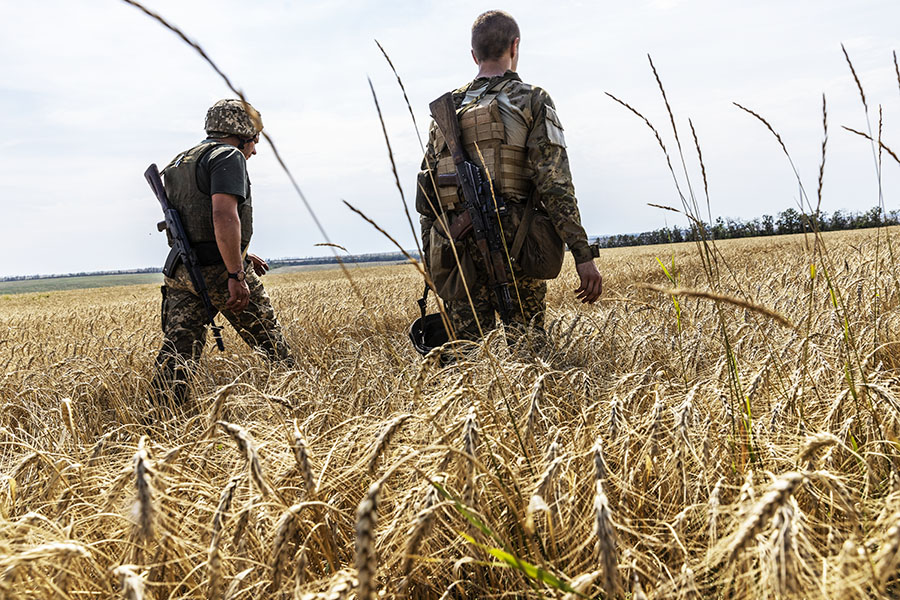 Soldiers from the 93rd Brigade of the Ukrainian Army on patrol in an unharvested wheat field near Barvinkove on Aug. 1, 2022. Ukrainian farmers face many of the same grave dangers as soldiers. (David Guttenfelder/The New York Times)

ZELENODILSK, Ukraine — Their uniforms are dusty jeans and tank-tops, and they drive tractors, not tanks, along the front line in Russia’s war in Ukraine.

But Ukrainian farmers face many of the same grave dangers as soldiers as they reap this year’s harvest. Across Ukraine, Russian artillery and mines have killed tractor drivers. Thousands of acres of ripe wheat have burned from strikes. Fields are pockmarked where incoming shells have left craters.

Serhiy Sokol, a wheat, barley and sunflower farmer in southern Ukraine, said he and his farmhands plucked dozens of aluminum tubes from Russian rockets from the black earth as they worked his fields. Last month, he said, a neighbor’s combine harvester ran over a mine, blowing off one of its fat tires but sparing the driver.

“There were a lot of cluster munitions in the fields,” Sokol said with a shrug. “We just risked it, and thank God nobody was hurt.”

After all Sokol’s troubles, with his barley crop drying in storage, a Russian artillery shell hit his silo. A dozen or so tons of grain burned.

The breakthrough deal that allowed ships carrying grain to depart from Ukraine’s southern ports this week may have solved a diplomatic problem, but it left a more pragmatic one hanging over Ukraine’s farming community: growing and reaping crops in a war zone, as powerful weapons rain destruction across some of the richest agricultural land in the world.

The farmers say they have little choice. Much of Ukraine’s grain crop is winter wheat and barley, sown in early fall and harvested the following summer. After planting before the war began, farmers near the front must take risks now, lest they lose the entire year’s investment.

Ukraine is one of the world’s largest grain exporting-nations, and its profitable agricultural industry is a cornerstone of the country’s economy, accounting for about 11% of gross domestic product and creating about 1 million jobs. Agriculture is even more important for export earnings, accounting for 41% of all Ukrainian exports last year. But the Russians had stymied Ukraine’s ability to export, blocking shipping routes in the Black Sea and, Ukraine says, stealing grain in occupied territory.

Hopes for Ukrainian farming rose this week as the first grain ship, carrying 26,000 tons of corn, left the port of Odesa under an agreement brokered by Turkey and endorsed by the United Nations and intended to ease hunger in the developing world.

Escorted through sea mines safeguarding the port and Russian warships farther at sea on Monday, the ship reached Turkish waters on Wednesday, where it was inspected and cleared to sail on to Lebanon. More ships will follow. The deal is expected to allow the export of about 5 million tons of grain per month, whittling away at a backlog of about 20 million tons of grain in silos from last year, freeing storage space for this year’s harvest. 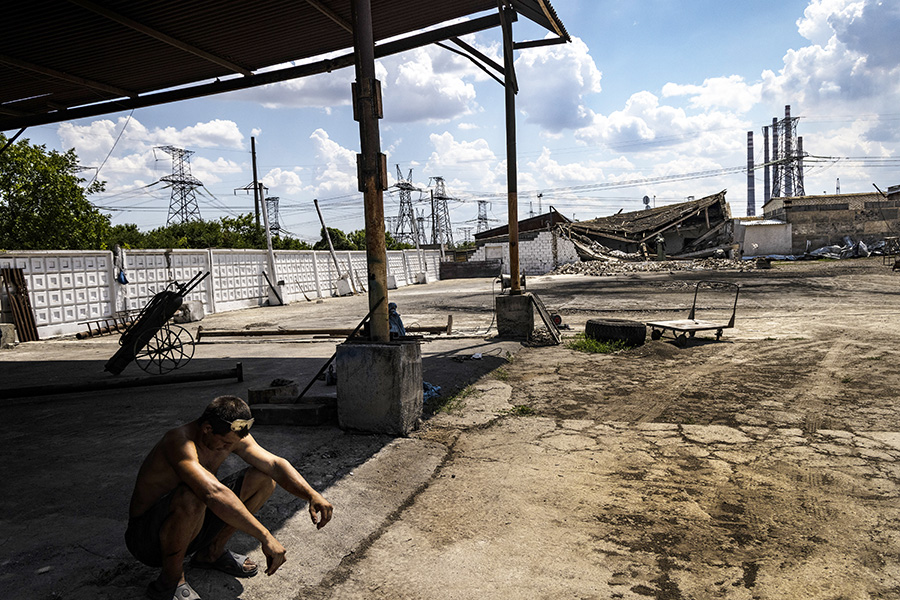 Serhiy Sokol’s wheat and barley farm, where buildings were destroyed by Russian rockets, near the town of Zelenodilsk, Ukraine on July 28, 2022. Sokol said he and his farmhands plucked dozens of aluminum tubes from Russian rockets from the black earth as they worked his fields. (David Guttenfelder/The New York Times)

But planting and harvesting have become such harrowing undertakings that Ukraine will inevitably have less to export this year and into the future, given the obstacles to farming. The U.S. Department of Agriculture, for example, has forecast that Ukraine’s wheat exports, worth $5.1 billion last year, will fall by half after this year’s harvest.

Out in the fields along a section of the front line where the Ukrainian army is pressing a counteroffensive against Russian forces, sunflowers, wheat and barley crops stretch to the horizons.

This is Ukraine’s big sky country: huge expanses of table-flat land, laid out in a checkerboard of gigantic fields.

Closer to the front, chunky Ukrainian military trucks lumber along the back roads, along with tractors and combines bringing in the harvest.

Every few minutes, there is a distant thud from artillery. On the horizon, swirls of smoke blow in the wind from burning fields.

Farmers and Ukrainian soldiers say the Russian military intentionally fires at ripe wheat and barley to start fires, as a form of economic sabotage. There is random destruction as well, as Russian fire aimed at military targets also risks setting fields alight.

“They see the combines and fire at them,” said Yevhen Sytnychenko, head of the military administration in the Kryvyi Rih district, interviewed beside a burning field on a recent tour of front-line farms. “They do it so we won’t have grain, so we cannot eat and cannot export.” 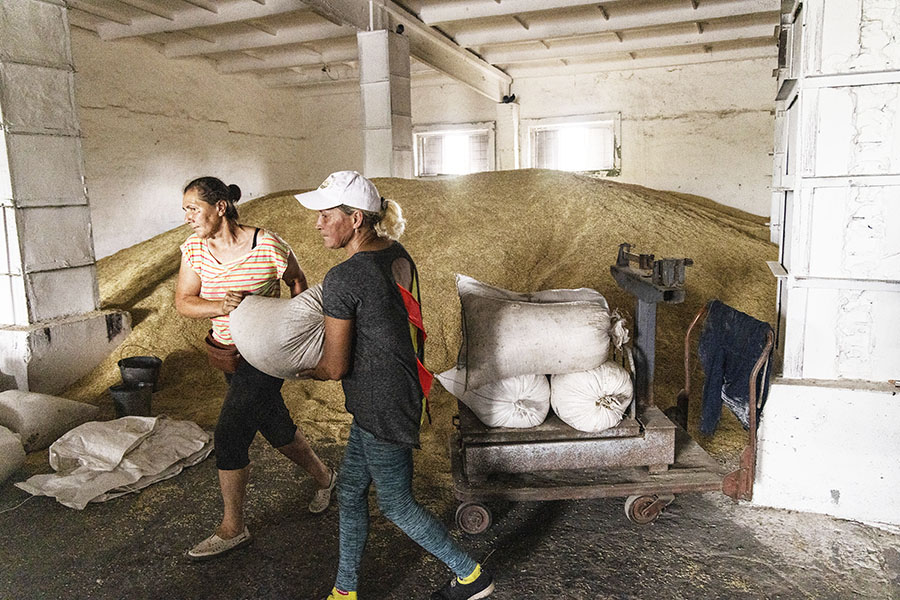 Ukrainians load bags of barley inside one of Serhiy Sokol’s warehouses near the town of Zelenodilsk, Ukraine on July 28, 2022. Sokol said he and his farmhands plucked dozens of aluminum tubes from Russian rockets from the black earth as they worked his fields. (David Guttenfelder/The New York Times)

Sgt. Serhiy Tarasenko, whose soldiers with the 98th infantry brigade have been fighting in farmland south of the city of Kryvyi Rih, said Russian artillery has targeted tractors and combines, which are spotted by drones.

“They are shooting at local people collecting the grain,” he said. “These are people who invested their money and now they need to harvest. But they are now doing it under fire, under attack.”

Ukrainian farmers and the government have been adapting, finding workarounds to blocked transport routes, setting up temporary sites for storing grain and trying to clear mines from fields to bring in the harvest. The hardest hit crops are wheat, barley and sunflowers, as they are grown in areas near the fighting, according to the agriculture ministry.

“While Russia is blackmailing the world with hunger, we are trying to prevent a global food crisis,” President Volodymyr Zelenskyy said of efforts to keep Ukraine’s farms producing.

In the fields on a recent, sweltering afternoon during the harvest, flames crackled through the stubble of the recently harvested wheat crop of Vasyliy Tabachnyuk, picking up with gusts of wind.

Tabachnyuk, whose fields are just a few miles from the front, said he was fortunate to have harvested early. After previous strikes, he has sent tractor drivers into the burning fields to cut firebreaks, trying to save what grain he could. One strike burned about 200 acres of ripe wheat.

If the Ukrainian counteroffensive does not push the Russians back before sowing season for winter wheat in September, he said, he wouldn’t plant for next year.

“All agriculture will be out of business,” he said, standing in the scorched field, where the soil was blanketed in charred kernels of wheat.

“The wheat was ripe,” he said. “It should have been harvested.”