The Biden administration is quietly circulating an estimate of Russian casualties in Ukraine that far exceeds earlier US estimates, telling lawmakers that more than 75,000 members of Russia's forces had been killed or injured

By Catie Edmondson and Eduardo Medina 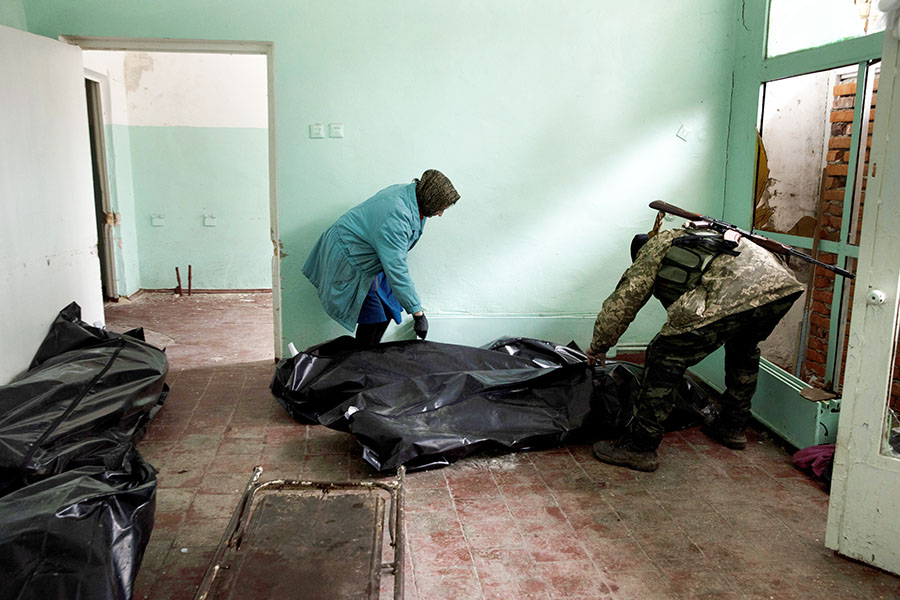 The bodies of Russian soldiers in the morgue in Trostyanets, Ukraine, on Friday, April 1, 2022. The Biden administration is quietly circulating an estimate of Russian casualties in Ukraine that far exceeds earlier U.S. estimates, telling lawmakers that more than 75,000 members of Russia’s forces had been killed or injured. (Tyler Hicks/The New York Times)

The Biden administration is quietly circulating an estimate of Russian casualties in Ukraine that far exceeds earlier U.S. estimates, telling lawmakers that more than 75,000 members of Russia’s forces had been killed or injured.

A legislator who recently visited Ukraine confirmed Wednesday that the estimate had emerged in a briefing from the State Department, Department of Defense, the Joint Chiefs of Staff and the Office of the Director of National Intelligence. Earlier in the day, a reporter for CNN tweeted the estimate and said it had been shared in a classified House briefing.

Casualty estimates for militaries on both sides are highly speculative, U.S. officials have said. They often give ranges rather than specific numbers, although last week, the CIA director estimated that 60,000 Russian soldiers had been killed or injured. And some estimates have gone as high as 80,000 casualties.

If the Biden administration’s current estimate is accurate, it represents a staggering toll. Estimates of the number of Russian forces in Ukraine ranged as high as 150,000 in the spring, meaning roughly half could be out of action.

Pentagon officials have said that losing just 10% of a military force, including those killed and injured, renders a single unit unable to carry out combat-related tasks. Such losses also affect the morale and cohesion of a military unit.

Throughout the war, Ukraine and Russia have shielded their casualty numbers, keeping one another, and the rest of the world, guessing about the depth of their losses. Both sides have an interest in underreporting battlefield losses: Russia to preserve its domestic narrative of success, and Ukraine to maintain morale. Troop deaths and injuries have been mounting, given that fierce fighting has endured for months, but the Biden administration’s estimate suggests just how high casualties may have gone on Russia’s side.

More recently, a senior adviser to President Volodymyr Zelenskyy of Ukraine said that Ukrainian military casualties were now 100 to 200 per day.

Just weeks into the war, U.S. officials offered what they said was a conservative estimate of more than 7,000 Russian war deaths so far — more than the number of U.S. troops killed over 20 years in Iraq and Afghanistan combined. Russia followed with a far smaller count, saying March 25 that 1,351 of its troops had been killed. And Zelenskyy said the same month that an estimated 1,300 Ukrainian soldiers had been killed.

In May, Ukraine said that 30,000 Russian soldiers had been killed since the invasion began in February, a number impossible to independently verify. In April, a British intelligence assessment put the estimated Russian losses at half that number.

Zelenskyy made a new claim in his nightly address Tuesday, saying that almost 40,000 Russian soldiers had been killed since the start of the war, with tens of thousands more injured. That claim comports, in broad terms, with the U.S. estimate of about 75,000 Russian total casualties.