Nukes, oil and a prince's redemption: A trip fraught with perils for Biden

Administration officials know they will get harsh criticism from within their own party when the inevitable photos appear of the president meeting with Crown Prince Mohammed bin Salman, less than two years after Biden promised to make Saudi Arabia a "pariah" on the international stage 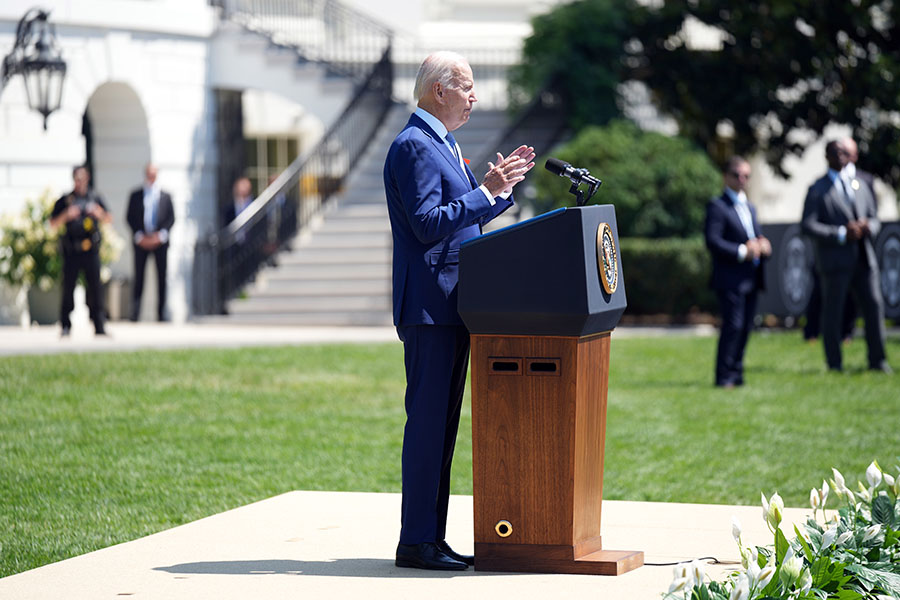 JERUSALEM — President Joe Biden left Washington for a four-day trip to the Middle East on Tuesday to try to slow down an accelerating Iranian nuclear program, speed up the flow of oil to U.S. pumps and reshape the relationship with Saudi Arabia without seeming to embrace a crown prince who the CIA believes was behind the killing of a prominent dissident who lived in the United States.

All three efforts are fraught with political dangers for a president who knows the region well, but returns for the first time in six years with far less leverage than he would like to shape events.

His 18-month-long negotiation to restore the 2015 Iran nuclear deal has ground to a stop, stymying the diplomatic effort to force Tehran to ship out of the country most of the nuclear fuel it is now enriching to near-bomb-grade levels.

And while no explicit deal is expected to be announced on raising Saudi oil production — out of concern that it might come across as unseemly, a reward for easing the crown prince’s return to the diplomatic fold — that is likely to come in a month or two, officials say.

Administration officials know they will get harsh criticism from within their own party when the inevitable photos appear of the president meeting with Crown Prince Mohammed bin Salman, less than two years after Biden promised to make Saudi Arabia a “pariah” on the international stage. That promise was prompted by the murder of the dissident, Jamal Khashoggi, a Washington Post journalist, in 2018.

Biden has often cast this era in history as a contest between democracy and autocracy, and barred Cuba and Venezuela from a recent summit of the Americas in Los Angeles for their repressive practices. But he has justified visiting Saudi Arabia as an exercise in realism.

“My aim was to reorient — but not rupture — the relationship,” Biden wrote in an opinion piece in The Washington Post last weekend. Saudi “energy resources are vital for mitigating the impact on global supplies of Russia’s war in Ukraine,” he said, in his only acknowledgment of the reality that Mohammed’s strategy — wait until the United States needed Saudi Arabia again — was paying off.

There is also an element of superpower maneuvering to the trip.

Biden made it clear when he came to office that he wanted to de-emphasize the U.S. focus on the Middle East, and focus on China — a reflection of his belief that Washington wasted 20 years when it should have been focusing on a true peer competitor.

But the trip is also partly about stemming China’s inroads into the region. Last week, Riyadh and Washington quietly signed a memorandum of understanding to cooperate on building a next-generation 5G cellular network in Saudi Arabia. That is designed to box out Huawei, China’s 5G champion.

The politics of the war in Ukraine will also be in the background.

Biden’s aides made clear that they were annoyed in the spring when the Israeli government insisted on taking a largely neutral stance on the war, insisting that was the only way for its prime minister, Naftali Bennett, to keep an open line to President Vladimir Putin of Russia.

On Monday, as Biden was preparing to leave, his national security adviser, Jake Sullivan, revealed for the first time that intelligence agencies had concluded that Iran — Israel’s primary adversary — was planning to aid Russia in its battle against Ukraine. He said Iran was preparing to deliver to Russia hundreds of drones, or UAVs, some capable of executing attacks.

Sullivan’s primary motive in revealing the Iranian operation was to warn Tehran and Moscow that the United States is watching. But with Biden’s visit expected to open with a demonstration of new Israeli capabilities to use laser weapons against drones and missiles, it appeared also intended to send a message to the Israeli government about more vigorously backing Ukraine.

It also gives Biden and the caretaker prime minister who will serve as his host, Yair Lapid, a common point of agreement in how to confront Iran, amid continuing behind-the-scenes jostling over how to handle a crucial turn in Iran’s nuclear program.

Israel vociferously objected to the 2015 nuclear agreement, and the prime minister at the time, Benjamin Netanyahu, spoke to Congress about the need to block it. (Many of his intelligence and military chiefs disagreed, and later said they thought the agreement, which forced Iran to ship 97% of its fuel stockpiles out of the country, had bought them years.)

When former President Donald Trump pulled out of the accord in 2018, it touched off a new surge in the Iranian nuclear program. It has now produced a considerable amount of uranium at near-bomb-grade purity — something it never did before the 2015 accord — and Israel has stepped up its sabotage campaign, blowing up Iranian facilities. In response, Iran is speeding the development of new, underground facilities.

Officially, Israel opposes a renewal of the agreement — although it appears to be a moot issue.

The talks have been stalled for months, with Biden refusing a demand from Iran that its Revolutionary Guard be removed from Washington’s list of terrorist organizations. Robert Malley, the chief U.S. negotiator, whom the Iranians have refused to meet face to face, told NPR recently that “whether they are interested or not, they’re going to have to decide sooner or later, because at some point the deal will be a thing of the past.”

It may already be beyond the point of resuscitating.

In the early spring, Malley and Secretary of State Antony Blinken said there were just weeks, maybe a month or so, to reach a deal before Iran’s advances, and the knowledge gained as it installed advanced centrifuges to produce uranium in high volume, would make the 2015 agreement outdated.

Now, four months later, Biden’s aides decline to explain how they let that deadline go by — and they still insist that reviving the deal is more valuable than abandoning it.

For public consumption, the White House has argued that Biden’s decision to go to Saudi Arabia was driven by a whole range of national security issues, not just oil. But oil is in fact the most urgent reason for the trip at a time of high gas prices.

Sensitive to the appearance of sacrificing a principled stand on human rights for cheaper energy, the president does not plan to announce any oil deal during his stop in Jiddah, Saudi Arabia. But the two sides have an understanding that Saudi Arabia will ramp up production once a current quota agreement expires in September, just in time for the fall midterm election campaign, according to current and former U.S. officials.

Tweets by @forbesindia
Trump planned march to Capitol, panel says
How 'vibes managers' are on a mission to make you feel the love for NFTs