For more than a year, Trump and his defenders have described the violence at the Capitol as a freewheeling peaceful protest gone awry. But the hearing Tuesday laid out how the former president took a guiding role not only in bringing the mob fueled by his election lies to Washington that day, but also in the plan to direct it up to Capitol Hill, disregarding the advice of his closest aides

By Luke Broadwater and Alan Feuer 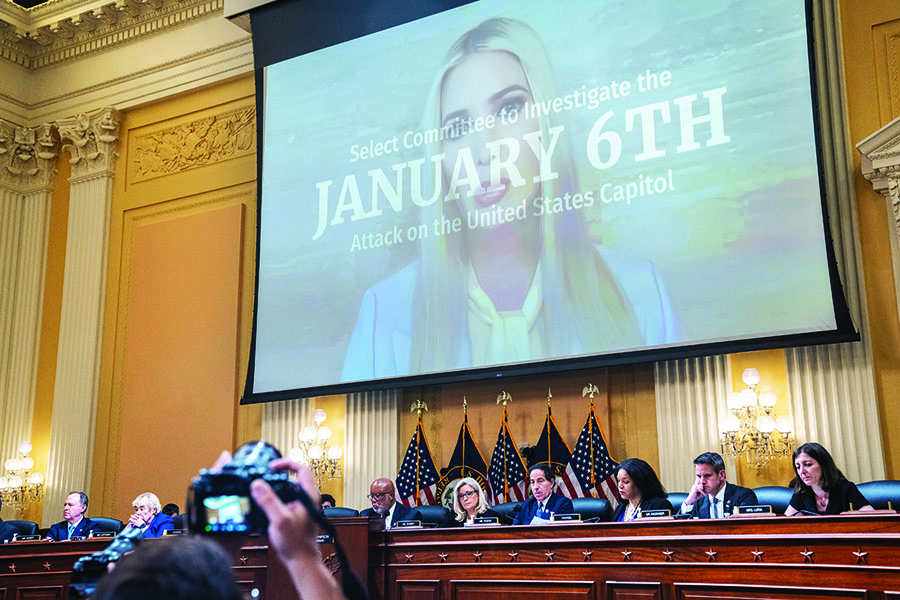 Video of testimony by Ivanka Trump is played during the seventh public hearing of the House Select Committee to Investigate the January 6 Attack on the U.S. Capitol, on Capitol Hill in Washington, July 12, 2022. (Haiyun Jiang/The New York Times)

WASHINGTON — President Donald Trump attempted to make the Jan. 6, 2021, march on the Capitol appear spontaneous even as he and his team intentionally assembled and galvanized a violence-prone mob to disrupt certification of his electoral defeat, the House committee investigating the attack showed Tuesday.

“POTUS is going to have us march there/the Capitol,” Kylie Jane Kremer, an organizer of the “Save America” rally Jan. 6, wrote in a Jan. 4 text shown by the panel Tuesday as it detailed Trump’s efforts to gather his backers in Washington for a final, last-ditch effort to overturn his loss. Kremer added that Trump was “going to just call for it ‘unexpectedly.’”

Trump weighed announcing the move, according to documents obtained from the National Archives, which provided the investigators with a draft tweet that said: “I will be making a Big Speech at 10AM on January 6th at the Ellipse (South of the White House). Please arrive early, massive crowds expected. March to the Capitol after. Stop the Steal!!”

The tweet was never sent. But it was the latest evidence presented by the committee of how Trump undertook a public and private effort to channel angry supporters, including right-wing extremists, toward the Capitol, where Vice President Mike Pence and lawmakers were gathered to confirm Joe Biden as the president-elect.

For more than a year, Trump and his defenders have described the violence at the Capitol as a freewheeling peaceful protest gone awry. But the hearing Tuesday laid out how the former president took a guiding role not only in bringing the mob fueled by his election lies to Washington that day, but also in the plan to direct it up to Capitol Hill, disregarding the advice of his closest aides.

“The president got everybody riled up and told everybody to head on down,” said one of the witnesses at the hearing, Stephen Ayres, an Ohio man who pleaded guilty last month to disorderly conduct charges connected to the Capitol attack. “We basically were just following what he said.”

Even Brad Parscale, Trump’s onetime campaign manager, blamed his former boss for the deadly violence that ensued, according to evidence shown by the committee Tuesday.

“A sitting president asking for civil war ... I have lost faith,” he wrote in text messages Jan. 6 to Katrina Pierson, Trump’s former spokesperson, adding that Trump’s “rhetoric killed someone.”

Even as it revealed new evidence about Trump’s bid to cling to power, the committee suggested that Trump was still trying to protect himself. Rep. Liz Cheney, R-Wyo., the panel’s vice chair, repeated her concerns that Trump has been quietly interfering with the committee’s work by discouraging witnesses from cooperating with the inquiry. After the panel’s last presentation, she said, Trump tried to call one of its witnesses and the witness, through a lawyer, alerted the committee.

Also read: 'I've had it with this guy': GOP leaders privately blasted Trump after Jan 6

“We will take any effort to influence witness testimony very seriously,” Cheney said, adding that the panel had notified the Justice Department about the matter.

In a statement on Twitter, Taylor Budowich, a spokesperson for Trump, accused Cheney of spreading “innuendos and lies” but did not address whether the former president had tried to contact a witness.

In the hearing room Tuesday, Rep. Jamie Raskin, D-Md., a member of the select committee, sought to draw a road map of Trump’s multilayered effort to overturn his defeat, unfolding in three concentric rings.

On the inside ring, Raskin said, was Trump’s pressure campaign against Pence to persuade him to unilaterally throw out electoral votes for Biden as he presided over a joint session of Congress to make the official count.

In the middle ring, Raskin said, far-right extremist groups like the Proud Boys and the Oath Keepers — unleashed by a Dec. 19 tweet from Trump that promised a “wild” rally in Washington on Jan. 6 — took the lead in invading and occupying the Capitol. And in the outer ring, he added, a large and angry crowd, encouraged by Trump’s lies about election fraud, became a “political force” that sought to keep the former president in power.

The story the committee told Tuesday took place over three chaotic weeks at the end of 2020, starting Dec. 14, when the Electoral College met and declared Biden the winner of the election. Within a day, leading Republicans, like Sen. Mitch McConnell, R-Ky., acknowledged Biden’s victory, and several aides to Trump, including Pat Cipollone, the top lawyer in the White House, advised the president to concede.

Instead, the committee documented how Trump ignored top administration officials and turned his hopes and attention to a group of outside advisers who were recommending a dangerous and unprecedented plan to use the country’s national security assets to seize control of voting machines and essentially rerun the election.

Through videotaped testimony, the panel brought to life a heated and often profane meeting in the Oval Office on Dec. 18, 2020, in which the advisers — among them, lawyer Sidney Powell and national security adviser Michael Flynn — fought with Cipollone and other White House advisers about the plan to seize the machines and to appoint a special counsel to investigate election fraud.

Early the next morning, once the meeting ended, Trump posted the message on Twitter urging his supporters to come to Washington on Jan. 6, writing, “Be there, will be wild!”

The response to the message was immediate and electric.

In the darkest corners of the internet, Trump supporters on websites such as TheDonald.win soon began discussing bringing handcuffs, body armor, shields, bats and pepper spray to Washington. Others talked about committing violence.

“Why don’t we just kill them?” one person wrote on the chat board 4chan. “Every last democrat, down to the last man, woman, and child?”

On Dec. 21, 2020 — two days after Trump’s tweet about Jan. 6 was posted — a group of far-right members of Congress met with the president at the White House to discuss conservative lawyer John Eastman’s theories about pressuring Pence to disrupt the normal workings of the Electoral College and keep Trump in power. The members of Congress at the meeting included Reps. Andy Biggs of Arizona, Matt Gaetz of Florida, Louie Gohmert of Texas and Scott Perry of Pennsylvania, the committee said.

The committee heard Tuesday from another witness, Jason Van Tatenhove, a former spokesperson for the Oath Keepers, who described the group as a threat to democracy. The leader of the Oath Keepers, Stewart Rhodes, is one of several members of the group who has been charged with seditious conspiracy in connection with the Capitol attack.

And for the first time, the committee heard testimony from a criminal defendant who was at the Capitol on Jan. 6 and is now facing charges. The defendant, Ayres, told the panel that he had gone to Washington at Trump’s direction and marched to the Capitol when the president told him to, and would never have gone in the first place had he known that Trump’s election fraud claims were false. He said that his participation in the riot had ruined his life and that he felt duped and betrayed by Trump.

“I felt like I had, you know, like horse blinders on — I was locked in the whole time,” Ayres said. “The biggest thing for me is, take the blinders off, make sure you step back and see what’s going on before it’s too late.”