In a prime-time presentation of the findings from a year-long probe, A US congressional panel special committee sought to persuade a divided country of the existence of a deep-rooted and ongoing plot—orchestrated by the former president—to overturn the result of the 2020 election won by Joe Biden 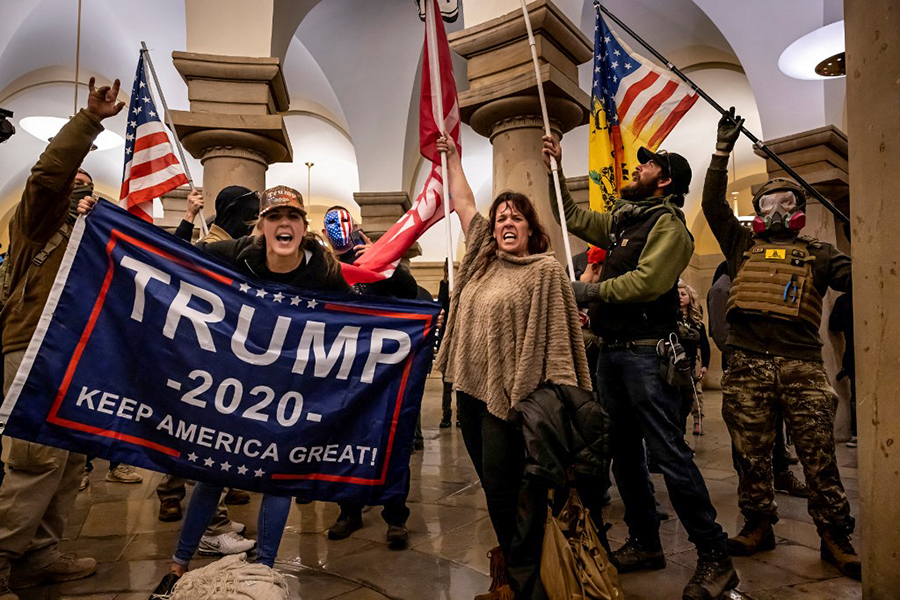 Supporters of US President Donald Trump protest inside the US Capitol on January 6, 2021, in Washington, DC. - Demonstrators breeched security and entered the Capitol as Congress debated the 2020 presidential election Electoral Vote Certification. Image: Brent Stirton/Getty Images/AFP

Washington, US: A congressional panel investigating last year's mob assault on the US Capitol laid out its case Thursday that Donald Trump and his claims of a stolen election were at the heart of what amounted to an "attempted coup" to remain in power.

In a prime-time presentation of its findings from a year-long probe, the special committee sought to persuade a divided country of the existence of a deep-rooted and ongoing plot -- orchestrated by the former president -- to overturn the result of the 2020 election won by Joe Biden.

"President Trump summoned the mob, assembled the mob and lit the flame of this attack," the Republican vice chairwoman of the panel, Liz Cheney, said in her opening remarks at the first in a series of hotly anticipated summer hearings.

Minutes earlier, Democratic committee chief Bennie Thompson accused Trump of being "at the center of this conspiracy."

"January 6 was the culmination of an attempted coup -- a brazen attempt, as one rioter put it shortly after January 6 -- to overthrow the government. The violence was no accident," he said.

Rioters acted "at the encouragement of the president of the United States," to march on Congress and block the formal transfer of power by lawmakers to Biden, he added.

The panel's carefully produced presentation made use of testimony given behind closed doors by some of Trump's most senior and trusted advisors, including former attorney general Bill Barr and Trump's son-in-law and senior aide, Jared Kushner.

The panel aims to demonstrate that the violence was part of a broader -- and ongoing -- drive by Trump and his inner circle to illegitimately cling to or regain power, tearing up the Constitution and more than two centuries of peaceful transitions from one administration to the next.

Thursday's session and five subsequent hearings over the coming weeks will focus on Trump's role in the multi-pronged effort to return him to the Oval Office by disenfranchising millions of voters.

Trump has defiantly dismissed the probe as a baseless "witch hunt" -- but the public hearings were uppermost in his mind Thursday as he fired off a largely false tirade on his social media platform, defending the insurrection as "the greatest movement in the history of our Country to Make America Great Again."

Following the hearing, he lashed out again on Truth Social, accusing the committee of bias and doubling down on his election fraud claims.

"The Unselect Committee of political HACKS refuses to play any of the many positive witnesses and statements," he wrote.

The case the committee wants to make is that Trump laid the groundwork for the insurrection through months of lies about fraud in an election described by his own administration as the most secure ever.

His White House is accused of involvement in several potentially illegal schemes to aid the effort, including a plot to seize voting machines and another to appoint fake "alternative electors" from swing states who would ignore the will of their voters and hand victory to Trump.

Thursday's hearing featured live testimony from two people who interacted with members of the neofascist organization the Proud Boys on January 6 and in the days leading to the violence.Also read: Extremists find a financial lifeline on Twitch

Emmy-winning British documentary filmmaker Nick Quested testified about his experience shadowing members of the Proud Boys in the days leading up to January 6 and his interactions with them on the day itself.

Quested recalled being shocked by "the anger" he saw among the group's members, and described the larger rally crowd as transforming "from protesters to rioters to insurrectionists."

"I was surprised at the size of the group, the anger and the profanity," he said.

Capitol Police Officer Caroline Edwards, who was present at the breach of the first barricade, described sustaining head injuries in clashes with the Proud Boys, whose leader has been charged with seditious conspiracy, along with four lieutenants.Also read: Trump supporters breach US Capitol

"I can just remember my breath catching in my throat, because what I saw was just a war scene. It was something like I'd seen out of the movies," she said.

"I couldn't believe my eyes. There were officers on the ground -- they were bleeding, they were throwing up... I saw friends with blood all over their faces. I was slipping in people's blood."

The series of hearings will differ from Trump's two impeachments in that he will not be represented in the room as he is not on trial -- except perhaps in the court of public opinion.

Nevertheless, a number of his most loyal counter-punchers are expected to circle the wagons, challenging the investigation at every turn.

"It is the most political and least legitimate committee in American history," the leader of the House Republican minority, Kevin McCarthy, told reporters.

In fact, Congress has wide-ranging oversight powers, and a Trump-appointed federal judge last month emphatically rejected Republicans' arguments that the committee is illegitimate.

The panel has not confirmed what it plans to do after the initial slate of hearings, but at least one more presentation and a final report are expected in the fall.

Tweets by @forbesindia
Old tricks, new crises: How misinformation spreads in the US
Games 24x7: How Bhavin Pandya and Trivikraman Thampy turned wild cards into a winning hand