'Like a Trump rally': Inside Donald Trump's Truth Social app

For the users who make it past the waitlist to join and then the ubiquitous tech glitches on the freshly launched app, a first scan reveals that the platform calling itself a "big tent" of ideas has a tight focus on the former US president's favorite fixations 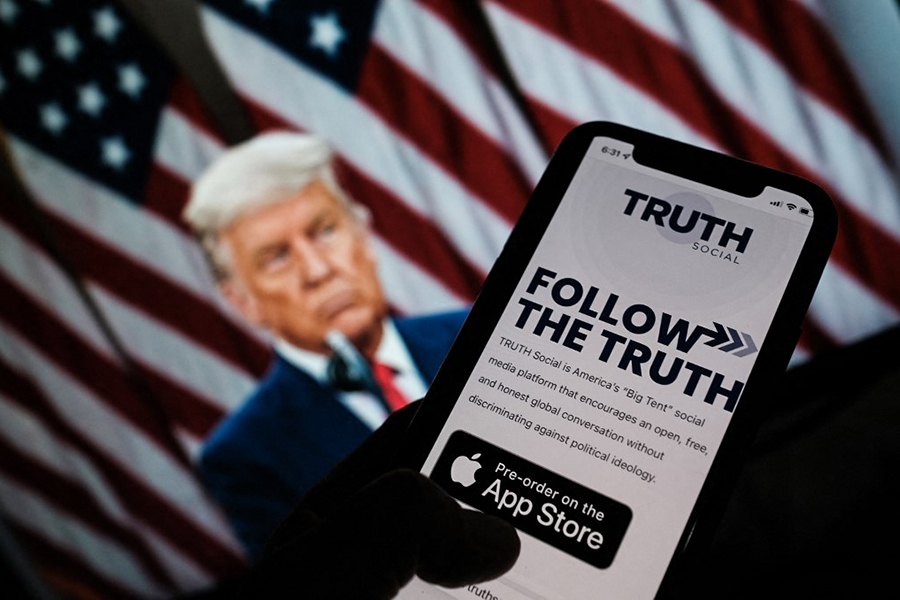 After Facebook, Twitter and YouTube barred Trump last year, he is seeking a new direct-to-voter megaphone ahead of a key legislative election this year (Credits: Chris DELMAS / AFP)

Washington, US: US President Joe Biden in Taliban fighter garb or stumbling over his words or bungling efforts to avert war in Ukraine — posts on Donald Trump's new social media network "Truth Social" have a go-to target.
For the users who make it past the waitlist to join and then the ubiquitous tech glitches on the freshly launched app, a first scan reveals that the platform calling itself a "big tent" of ideas has a tight focus on Trump's favorite fixations.
"Truth Social is like one big 2016 Trump rally. Come on over," Arizona state Senator Wendy Rogers appealed on Twitter, with a picture of her Truth profile. "I am dropping Truth bombs."
After Facebook, Twitter and YouTube barred Trump last year, he is seeking a new direct-to-voter megaphone ahead of a key legislative election this year — and what his backers hope will be another run for the White House in 2024.
The tech giants booted Trump following his supporters' deadly assault on the US Capitol and accusations he had used the platforms to incite the violent bid to overturn his 2020 election loss.

Before being banned, the ex-reality TV star had gained an audience of some 89 million followers on Twitter and used the massive platform to lead, attack and speak his mind.
Two days after going live on Apple's App Store, the waitlist to join Truth had grown to some half-a-million would-be users by Wednesday — a rapid increase that nonetheless represents a fraction of his defunct Twitter account.

'Not safe for work'

Still, the internet infrastructure company RightForge, which is hosting Trump's venture, says it expects the network to eventually grow to more than 75 million users.
Users scrolling through the Twitter and Instagram-inspired interface could see a large number of "truths," as posts on the platform are called, focusing heavily on the former president's favorite topics.
There were broadsides on the "fake news" mainstream media, though in this case it was for their decision to not relay false claims about the death of Britain's Queen Elizabeth.
Among the Biden rebukes was a meme showing the president in a turban and holding a rocket-propelled grenade launcher on his shoulder with a caption of "Making the Taliban great again!", echoing Trump's attacks after the end of America's longest war.
Messages and user names also repeatedly incorporated the phrase "Let's Go Brandon" — a coded insult against Biden that has become a rallying cry for Trump's supporters.
"Truth Social allows the posting of 'not safe for work' and 'trolling' content," the platform says in its community guidelines.
A few of the platform's features however would be welcomed by some social media critics, including Truth's minimum user age of 18 and a chronological content feed.
A 13-year-old age limit at most platforms has been attacked for treating children like adults, and the black box algorithms on services like Facebook have been accused of stoking hate, division and violence in the name of keeping users online.

In presenting itself as a "big tent" forum "for free thinking and the ability to share ideas freely", Truth aligns with right-wing accusations that social media has been inhospitable to conservative points of view.
However, Truth's terms of service say user contributions must not be "obscene, lewd, lascivious, filthy, violent, harassing, libelous, slanderous, or otherwise objectionable".
Twitter, one of the platforms that conservatives accuse of being unfair, takes aim at harmful misinformation notably in specific contexts like Covid-19 hoaxes or misleading information that could influence an election.
"We want to be very family-friendly," Trump Media & Technology Group CEO and ex-congressman Devin Nunes told Fox Business in an interview aired in January.
The finer points of the moderation system and its potential capacity to enforce strict limits remain unclear, but Nunes noted the company is working with Hive, a startup that provides automated content moderation.
Trump himself was repeatedly accused of making false or misleading statements online, so his future posts could offer some complex test cases for the platform.
Yet in an indication of the challenges of using the app so far, an AFP journalist's Truth account was not able to access Trump's page and TMTG did not reply to a query about its status.
Donald Trump Jr. though has said his father is already online, tweeting an image of the elder Trump's first "truth": "Get ready! Your favorite president will see you soon!"
© Agence France-Presse