The coin features Donald Trump's face embossed in gold on a base of shining silver and his slogan, "Keep America Great," is written in an arc atop his head

By Stuart A. Thompson 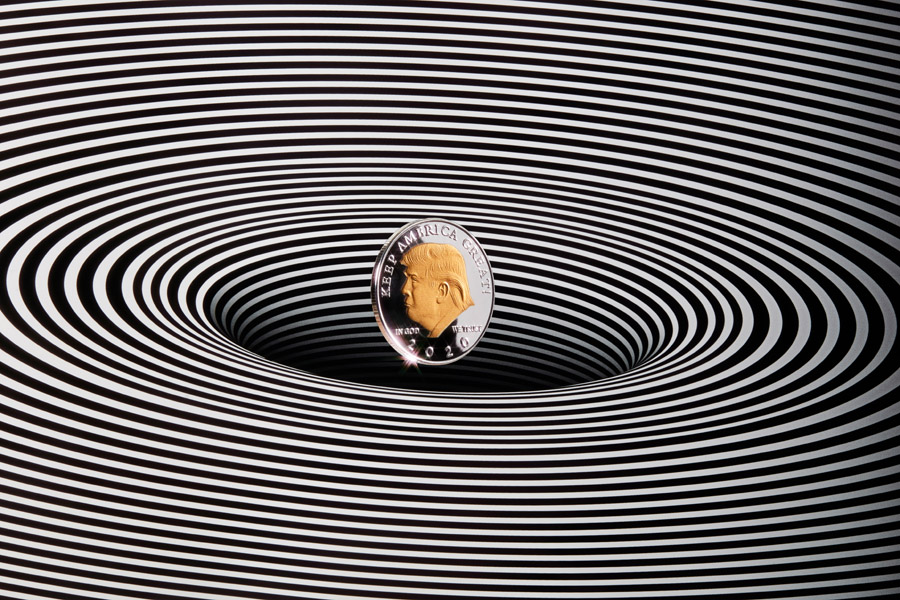 The “Trump coin,” a favorite of right-wing social media and fringe news sites, has become something of an internet mystery. It’s not obvious who’s promoting it or profiting from it. (David Brandon Geeting/The New York Times)

The novelty coins are simple, glistening tokens of admiration for former President Donald Trump. They’re also one of the hottest products going.

There’s a style for every taste, each featuring a portrait of Trump. Sometimes he’s rendered in gold, staring thoughtfully into the distance. In others he’s smirking in silver, raising a thumbs-up, or even riding a missile while a bald eagle soars behind him.

Among all the options, one version stands out. Known online as simply the “Trump coin,” it has become a favorite of right-wing social media and fringe news sites. It’s advertised between claims of stolen elections or conspiracy theories about global cabals. Some ads even describe the coin as a kind of cryptocurrency, suggesting it would soon be worth thousands.

The coin itself features Trump’s face embossed in gold on a base of shining silver. His slogan, “Keep America Great,” is written in an arc atop his head.

This particular version has become something of an internet mystery. It’s not obvious who’s promoting it or profiting from it. It’s sold by a mysterious news website about which little is disclosed. Trump has nothing to do with the coin. No identifiable company is taking credit.

Some internet sleuths have followed digital breadcrumbs to suss out the organizations behind the coin’s popularity. The New York Times took a similar path, tracking a network of advertisers and following their activity from public storefronts to private marketing portals. Using guidance from insiders and marketing veterans, the search crisscrossed the globe, implicating a handful of companies and a legion of anonymous marketers operating in parts unknown.

The collectible novelty item might seem harmless, but that is part of the danger, experts say, because it’s easy to underestimate how the drive for profit can create new incentives to spread disinformation online.

“You make it small enough and harmless enough that no one can object to the individual grift,” said Danny Rogers, a co-founder and executive director of the Global Disinformation Index. “But taken together, you’ve built a movement.”

To understand how it all works, start with Denzel Washington.

Chat app Telegram has become a hotbed of right-wing activity, with a stream of politicos and conspiracy theorists posting misleading updates about everything from vaccinations to deep state plots.

Joining the fray recently was an account posing as Washington, an Oscar-winning actor.

“Democrats are only causing panic and insecurity, and the American people are not safe with them on the wheel,” the account, RealDenzelWashington, posted on a page featuring his name next to a handsome profile photo.

Then the account announced that “real money” would disappear. The “Trump coin” would reign in its place.

That phony account is one of many on Telegram that use celebrity names and photos to push the Trump coin. There’s Ivanka Trump (more than 100,000 followers at one point), Mel Gibson (more than 140,000 followers), Trump-era special prosecutor John Durham (more than 210,000 followers), along with Keanu Reeves, Sen. Ted Cruz and even John F. Kennedy Jr. (who died in 1999). Each account pushes its own mix of patriotism, anti-vaccine content and claims that President Joe Biden is illegitimate. Many posts falsely claimed that the coin’s value was about to surge, invoking the soaring price of cryptocurrencies like Bitcoin.

Conservatives turned to Telegram as Facebook and Twitter cracked down on conspiratorial and violent content after the Jan. 6 attack on the Capitol. Watchdogs have warned that Telegram exercises far less moderation than rival social media. Many of the fake accounts have remained online for months, and new ones keep popping up. Others have been disabled, like the fake account with Washington, or labeled “scam” or “fake” by Telegram. The company did not respond to requests for comment.

In one post, a fake account for Rep. Marjorie Taylor Greene, R-Ga., who is closely aligned with Trump, shared a fake story on a fake Fox News website about a fake tweet by a fake Elon Musk, falsely claiming that Tesla’s CEO would soon accept Trump coins as payment.

A spokesperson for Washington said he was not available for comment but confirmed that the account was fake. Greene did not respond to requests for comment.

Whether the coin was pitched as a kind of cryptocurrency or as a mere collectible, most ads on Telegram linked to the same place: the Raw Conservative Opinions Store.

The storefront claims that the coin has the “highest quality craftsmanship” and is “America’s favorite souvenir.”

The shop itself is hosted by right-wing news purveyor Raw Conservative Opinions, which features an American flag logo and a color scheme in red, white and blue. One article detailed “6 Factors Which Point To A Rigged Election,” including misleading claims that votes were swapped from Trump to Biden and that vote surges were evidence of manipulation. It was copied word for word from right-wing conspiracy site OffGuardian.

No owner is listed for Raw Conservative Opinions. The website was registered in 2016 using a business park address in Louisville, Kentucky. A representative from the office building said the suite number did not exist. A phone number was also provided, but a woman who answered said she didn’t speak English and hung up, then didn’t answer repeated phone calls and text messages.

... With marketers making a buck

In the sprawling world of online advertising, one niche plays an outsize role in the sale of the Trump coin: affiliate marketers.

When someone buys the coin, most of the money goes to the seller. But a cut is shared with the affiliate marketer — an independent worker who advertises products online for a cut of the profits.

Affiliate marketing is a multibillion-dollar business, with websites and YouTube channels earning hefty commissions by posting quality endorsements. But some affiliate marketers work at the margins. If a seller has some diet pills or conspiratorial e-books, they can offer the products to affiliate marketers, who will post ads and create websites, or use less ethical methods like creating fake social media accounts that can generate traffic to the seller’s sales page.

ClickBank, a large affiliate network based in Idaho, listed the coin last year when sales were surging. The company wrote in a blog post that the Trump coin was its most popular product for October, and No. 2 in November.

The center of the mystery

One set of marketing material detailed how House Speaker Nancy Pelosi planned to ban the Trump coin. The claim became so widespread that fact-checkers worked to debunk it.

Aneela Mirchandani, a software engineer and writer in San Francisco, mapped out an even larger network of products leading back to Conservative Affiliates for her blog The Odd Post. She investigated the coin after seeing it advertised on conservative social network Parler, where it was pushed by fake celebrity accounts. (Sound familiar?)

Her investigation uncovered digital identifiers on the Raw Conservative Opinions storefront that matched an array of other products, like the apocalyptic e-book “Alive After the Fall.” That book was also mentioned on Conservative Affiliates.

“They all led to this one door,” Mirchandani said.

The Times conducted a similar search, reviewing an archived version of the Conservative Affiliates site from February 2020. That page offered a vital clue: an email for Romanian marketing company Stone Force Media. The same name appeared on an obscure part of an affiliate marketing portal, which was visible only after signing up to advertise the Trump coin.

Mirchandani had also spotted the archived page along with a mention of Stone Force Media on an affiliate portal for “Tactical Home Defense,” an e-book about defending against home intrusion.

Those details placed Stone Force firmly in the middle of the mystery, with connections to Raw Conservative Opinions, Conservative Affiliates, the ClickBank listing and many other political and conspiracy-tinged products pushed online, including the coin itself.

Stone Force is an internet marketing company specializing in “audience acquisition and monetization,” according to its Facebook page and online job postings. The company’s co-founders include Vlad Bolovan, who lists on his Instagram profile that he lives in Bucharest, and Brandon Kelly, who lists on his Facebook profile that he is from California and lives in Romania.

Operating from Bucharest since 2016 with a staff of eight, Stone Force posted revenue of $1.07 million 2019, according to business analysis company Dun & Bradstreet. The listing on D&B, which also showed revenue for 2020, was taken offline after the Times contacted Stone Force for this article.

When reached about the coin, a spokesperson for Stone Force confirmed that the company was the coin’s vendor but declined to comment further. He later forwarded an email from late 2021 showing that Stone Force had warned affiliates against marketing the coins as a kind of cryptocurrency. As of January, many ads on Telegram were still promoting the coin that way.

Rachel Edwards can’t remember where she first spotted the coin, but she thinks it was an ad on Facebook. Edwards, a mother of three from Alabama, said the coins immediately caught her eye — and so did the price, with a single coin costing nothing but shipping and handling.

“So I ordered five,” she said.

They arrived in about a week, packaged inside a simple padded envelope. The coins looked good, each in a protective plastic case, and she said they had enough heft to suggest they were real silver.

But there was something amiss.

“The bag they came in individually just had a sticker that said, ‘Made in China,’” she said.

Neil Segal, a dealer at Colonial Stamp and Coin in Kingston, New York, tested another Trump coin bought from the Raw Conservative Opinions Store. He used a device that detects precious metals.

He found no gold or silver. The coin was also magnetic, suggesting it was mostly made of iron.

Jack Batelic, a gold appraiser at PRS Gold Buyers in Newburgh, New York, tested the coin using a nitric acid solution. After he applied a blob to Trump’s gold-colored image, the area darkened, bubbled and then turned green.

What was it worth?