The breathtaking testimony presented by his former aide, Cassidy Hutchinson, at Tuesday's House select committee hearing portrayed Trump as volatile, violent and vicious, single-minded in his quest to overturn an election he lost no matter what anyone told him 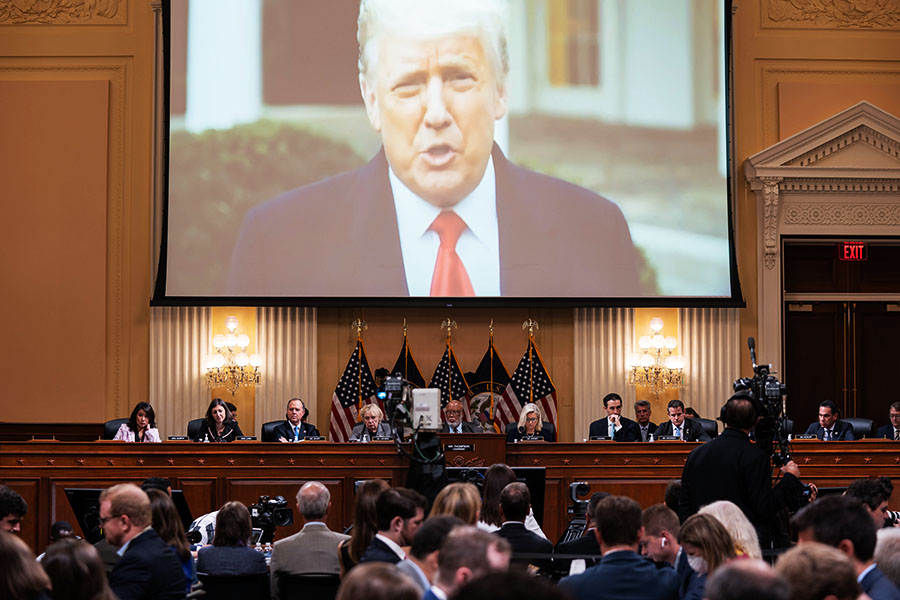 A video released by former President Donald Trump on Jan. 6 is played during testimony by Cassidy Hutchinson, who worked for former President Trump’s chief of staff, before the House committee investigating the Jan. 6 attack on the Capitol, on Capitol Hill in Washington, June 28, 2022. In the final, frenzied days of his administration, Trump’s behavior turned increasingly volatile as he smashed dishware and lunged at his own Secret Service agent, according to testimony. (Haiyun Jiang/The New York Times)

WASHINGTON — He flung his lunch across the room, smashing the plate in a fit of anger as ketchup dripped down the wall. He appeared to endorse supporters who wanted to hang his own vice president. And in a scene laid out by a former aide that seemed more out of a movie than real life, he tried to wrestle away the steering wheel of his presidential vehicle and lunged at his own Secret Service agent.

Former President Donald Trump has never been seen as the most stable occupant of the Oval Office by almost anyone other than himself, but the breathtaking testimony presented by his former aide, Cassidy Hutchinson, at Tuesday’s House select committee hearing portrayed an unhinged commander in chief veering wildly out of control as he desperately sought to cling to power and egged on armed supporters to help make it happen.

The president that emerged from her account was volatile, violent and vicious, single-minded in his quest to overturn an election he lost no matter what anyone told him; anxious to head to the Capitol to personally disrupt the constitutional process that would finalize his defeat; dismissive of warnings that his actions could lead to disaster; and thoroughly unbothered by the prospect of sending to Congress a mob of supporters that he knew included people armed with deadly weapons.

A president who liked to describe himself as a “very stable genius” was anything but that as Hutchinson observed in those final, frenzied days of his time in office. Hers was not a description that surprised many of those who worked for Trump and had seen him up close in the preceding four years or, for that matter, many who had known him in the decades that preceded his life in politics. But hearing her recount it all under oath, on live television, brought home how much Trump and his White House spiraled in its perilous last chapter.

“This is f-ing crazy,” Pat Cipollone, his White House counsel, declared at one point on Jan. 6, 2021, as Hutchinson recalled it, when Trump was busy castigating Vice President Mike Pence rather than trying to call off the attack on the Capitol.

Cipollone was not the only one who thought so. By Hutchinson’s account, Secretary of State Mike Pompeo and other members of the Cabinet were so concerned about Trump’s behavior that they discussed invoking the 25th Amendment, used to remove a president deemed unable to discharge his duties.

Trump, who regularly accuses his critics of being “crazy” and “psycho,” bombarded his new social media site during the hearing Tuesday with posts assailing Hutchinson and denying the most sensational anecdote she provided to the committee.

“Her Fake story that I tried to grab the steering wheel of the White House Limousine in order to steer it to the Capitol Building is ‘sick’ and fraudulent, very much like the Unselect Committee itself,” Trump wrote on his Truth Social website. “Her story of me throwing food is also false.”

A Secret Service spokesperson said in a statement that the agency would respond on the record to the House committee about Hutchinson’s account of what happened in the armored car.

Secret Service officials who requested anonymity to discuss the potential testimony said that both Robert Engel, the head of Trump’s protective detail, and the driver of Trump’s sport utility vehicle were prepared to state under oath that neither man was assaulted by the former president and that he did not reach for the wheel. The officials said the two men would not dispute the allegation that Trump wanted to go to the Capitol.

Hutchinson did not witness the scene in the vehicle herself but said she was informed about it moments later by Anthony Ornato, the president’s deputy chief of staff and a former Secret Service agent, with Engel present in the room and not disputing it.

Either way, other veterans of the Trump White House who have broken with the former president said Hutchinson’s testimony resonated with their own experiences. Trump was prone to temper tantrums, slamming his hands down on his desk and screaming at advisers he considered insufficiently loyal. As Hutchinson said, his destruction of dishware during an outburst following the election was hardly the first time he had taken his wrath out on the White House china.

“His temper was scary. And swift,” Stephanie Grisham, who served as his White House press secretary and communications director and as Melania Trump’s chief of staff, said after the hearing Tuesday. “He’d snap and almost lose control.”

She related a number of examples in her tell-all book published after she left office and noted that when Trump descended into rage, his staff resorted to summoning an aide, nicknamed the Music Man, to play favorite show tunes they knew would soothe him, including “Memory” from the Broadway musical “Cats.”

Trump’s mental state was a regular issue throughout his four years in office, and the notion of declaring him unfit to serve through the application of the 25th Amendment came up inside his own administration even in its early months.

Bookshelves were filled with volumes speculating about his psychological health. His speech patterns were analyzed for signs of dementia. His own niece, Mary Trump, a clinical psychologist, declared that he had “so many pathologies” and “demonstrates sociopathic tendencies.” At one point during the 2020 campaign, he took a cognitive test to prove his mental acuity, reciting in order, “Person. Woman. Man. Camera. TV.”

Some advisers came to the conclusion that Trump deteriorated after losing the election to Joe Biden on Nov. 3. Former Attorney General Bill Barr, whose public statement Dec. 1 that there was no evidence the election was stolen prompted Trump to attack his lunch, told the House committee that the president seemed increasingly unbalanced.

“I thought, boy, if he really believes this stuff, he has lost contact with — he’s become detached from reality,” Barr testified.

The reality conveyed by Hutchinson, a top aide to Mark Meadows, the White House chief of staff, became more disturbing on the day that Congress convened to count the Electoral College votes confirming Trump’s defeat. He lashed out and gave every indication that he knew the crowd of supporters he had gathered on the Ellipse included some bent on violence. Told that some trying to attend his rally were armed, he snapped that the Secret Service should remove its magnetometers and let them in.

The fact that he then told them to march to the Capitol, knowing they were armed, did not daunt him in the least, as far as she could tell.

He wanted to go with them and told the crowd that he would, even though advisers had pronounced it a phenomenally bad idea. “We’re going to get charged with every crime imaginable” if he headed to the Capitol, Cipollone had warned a few days earlier.

When Trump climbed into the armored presidential sport utility vehicle after his speech on the Ellipse, the Secret Service began to take him back to the White House, prompting him to erupt. “I’m the f-ing president. Take me up to the Capitol now,” he ordered.

Robert Engel, the lead agent, told him he had to go back to the West Wing. At that point, according to the account Hutchinson later heard, the president reached up toward the front of the vehicle to grab at the steering wheel. Engel grabbed his arm. “Sir, you need to take your hand off the steering wheel,” the agent reportedly said. “We’re going back to the West Wing. We’re not going to the Capitol.”

According to the version relayed to Hutchinson, Trump then used his free hand to lunge toward the agent at his clavicle. But it did not make a difference.

The president was taken back to the White House, where he watched the action the rest of the day on television — upset not at the violence unleashed in his name but at its failure to change the election outcome.