Post-5G auctions: What plays out now?

The auctions saw record demand, but rollout of 5G stacks is expected only in late-2022 as infrastructure support is not complete. Giants Jio and Bharti likely to face two to three tough quarters due to higher capex spend; ARPUs will, however, get a boost as products start rolling out 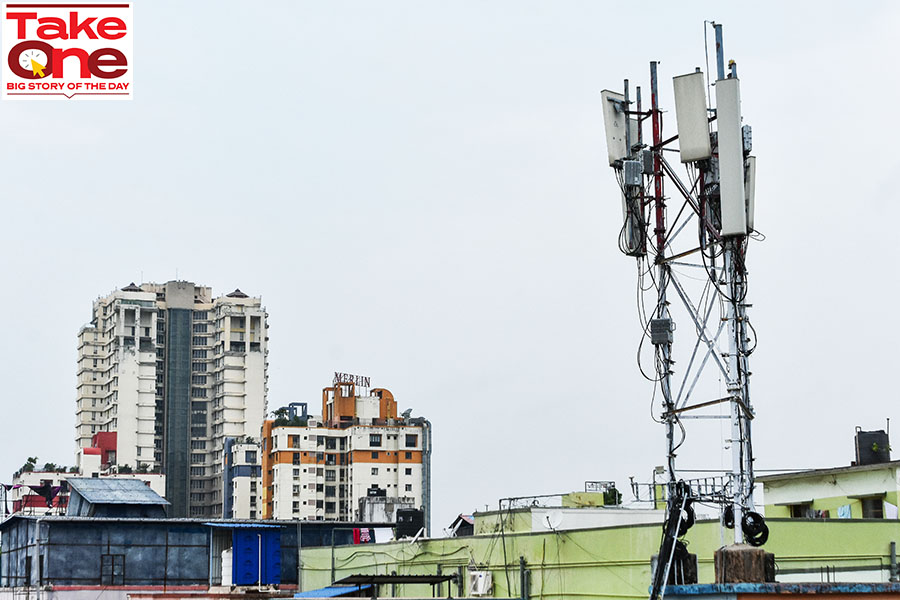 The infrastructure to support 5G technology is not ready, starting with fibreisation of towers. Existing radio towers need to be connected by optic fibre cables. Currently, only about 33 percent of telecom towers in India are connected by fibre Image: Debarchan Chatterjee/NurPhoto via Getty Images

India’s first ever 5G spectrum auction has not only seen a record number of bids in its three-day auction, but the pattern of bidding has also indicated what some major telecom companies might be planning for the future. The auction for 72 GHz of airwaves, which is now expected to close on July 29, means, of course—not just three days of successful and competitive bidding across various bands but also at least over the near term—some pressure on the balance sheets for operators such as market leader Reliance Jio and nearest rival Bharti Airtel in the coming two to three quarters, as network and operating costs towards 5G infrastructure and expansion continue to climb.

But future spectrum auctions are likely to become even more competitive, experts say. The infrastructure-focussed Adani Group, whose subsidiary Adani Data Networks has put in an earnest token deposit (EMD) of Rs100 crore—which indicated muted and limited action in this year’s auction—might be testing the waters. By next year, there will be visibility on Vodafone Idea (VI) ability to find that magical investor to ensure long-term financial viability and also what the government plans to do with the near-33 percent stake it holds in the company.

“The ratio of EMD bids and Day 1 strategy focussed on specific bands and laid out the right foundation for a very positive 5G spectrum auction in 2022. On Day 1, telcos in aggregate committed to Rs1.45 lakh crore and utilised more than 75 percent of the EMD amount allocated to the spectrum; Day 2 was expected to be focussed on 3.5 Ghz for the telcos to focus on 900, 1800 and 2100 MHz bands,” says Purushothaman KG, partner and head (digital solutions and telecom leader), KPMG India. “It was unexpected for the whole EMD to be utilised and bidding to close within Rs1.55 lakh crore.”

The government has received record bids of Rs1.49 lakh crore after at least 16 rounds in the three days of auctions till July 28, including demand towards the costlier 700 MHz band, says Union Minister of Telecom Ashwini Vaishnaw. He adds that he was “pleasantly surprised” that the auction was moving into Day 3 (Thursday) adding that the sector is starting to look past legacy issues. 5G spectrum allocation is expected by mid-August, the minister had said earlier. 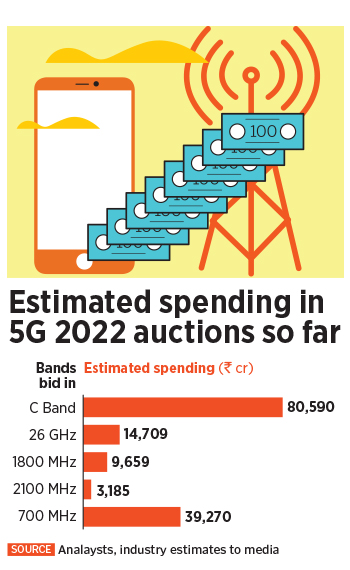 The 700 MHz is a premium spectrum band which can provide enhanced network coverage for customers. However, until now, telcos had stayed away from bidding for this band due to its price.

The expanding universe of wireless retail customers and enterprises will hope for a rollout of 5G services soon. But that is only expected to happen by end of 2022. The infrastructure to support 5G technology is not ready, starting with fibreisation of towers. Existing radio towers need to be connected by optic fibre cables. Currently, only about 33 percent of telecom towers in India are connected by fibre and the National Broadband Mission estimates that this figure could rise to 70 percent by 2024. 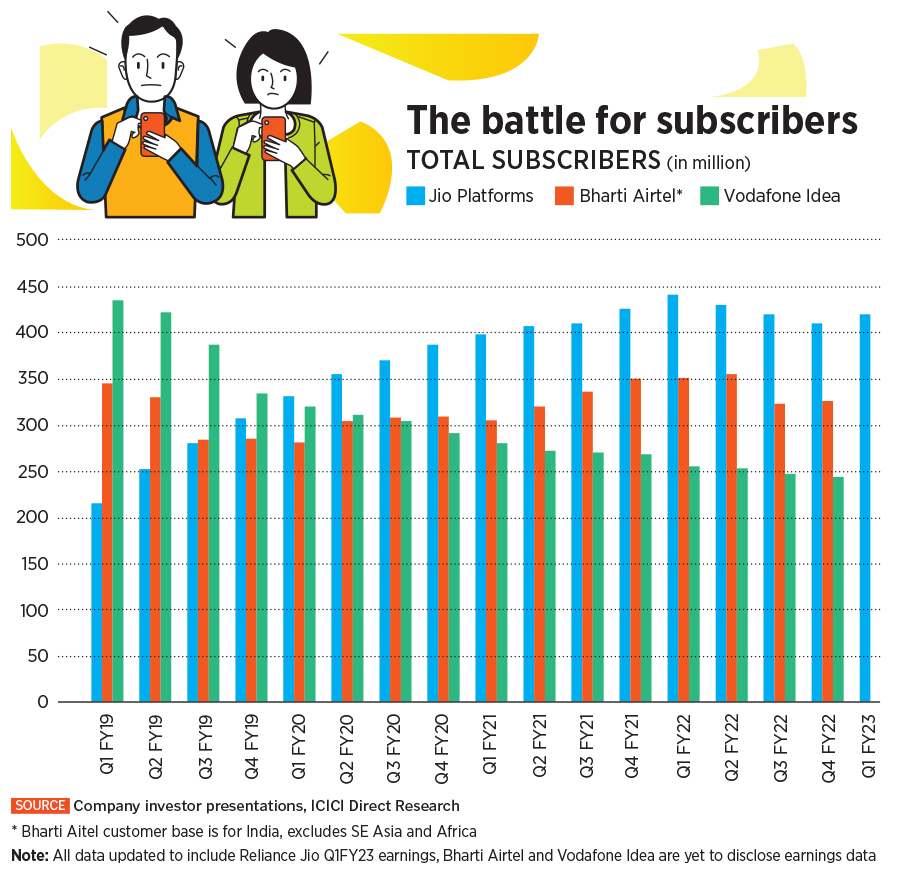 “India is not yet ready in terms of 5G infrastructure. The current fibreisation of towers needs to go up to 60 to 70 percent, which could take at least 12 to 18 months,” says Sunil David, a former regional director (IoT) at AT&T India. “5G handset prices also need to be reset,” adds David, who as co-chair, digital communications working group, IET Future Tech Panel, now consults and advises Indian telecom startups.

KPMG’s Purushothaman says less than 10 percent of the handsets are 5G-ready. “The network equipment from OEMs (original equipment manufacturers) is also unavailable at this stage. However, the government initiatives, including the partnership between Indian Telephone Industries (ITI) Limited and Centre for Development of Telematics (C-DOT) to drive the ‘Make in India’ stack, will help expedite the rollouts,” he argues. There are still no clear timeframes though.

And while the 5G acceptance would be ready, clearly the infrastructure needs to be prioritised. Bharti Airtel’s managing director and CEO Gopal Vittal in May had told analysts in their Q4FY22 earnings call: “I would say that this is going to be a modular rollout. Is this going to be an aggressive rollout in the short term? The economics do not suggest that it can be, simply because the ecosystem is still very nascent. So, I think it is a game that we are going to wait and watch, and see how it plays up.”

Also read: Is 5G truly green, or will it burn up more resources?

The main three telcos do expect improved revenues and margins once 5G products start to rollout in a major way. Of course, till then there could be pressure on their balance sheets if they decide to accelerate the rollout quicker than expected. “The next two to three quarters will have an impact on their balance sheets as they need to bring a percentage of their EMD upfront,” says David.

IIFL Securities’ analyst Balaji Subramanian has, in a note issued to clients prior to the auction, spelt out two scenarios which could see Jio’s net debt-to-Ebitda climb as of end-FY23, but this would all depend on the bidding for the 700 MHz and the 850 MHz bands in the auction. The details are yet to be announced. 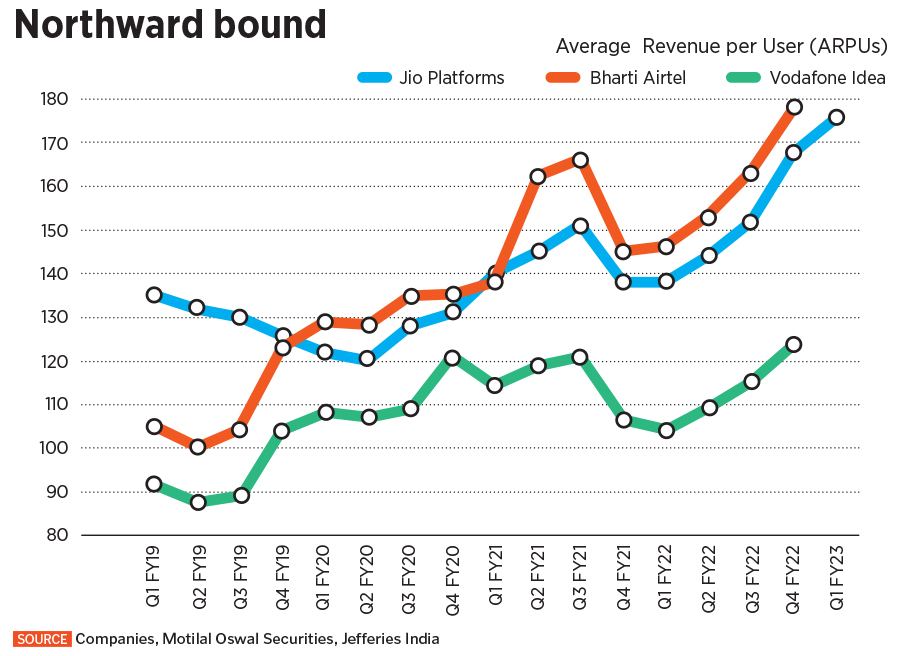 KPMG estimates the debt levels in telcos to exceed Rs4 lakh crore in FY23. “Every telco has its own way to fund its spend on spectrum. It will be interesting to see how the tariff structures are worked out by telcos to drive operational leverage to drive debt financing,” Purushothaman says. He expects between 12 and 14 months for passive infrastructure rollouts in Tier 1 and II cities. “Enterprise use cases through network slicing will see a quick rollout within six months,” he adds.

While average revenue per user (ARPU) has been on the rise through much of 2021, historically, Indian telcos have refrained from charging a premium for 4G plans (vs 2G/3G data plans). “With potentially higher speed on offer and likely initial uptake from premium customers (smartphones above Rs15,000), there is potential for telcos to charge a premium for 5G (versus 4G),” says Nomura’s Bansal. There is a strong possibility that 5G tariff plans would be monitorable in the near term, he adds, and 5G premium (versus 4G) may provide the next leg of ARPU uptick for telcos.

What does the latest round of bidding mean for the future of the Adani Group in this space? The Adani Group has been quiet in its communication regarding its strategy in the telecom space  and had said it was participating in the 5G spectrum auction “to provide private network solutions” along with enhanced cyber security in airports, ports & logistics, power generation, transmission, distribution and various manufacturing operations.

David, however, says: “In my personal view, [the group] is setting itself up for a greater role. We are likely to see a scenario where the group will test the waters and see how its technology pans out and then decide on the financial viability to buyout VI. For India, it is always advantageous to have three players rather than two. I see a scenario where they will want to buy out the current government stake in VI and later set themselves up to buy out the promoters’ stakes.”

Tweets by @forbesindia
SpiceJet told to cut fleet after safety incidents
Russia's war has killed 75,000 in Ukraine: US