After its bet on Symbian infrastructure instead of Android turned sour for Nokia's handsets business, Nokia Network was born and it silently transformed from a frontend player to a backend one—today "every call made in India touches a Nokia element" 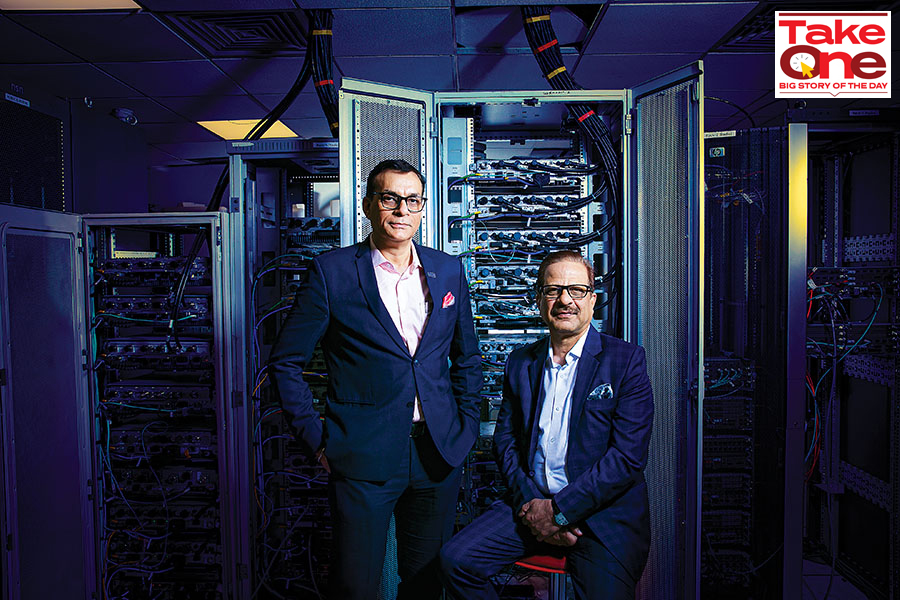 The meeting starts at 10.30. It’s a blustery Friday morning; the pre-monsoon showers have finally had their date with a sweltering Delhi-NCR region towards the fag end of June, and suddenly the murky view from the seventh floor of one of the towering buildings of Cyber City in Gurugram turns crystal clear. As the rain beats down heavily on suspended dust in the smoky air, a cluster of distant office buildings and telecom towers move away from the blind spot. Even a bold red Airtel billboard becomes clearly visible.

Inside the building, a visibly-excited Amit Marwah checks his Nokia smartphone, which has stayed muted for a while. A minute later, his iPhone buzzes. “Every call made in India touches a Nokia element somewhere in the call flow,” beams the chief marketing officer (CMO) of Nokia, who joined Nokia Siemens in 2005 and has had stints with Lucent, Motorola and Huawei before joining the Finnish telecom major in 2011. Consumers, explains Marwah, know their mobile service provider, whether it’s Airtel, Reliance or Vodafone Idea. What they don’t know, though, is the fact that Nokia is the invisible force behind all of them. The CMO shares another fact: The first call in India was made on a Nokia phone and Nokia network.

In India, there have been three Nokias: A visible, a fast-fading-yet-visible and an invisible. The visible Nokia was the Nokia in its original avatar, when the Finnish major used to lord over the Indian market with over 40 percent market share in 2008, the year Nokia opened its Chennai plant. The thumping domination ended with Nokia’s wild and fatal bet on the Symbian operating system at the cost of dumping Android, and in 2013, Microsoft ended up buying the mobile phone business of Nokia. 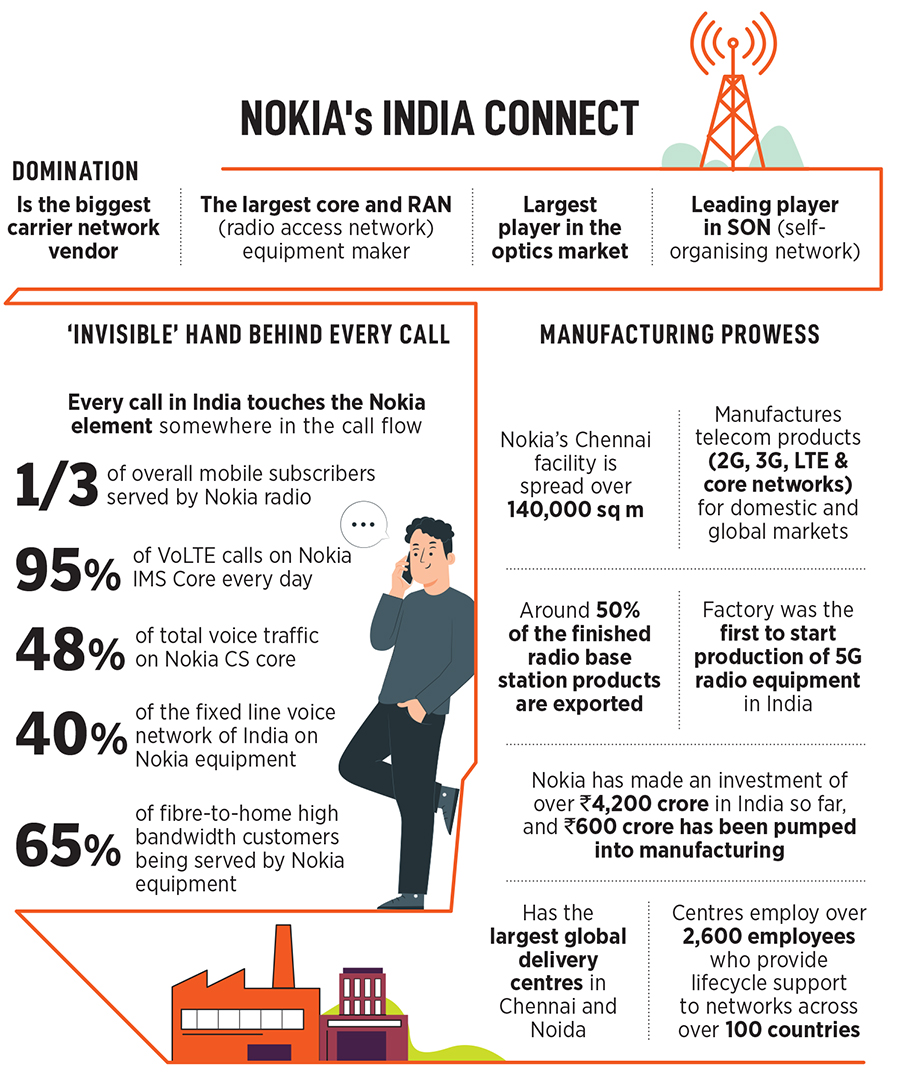 Globally, during the same time, Nokia Networks was born, following the buyout of joint-venture partner Siemens in 2013. Nokia decided to silently transform itself from a frontend to a backend player, which meant moving away from handsets into primarily a network hardware and software provider. A few years later, in 2016, came the second avatar of Nokia. It re-entered the mobile handset market through a licensing agreement with HMD Global, which got the rights to sell phones and tablets under the Nokia brand.

Back in India, five years into the second innings with HMD, Nokia has almost negligible market share in smartphones. It’s almost invisible. Another area of visibility—a licensing deal with Flipkart to roll out Nokia branded smart TVs and laptops from 2019 onwards—too doesn’t have any visible signs of success.

Marwah, though, is not bothered. Nokia, in its third invisible avatar of networks and infrastructure provider for telecom operators and enterprises, has taken a pole position in the country which happens to be the biggest in terms of headcount. The CMO shares his reasons for excitement. Around one-third of overall mobile subscribers in the country are served by Nokia networks; 95 percent of VoLTE (voice over LTE) calls happens on Nokia every day; 40 percent of the fixed line voice network of India happens on Nokia equipment, and 65 percent of fibre-to-home high bandwidth customers are being served by Nokia equipment.

The India report card has other glowing achievements. Nokia is the biggest carrier network vendor in the country. It’s also the largest core and radio access network (RAN) equipment maker, biggest in the optics market and a leading player in self-organising network (SON). “We are the backroom boys of the telecom revolution in India,” smiles Marwah. The overwhelming perception of the brand in India, he underlines, is still that of a handset maker. “Call it the magic of a powerful brand recall and equity,” he says. As CMO of Nokia, he lets on, people still reach out to him with handset-related queries. “Networks is the untold story of Nokia in India,” he adds. 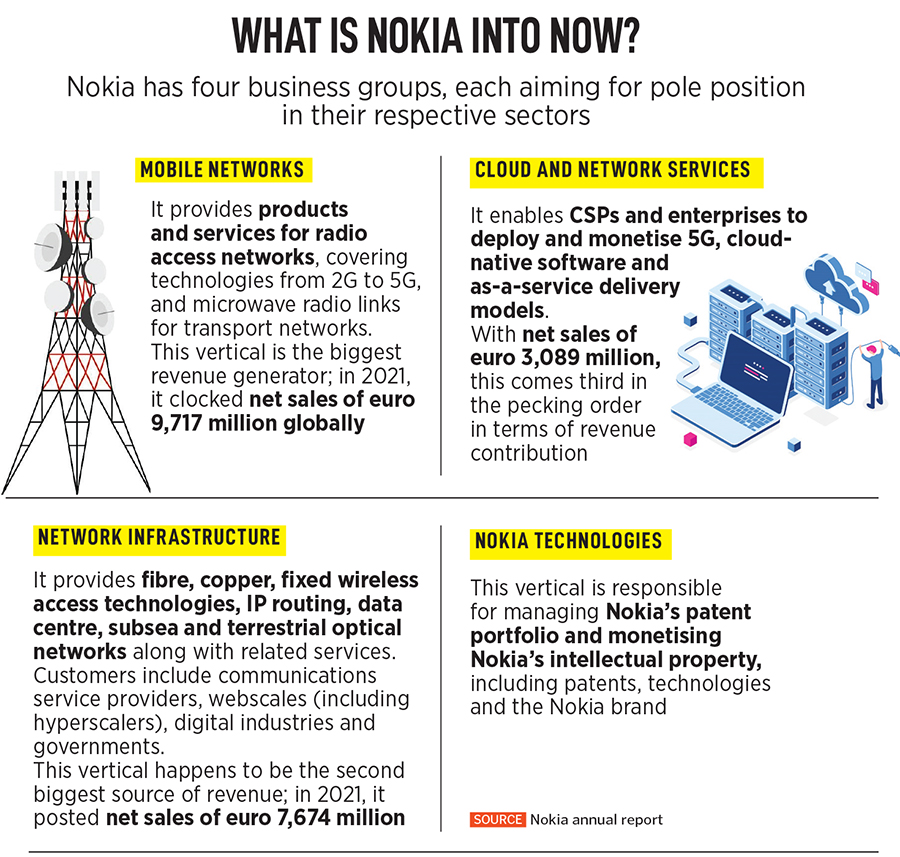 In April, Nokia CEO Pekka Lundmark underlined the importance of India in the global scheme of things. “India is the number one country in terms of employment for Nokia,” he said. India, the CEO added, is one of the largest markets in the world and now entering an extremely important stage with the introduction of 5G and the upcoming auctions. “India is also a significant manufacturing base for us,” remarked Lundmark, adding that India is on top of the list in terms of priority for Nokia. 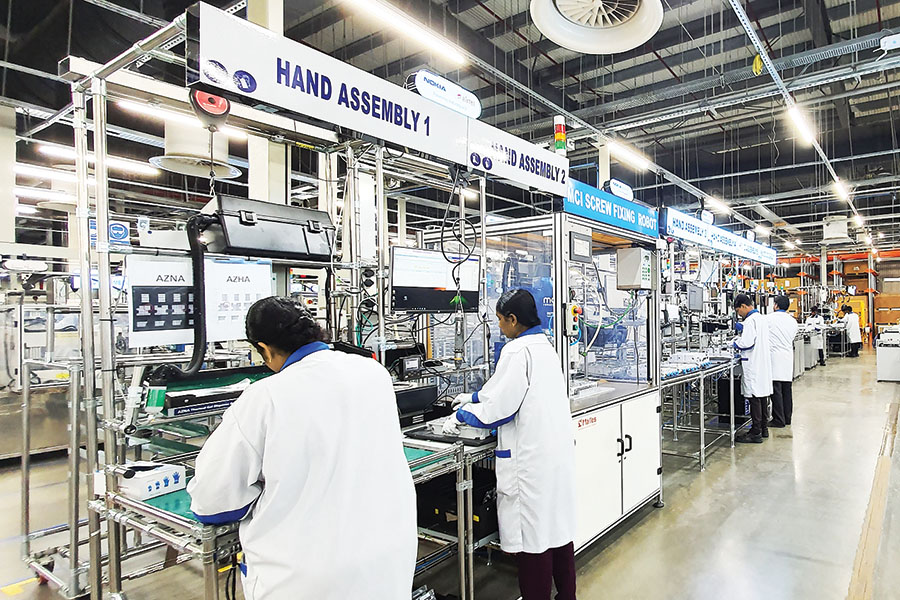 Back in Gurugram, country head of Nokia, Sanjay Mallik, highlights the manufacturing might of Nokia in India. Started in 2008, the Chennai facility is spread over 140,000 sq m, and manufactures telecom products (2G, 3G, 4G, LTE and core networks) for domestic and global markets. Around 50 percent of the finished radio base station products are exported from the factory, which was the first to start production of 5G radio equipment in India. So far, Nokia has made an investment of over ₹4,200 crore in India, including ₹600 crore in manufacturing. The Finnish major also has its largest global delivery units at Chennai and Noida. The centres have over 2,600 employees who provide lifecycle support to networks across 100 countries. “Nokia is the largest telecom exporter from India,” claims Mallik. Nokia, he underlines, continues to look for opportunities to grow its manufacturing base to increase production to cater to the world market.

Though the Chennai unit provided the much-needed foundation to move fast in India, the ride got bumpy at times. Marwah reflects. At one point, there were 13 operators running networks in India. “It was a crowded and difficult market,” he says. What helped the company globally as well as in India was its constant effort to reinvent. “We reinvented yet stayed humble,” he says. What also helped was its willingness to play a long game in India. “We could see scale in India,” he says. Though production-linked incentive (PLI) schemes of the Indian government helped all companies boost manufacturing in the country, starting early in terms of making investments gave it a massive edge. “We believed in the promising prospects of the country,” he says.

The reinvention of Nokia, reckon telecom and industry analysts, has indeed made it a force to reckon with globally. Over the last decade, Nokia restructured and carved out four distinct business groups, each aiming for pole position in their sectors. First is ‘mobile networks’—the biggest revenue generator for Nokia. This division provides products and services for radio access networks covering technologies from 2G to 5G, and microwave radio links for transport networks.

Back in India, Nokia has been making its presence felt, both in a wired and wireless manner. “Nokia is still an important part of the Indian telecom industry,” contends Charu Paliwal, research analyst at Counterpoint Research. It is closely working with Indian operators on their 4G network expansion as well as laying the foundation for rolling out 5G services. In 2020, she lets on, Nokia signed a deal with Airtel to expand the operator’s 4G coverage and deploy three lakh radio units by 2022.

Earlier this year, it was reported that Nokia is set to replace Huawei radio equipment for Vodafone Idea. Coming to 5G networks, Nokia claimed to achieve a top speed of 9.85 GBps on Vodafone Idea network during 5G trials in late 2021. Around the same time, Airtel also announced a successful 5G trial in partnership with Nokia. “One can say that the vendor is very much an integral part of connectivity services in India,” she underlines. The spectrum auction conducted in March 2021, Paliwal points out, fuelled 4G coverage and capacity expansion plans of operators, which helped Nokia boost its business in India. “Nokia’s annual sales recorded a growth of 9 percent year-on-year for 2021,” she says. “We expect business to get a boost with the arrival of 5G.” 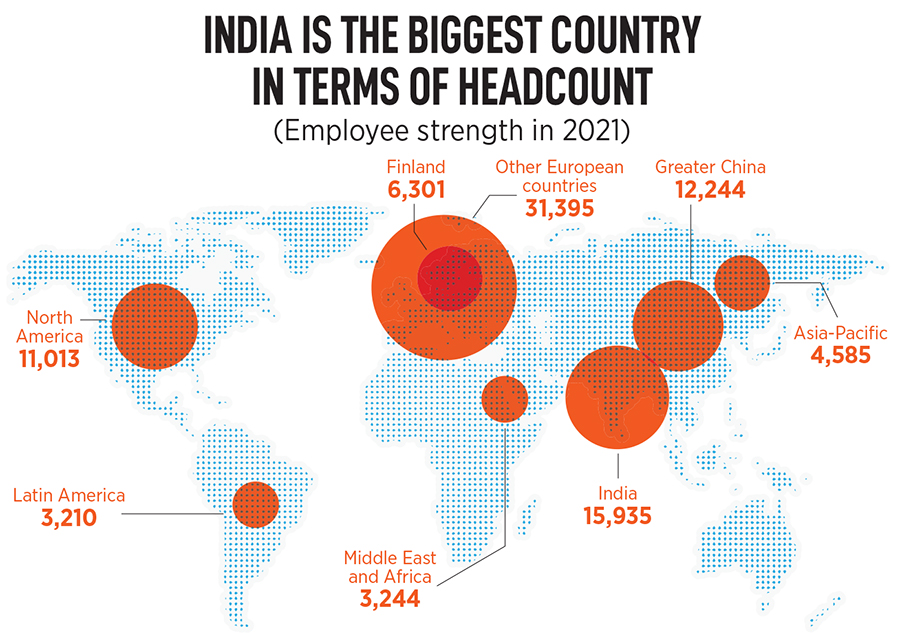 Nokia is no longer confining itself to the telecom sector. “It is gaining a foothold in private networks space in India,” reckons Paliwal. Nokia’s go-to-market for the country appears to be selling private network solutions through operators but it is also clear in engaging with enterprises directly. “It has collaborated with Tech Mahindra to deploy 5G-based enterprise solutions,” she adds.

Marwah lists out four areas that Nokia is bullish on: 5G, fixed broadband, enterprise and software. “We will play a significant role in not only the telecom operator space but many other industries,” he says. Enterprise, he maintains, will be the next big growth engine.

Mallik talks about the massive headroom for growth brought about by PLI. The government, he lets on, announced an allocation of around ₹4,000 crore for the PLI scheme to boost 5G design-led manufacturing. Extending these incentives to multinational telecom vendors with strong manufacturing and R&D facilities in India along with reduction in import duty on telecom components will help make manufacturing cost competitive and strengthen the overall manufacturing ecosystem.

Nokia 3.0 is clearly much bigger and sustainable than its earlier avatars. And an impending 5G rollout is only going to strengthen Nokia and its network play.

Tweets by @forbesindia
The great skills reset: Are you a 'da Vinci marketer'?
Ethereum gas fee falls to the lowest since 2020