Wheat prices were already high before the Russian invasion of Ukraine, and surged even higher after it, exceeding 400 euros ($418) per tonne in May on the European market, double its level last summer 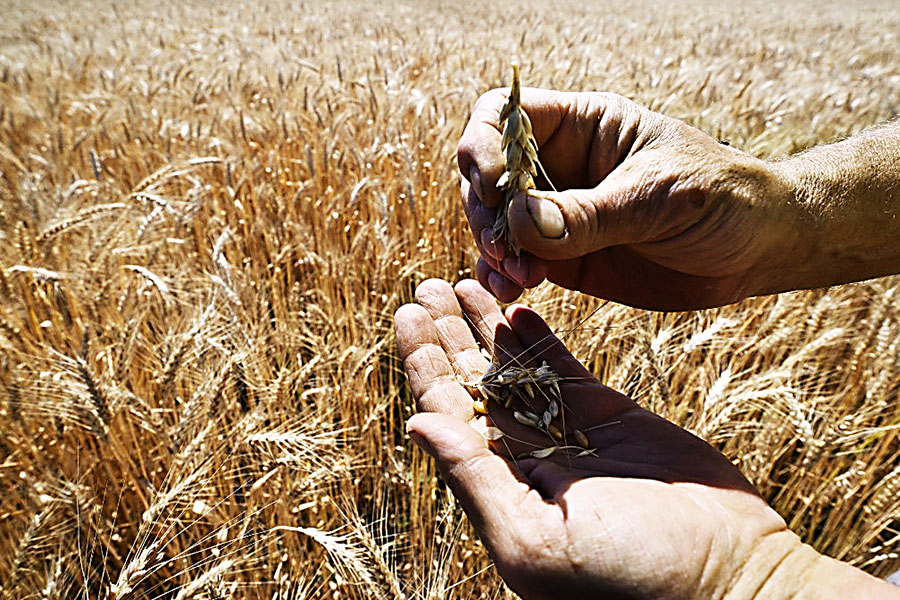 Farmer Serhii Liubarsky, 59, shows wheat grains at a wheat field next to Rai-Oleksandrivka village, on July 1, 2022, amid Russia's military invasion launched on Ukraine. Between a lack of fuel and the risk of being bombed, some Ukrainian farmers are wondering how they will harvest their fields as the period for certain crops approaches in July. Image: Genya Savilov / AFP

Paris, France: Russia's invasion of agricultural power Ukraine has severely disrupted the global wheat market, prompting warnings that the conflict could lead to hunger in some countries.

Why is wheat irreplaceable?

Wheat is milled into flour to make a huge range of foods, from bread to pasta to desserts.
"Everyone eats wheat, but not everyone is capable of producing it," says Bruno Parmentier, an economist and author of the book "Feeding Humanity".

Only around a dozen countries produce enough wheat to be able to export it, too.
China is the world's top producer but is also a major importer of the commodity to feed its 1.4 billion people.
Russia, the United States, Australia, Canada and Ukraine are the world's top exporters.
Egypt, Indonesia, Nigeria and Turkey are among the top importers.

Why are wheat prices high?

Grain prices were already high before Russia began its invasion of Ukraine in February.
There were several factors behind the increases: Energy prices soared as economies bounced back from Covid lockdowns, sending costs for nitrogen-based fertilisers higher.
The end of Covid restrictions also led to major disruptions to global supply chains as demand surged for all sorts of products.
In addition, a heatwave in Canada led to a dismal harvest in the country last year.

Why did the war worsen things?

Wheat prices surged even higher after Russian troops stormed Ukraine, exceeding 400 euros ($418) per tonne in May on the European market, double its level last summer.
The higher costs are dramatic for developing countries. More than 30 nations depend on Russia and Ukraine for 30 percent of their wheat import needs, according to the UN Food and Agriculture Organization.
Also read: Global finance meeting focuses on war-driven food insecurity
The two countries, considered the breadbaskets of Europe, accounted for 30 percent of global grain exports before the war.
Their production has increased in recent years, with Russia becoming the top exporter and Ukraine closing in on third place.

What are the consequences for Ukraine?

A Russian naval blockade has prevented Ukraine from shipping out 25 million tonnes of grain that are now stuck in farms or silos at ports.
While some quantities have been transported via rail and road, exports are still six times smaller than by sea.
Also read: Russian blockade of Ukraine may unleash famine
Ukrainian farmers faced a dangerous planting season, with some having to work with flak jackets and rely on specialists to remove mines and other ordnance from fields.
Ukraine's wheat harvest is expected to fall by 40 percent this year, the country's grain association says.

Has wheat become a war weapon?

US Secretary of State Antony Blinken has branded Russia's blockade as "blackmail", saying it was a deliberate strategy by Russian President Vladimir Putin to force the rest of the world "to give in to him" and drop sanctions on Moscow.
"In times of war, big producing countries literally hold the fate of others in their hands," Parmentier said.
Turkey has spearheaded efforts aimed at resuming grain deliveries across the Black Sea and said on June 22 that four-way talks with Russia, Ukraine and the United Nations could be held in the coming weeks.

China is not expected to release wheat stocks while India has imposed a temporary ban on its exports after a heatwave hit harvests.
Global wheat production is forecast to reach almost 775 million tons in 2022-2023, 4.5 million lower than the previous year, according to the US Department of Agriculture.
Reduced production in Ukraine, Australia and Morocco will "only partly" be offset by increases in Canada, Russia and the United States, the department said.
But prices have fallen in recent weeks as harvests have started, markets have priced in the Ukraine conflict and concerns rise of a looming recession, according to experts.
By Sofia BOUDERBALA
© Agence France-Presse