War, climate change, energy costs: How the wheat market has been upended

The price of wheat has tumbled from its peak after Russia invaded Ukraine, but experts say one of the world's most widely consumed foods remains in short supply and warn that a global hunger crisis still looms 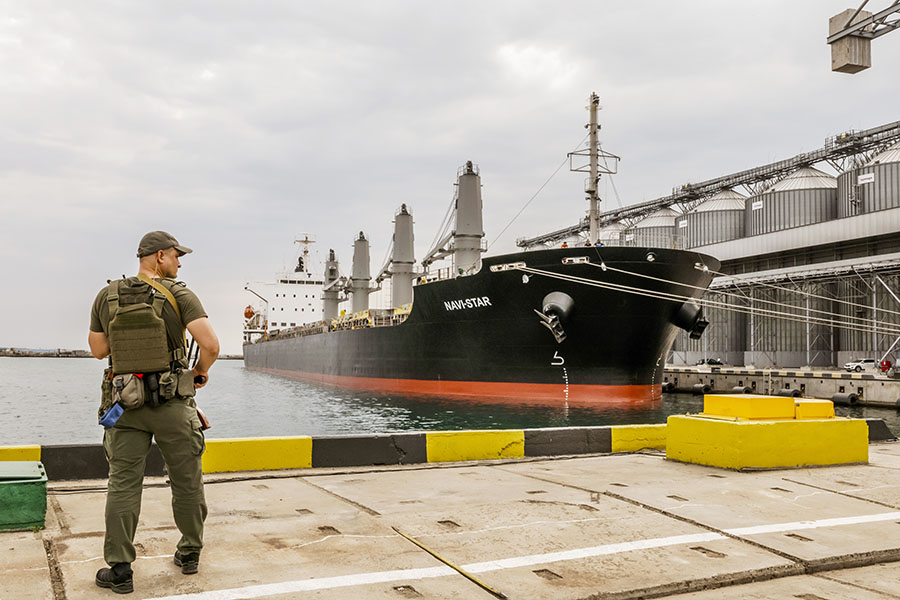 A Ukrainain soldier near grain silos during a meeting of G7 representatives, at the Odesa Port in Ukraine, July 29, 2022. The price of wheat has tumbled from its peak after Russia invaded Ukraine, but experts say one of the world’s most widely consumed foods remains in short supply and warn that a global hunger crisis still looms. (Daniel Berehulak/The New York Times)

The price of wheat has tumbled from its peak after Russia invaded Ukraine, but experts say one of the world’s most widely consumed foods remains in short supply and warn that a global hunger crisis still looms.

Like oil, steel, beef and other commodities integral to the economy, wheat shifts in price and availability in response to a complex set of overlapping factors, such as geopolitics and the weather. Although the falling price of wheat offers some respite for countries dependent on importing the crop, it may dissuade farmers from planting more. Nor does the drop in price address preexisting problems worsened by a war between two of the world’s biggest producers. Energy prices remain high, affecting the cost of running farm equipment and transporting the wheat to market as well as the cost of fertilizer. And hot, dry weather that crimps crop yields is becoming more common.

“The fundamental picture hasn’t really changed,” said Ehsan Khoman, who manages emerging-market and commodities research for Mitsubishi UFJ Financial Group, a Japanese bank. “There is a potential where food prices could spiral out of control.”

The wheat market has been on a wild ride this year.

Russia’s invasion of Ukraine caused food and fuel prices to soar, as war and sanctions disrupted supplies from two of the world’s major agriculture and energy exporters. The two countries together account for roughly one-fourth of global wheat exports, according to the U.S. Department of Agriculture.

Oil prices have eased a bit since the start of the war, although it still costs a lot more than it did at the start of the year for Americans to fill their cars with gasoline, for Europeans to heat their homes with natural gas and for just about anyone anywhere to do anything linked to the cost of oil. Wheat prices, though, have fallen to roughly where they began the year.

The price of a widely traded type of wheat that started the year about $7.70 per bushel jumped to $13 in the immediate aftermath of Russia’s invasion of Ukraine in late February, according to futures contracts traded in Chicago, a global hub for the commodity. The price mostly stayed in double digits until mid-June, when it began to fall. On Friday, wheat traded at a little more than $8 a bushel.

After the initial shock of the invasion, higher prices dissuaded some countries from buying wheat, lowering demand and weighing on prices. An uptick in supply from winter-wheat harvests has also lowered prices in recent weeks.

A deal to free trapped grain provides only partial relief.

A major factor pushing wheat prices down has been the progress of negotiations over the fate of more than 20 million metric tons of grain stuck in Black Sea ports in Ukraine. A little over a week ago, an agreement was reached to open an export corridor to allow some of the grain trapped by the war to move out across the world.

The deal may not hold amid the fighting, and even if it does, experts say it probably won’t be enough to address other issues hanging over the global wheat market.

“This agreement has been bigged up as something that will be a solution to the world’s food shortage, and it is just not,” said Tracey Allen, an agricultural commodities strategist at JPMorgan Chase & Co.

Other, more entrenched factors in the wheat market, from the prices of energy and fertilizer to climate change, could play a bigger role in determining the cost — and availability — of a loaf of bread around the world.

Droughts last year meant that even before Russia invaded Ukraine, global food markets were under pressure.

Although some regions such as Argentina saw bumper crops and Russia is expected to have a hefty harvest this summer, severe heat and low rainfall affected the amount of wheat that others could grow.

In Canada, temperatures soared to records. At the end of July 2021, about three-fourths of the country’s agricultural land was classified as abnormally dry. Canada’s wheat production dropped nearly 40% from 2020 to 2021, causing its exports to Latin America and the Caribbean to decline by over 3 million tons, according to the USDA.

The decline in global supply resulting from bad weather had already helped push up prices coming into this year. In January 2020, wheat was about 30% cheaper than it is now.

Oil prices largely determine the cost of running farm equipment and transporting harvested grain. Natural gas prices are even more important to farmers because nitrogen, used to produce fertilizers such as ammonia and urea, is produced from natural gas.

“It’s not just about grain prices — it’s shipping costs and fuel prices and fertilizer prices and so on,” said Luiz Eduardo Peixoto, an economist specializing in emerging markets at BNP Paribas.

Russia, the largest producer of fertilizer in the world, has steadily restricted the flow of natural gas to Europe, not only driving fuel prices higher but nudging up the cost of nitrogen-based fertilizers. As fertilizer prices have risen, so have wheat prices, ticking up in the past week.

Because Russian fertilizer is so important to the global farm trade, it has avoided international sanctions that have restricted other Russian exports, giving Moscow political leverage over another crucial commodity that the world needs.

Higher costs for fuel and fertilizer eat into the profit that farmers can make and create a quandary for wheat-producing nations. That is particularly true for Ukraine, where transporting wheat to buyers abroad has become costly because of the war, said Dan Basse, an agricultural economist and president of AgResource, an analytics company.

Although high prices hurt countries that import wheat, low prices might dissuade farmers from planting extra this year, especially in Ukraine as they contend with challenges selling their current crop, which could make them unable to afford to grow more.