Under a deal aimed at relieving a global food crisis following Russia's invasion of its neighbour, the first shipment was set to leave the port of Odessa, and other convoys will soon follow suit 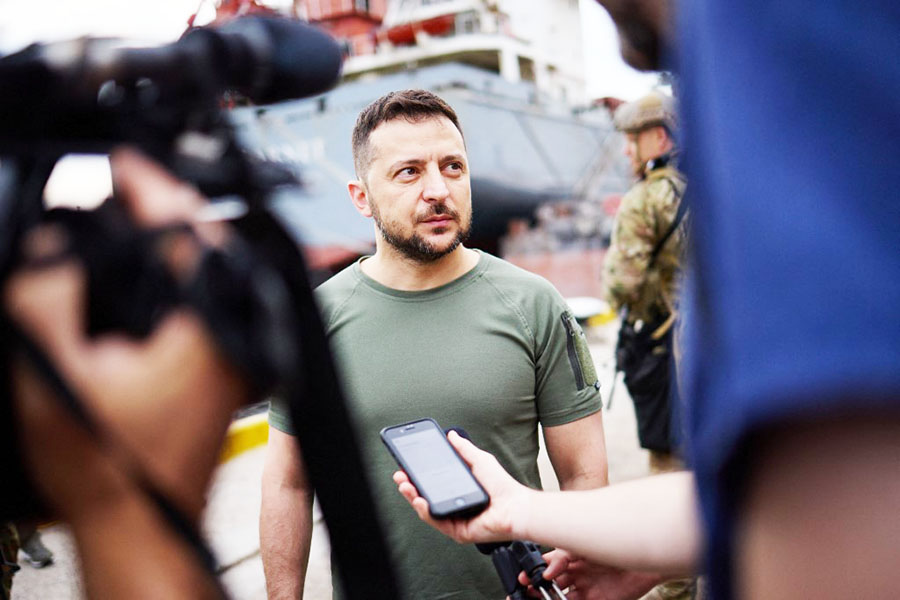 This handout picture taken and released by Ukrainian Presidential Press Service on July 29, 2022 shows the President Volodymyr Zelensky facing journalists during a visit to Black Sea port of Chornomorsk. Ukraine President Volodymyr Zelensky visits the southern port of Chornomorsk ahead of the first anticipated export of grain under a deal with Russia. Image: UKRAINIAN PRESIDENTIAL PRESS SERVICE / AFP

Ankara, Turkey: The first shipment of Ukrainian grain was set to leave the port of Odessa on Monday under a deal aimed at relieving a global food crisis following Russia's invasion of its neighbour.
"The departure of the cargo ship Razoni flying under the flag of Sierra Leone and loaded with maize will leave the port of Odessa bound for Lebanon at 08:30 am (0530 GMT)," the Turkish defence ministry said in a statement.
It was expected to reach the mouth of the Bosphorus on Tuesday at around midday, according to Yoruk Isik, an expert on ship movements on the Bosphorus Strait and in the region.

Other convoys would follow, respecting the maritime corridor and the agreed formalities in line with the agreement reached with Russia on July 22, the ministry said.
According to the Marine Traffic website, the Razoni was still docked in Odessa at 0500 GMT.
Built in 1996 and measuring 186 metres (610 feet) in length and 25 metres in width, the vessel has capacity of 30,000 tonnes.
On July 22, Ukraine and Russia signed a landmark deal with Turkey and the United Nations aimed at easing a global food crisis caused by blocked Black Sea grain deliveries.
Also read: 2.37 billion people had no access to food in 2020 Covid-19 pandemic year: UN report
Turkey formally opened a special joint coordination centre to oversee the exports in Istanbul last Wednesday, which is being staffed by civilian and military officials from the two warring parties and delegates from Turkey and the UN.
Their primary assignment involves monitoring the safe passage of Ukrainian grain ships along established routes and overseeing their inspection for banned weapons on the way into and out of the Black Sea.
The blockage of deliveries from two of the world's biggest grain exporters has contributed to a spike in prices that has made food imports prohibitively expensive for some of the world's poorest countries.
Also read: 40 million more faced acute hunger in 2021: UN
UN estimates say nearly 50 million people began to face "acute hunger" around the world as a direct consequence of the war.
Wheat prices fell sharply hours after the grain deal was signed.
© Agence France-Presse