"Since the president is out of the country, an emergency has been declared to deal with the situation in the country," said Dinouk Colombage, spokesman for Prime Minister Ranil Wickremesinghe 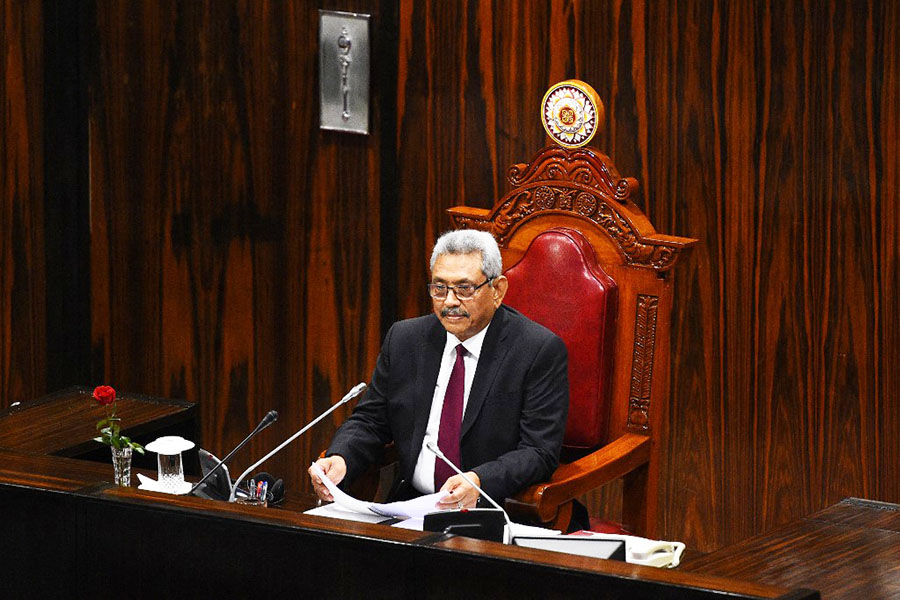 In this file photo taken on January 3, 2020, Sri Lanka's new President Gotabaya Rajapaksa makes his first policy address at the national parliament after his landslide electoral victory, in Colombo. Millions of rupees in cash left behind by President Gotabaya Rajapaksa when he fled his official residence in the capital will be handed over to court on July 11, 2022, police said. Image: Ishara S. Kodikara / AFP

Crisis-hit Sri Lanka declared an indefinite nationwide state of emergency on Wednesday, hours after President Gotabaya Rajapaksa fled the country, the prime minister's office said.
"Since the president is out of the country, an emergency has been declared to deal with the situation in the country," Dinouk Colombage, spokesman for Prime Minister Ranil Wickremesinghe, told AFP.
Police said they were also imposing an indefinite curfew across the Western Province, which includes the capital Colombo, to contain growing protests after Rajapaksa flew to the Maldives in a military aircraft.
Thousands of demonstrators had mobbed the premier's office, prompting police to fire tear gas to hold them back from overrunning the compound.

"There are ongoing protests outside the prime minister's office in Colombo and we need the curfew to contain the situation," a senior police officer told AFP.
He said they were under orders to crack down against demonstrators disrupting the functioning of the state.
Tens of thousands of men and women overran Rajapaksa's official residence on Saturday, forcing him to escape to a military base and later flee the country.
Officials said he had promised to resign on Wednesday.

Gotabaya Rajapaksa had promised at the weekend to resign on Wednesday and clear the way for a "peaceful transition of power" after fleeing his official residence in Colombo just before tens of thousands of protesters overran it.
As president, Rajapaksa enjoys immunity from arrest, and he is believed to have wanted to go abroad before stepping down to avoid the possibility of being detained.
He, his wife and two bodyguards were the four passengers on board an Antonov-32 military aircraft that took off from Sri Lanka's main international airport, immigration sources told AFP.
On arrival in the Maldives, they were driven to an undisclosed location under police escort, an airport official in the capital Male said.
Smiling Sri Lankans again thronged the corridors of the president's official residence after his departure on Wednesday, with young couples walking around hand in hand in a mood of quiet celebration.
Also read: Sri Lankans return to cooking with firewood as economy burns
"People are very happy, because these people robbed our country," said retired civil servant Kingsley Samarakoon, 74. "They've stolen too much money, billions and billions."
But he held little hope for an immediate improvement in Sri Lanka's plight. "How are people going to run the country without money?" he asked. "It's a problem."

The departure of the 73-year-old leader once known as "The Terminator" had been stymied for more than 24 hours in a humiliating stand-off with immigration personnel in Colombo.
He had wanted to fly to Dubai on a commercial flight, but staff at Bandaranaike International withdrew from VIP services and insisted that all passengers had to go through public counters.
The presidential party was reluctant to go through regular channels, fearing public reactions, a security official said, and as a result, missed four flights on Monday that could have taken them to the United Arab Emirates.
Clearance for a military flight to land in nearby India was not immediately secured, a security official said, and at one point on Tuesday the group headed to a naval base with a view to fleeing by sea.
Also read: Lavish projects and meagre lives: The two faces of a ruined Sri Lanka
Rajapaksa's youngest brother Basil, who resigned in April as finance minister, missed his own Emirates flight to Dubai early Tuesday after a tense standoff of his own with airport staff.
Basil—who holds US citizenship in addition to Sri Lankan—tried to use a paid concierge service for business travellers, but airport and immigration staff said they had withdrawn from the fast-track service.

Basil had to obtain a new US passport after leaving his behind at the presidential palace when the Rajapaksas beat a hasty retreat to avoid mobs on Saturday, a diplomatic source said.
Official sources said a suitcase full of documents had also been left behind at the stately mansion along with 17.85 million rupees (about $50,000) in cash, now in the custody of a Colombo court.
Also read: Cash-strapped Sri Lanka to sell 'golden' visas
The prime minister's office confirmed Wednesday that Rajapaksa had left the country, but said it had no schedule for any resignation announcement.
Rajapaksa is accused of mismanaging the economy to a point where the country has run out of foreign exchange to finance even the most essential imports, leading to severe hardships for its 22 million people.
If he steps down as promised, Prime Minister Ranil Wickremesinghe will automatically become acting president until parliament elects an MP to serve out the presidential term, which ends in November 2024.
But Wickremesinghe has himself announced his willingness to step down if consensus is reached on forming a unity government.
The succession process could take between three days—the minimum time taken to convene parliament—and a maximum of 30 days allowed under the statute. If Rajapaksa does step down Wednesday, the vote would take place on July 20, the parliamentary speaker has said.
The leader of the main opposition Samagi Jana Balawegaya party, Sajith Premadasa, who lost the 2019 presidential election to Rajapaksa, has said he will stand for the position.
Premadasa is the son of former president Ranasinghe Premadasa, who was assassinated in a Tamil rebel suicide bombing in May 1993.
Also read: Disaster tourism: Blackouts, shortages hit Sri Lanka recovery hopes
Sri Lanka defaulted on its $51-billion foreign debt in April and is in talks with the IMF for a possible bailout.
The island has nearly exhausted its already scarce supplies of petrol. The government has ordered the closure of non-essential offices and schools to reduce commuting and save fuel.
© Agence France-Presse

Tweets by @forbesindia
Cryptocurrency: Is there hope beyond a dark winter?
Western Europe wilts under second heatwave in weeks