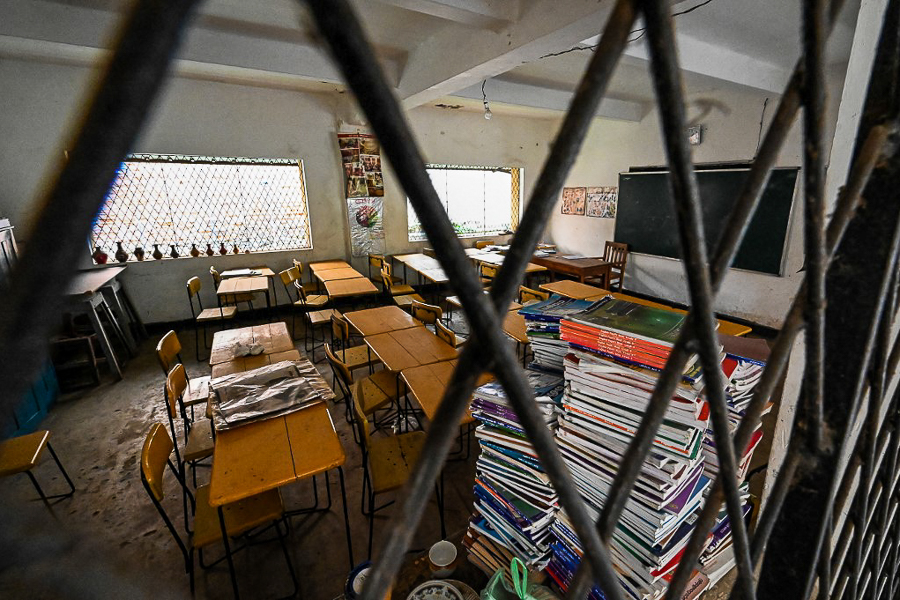 A closed classroom is seen at a government school in Colombo on June 20, 2022, after Sri Lanka closed schools and halted all non-essential government services during a two-week shutdown to conserve fast-depleting fuel reserves as the International Monetary Fund opened talks with Colombo on a possible bailout. Image: Ishara S. Kodikara / AFP

Colombo, Sri Lanka: Sri Lanka closed schools and halted non-essential government services on Monday, starting a two-week shutdown to conserve fast-depleting fuel reserves as the IMF opened talks with Colombo on a possible bailout.
The country of 22 million people is in the grip of its worst economic crisis after running out of foreign exchange to finance even the most essential imports including food, fuel and medicines.
On Monday schools were shut and state offices worked with skeleton staffing as part of government plans to reduce commuting and save precious petrol and diesel.
Sri Lanka is facing record-high inflation and lengthy power blackouts that have contributed to months of protests—sometimes violent—calling on President Gotabaya Rajapaksa to step down.
Thousands of students marched through the streets of Colombo on Monday chanting "Gota go home" in reference to the president, who they accuse of corruption and mismanagement.
"The time for Gotabaya to bow down with dignity is long gone," student leader Wasantha Mudalige told reporters. "Now we have to chase him out."

Police arrested 21 student activists who blocked all gates to the presidential secretariat building while declaring Monday, Rajapaksa's 73rd birthday, a "day of mourning" for the nation.
Officers said the students had blocked Sri Lanka's finance ministry secretary from attending a key meeting with officials from the International Monetary Fund.
But the office of Prime Minister Ranil Wickremesinghe said talks with a visiting IMF delegation, the first in-person discussions since Sri Lanka asked for a bailout in April, went ahead as planned.
Both sides said the talks would continue until the end of the month.
A financial rescue plan is not expected until Colombo agrees with its creditors on restructuring its $51 billion foreign debt, a process that could take months, according to both Sri Lankan and IMF officials.
The country defaulted on its debt in April and went cap-in-hand to the IMF which has asked Colombo to raise taxes and restructure loss-making state enterprises.
Most offices in Sri Lanka were shut on Monday and all schools were closed but hospitals and the main sea and air ports in the capital were still operating.
Hundreds of thousands of motorists waited in miles-long queues across the country for petrol and diesel despite the energy ministry announcing fresh stocks would not arrive for at least three days.

Wickremesinghe's office said he met with visiting Australian home affairs minister Clare O'Neil to "deepen cooperation and assist Sri Lanka as the country faces very difficult economic times".
Canberra announced $35 million in emergency assistance to meet the urgent food and healthcare needs of the impoverished island.
"Not only do we want to help the people of Sri Lanka in its time of need, there are also deeper consequences for the region if this crisis continues," Australian foreign minister Penny Wong said in a statement.
Australia is a member of the "Quad", a diplomatic grouping with India, Japan and the United States that has expressed concern over China's growing influence in the region.
Also read: What is QUAD, and how does it work?
China owns more than 10 percent of Sri Lanka's external debt and has invested heavily in infrastructure across the strategically located island, which is positioned along the main east-west international shipping lane.
The United Nations last week launched an emergency response effort to feed thousands of pregnant women facing food shortages in Sri Lanka.
Four out of five people in the country have started skipping meals as they cannot afford high food prices, the UN has said. It warned of a looming "dire humanitarian crisis" with millions in need of aid.
By Amal JAYASINGHE
© Agence France-Presse

Tweets by @forbesindia
Genrobotics: Scaling up while cleaning up
The curious case study of Zerodha's blue ocean strategy