Suppliers of cooking gas have been increasing the proportion of propane, looking to cut costs, which has led to over a thousand kitchens exploding across the country, killing at least seven people and injuring hundreds others 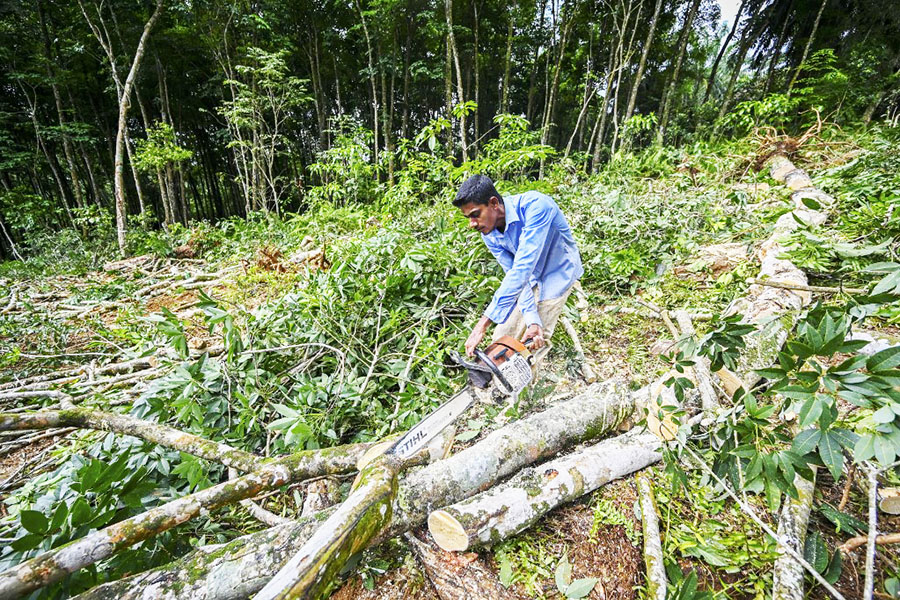 A lumberjack chops rubber trees felled in Nehinna village on June, 2022, to feed the rising demand for firewood as the cash-strapped island runs out of dollars to import gas for cooking stoves. Image: Ishara S. KODIKARA / AFP

Nehinna, Sri Lanka: As once relatively wealthy Sri Lanka suffers a dire economic crisis with shortages of everything from medicines to gas, people are returning to cooking with firewood.
The switch began at the beginning of the year when more than 1,000 kitchens exploded across the country, killing at least seven people and injuring hundreds more.
The reason was suppliers looking to cut costs and increasing the proportion of propane, which raised the pressure to dangerous levels.

But now, along with much else in the country of 22 million people, gas is either unavailable or too expensive for most.
Some tried to shift to kerosene oil cookers, but the government did not have dollars to import it along with petrol and diesel, which are also in short supply.
And those who bought electric cookers were in for a rude shock when the government imposed lengthy power blackouts as it ran out of dollars to import fuel for generators.
Niluka Hapuarachchi, 41, was miraculously unharmed when her gas range exploded soon after cooking Sunday lunch in August.
"Fortunately, no one was there at the time. There were pieces of glass all over the floor. The glass-top stove had exploded. I will never use gas for cooking. It is not safe. We are now on firewood," she said, despite moves to address the propane problem.
Also read: Cash-strapped Sri Lanka to sell 'golden' visas
Roadside eatery owner M.G. Karunawathi, 67, also switched to wood and said it was a choice between closing her business or putting up with smoke and soot.
"We suffer (smoke inhalation) when cooking with firewood, but we have no choice," Karunawathi told AFP. "It is also difficult to find firewood and it is also becoming very expensive."

Sri Lanka used to be a middle-income country, with GDP per head comparable to the Philippines and living standards the envy of neighbouring India.
But with economic mismanagement and the crucial tourism industry hammered by Covid-19, the nation has run out of dollars needed to pay for most imports.
Also read: Disaster tourism: Blackouts, shortages hit Sri Lanka recovery hopes
And the pain will likely continue for some time, with Prime Minister Ranil Wickremesinghe in parliament on Tuesday saying: "We will have to face difficulties in 2023 as well.
"This is the truth. This is the reality."
Unofficial inflation is now second only to Zimbabwe, and the United Nations estimates about 80 percent of people skip meals because they cannot afford food.
Before the crisis, almost all households in Colombo could afford to use gas, but now woodcutter Selliah Raja, 60, is doing a roaring trade.
"Earlier we had just one customer—a restaurant that had a wood-fired oven—but we now have so many, we can't meet the demand," Raja told AFP.
He says his timber suppliers in the provinces have doubled their prices because of the sharp rise in demand and skyrocketing transport costs.
"Earlier, land owners paid us to uproot rubber trees that are no longer productive," lumberjack Sampath Thushara told AFP in the tea-and-rubber-growing southern village of Nehinna.
Also read: Sri Lankans stand, sweat and seethe as economy grinds to a halt
"Today, we have to pay to get these trees."
Foraging for wood can also be dangerous in the snake- and insect-infested forests. Last week, a father of three died from wasp stings in central Sri Lanka and four others were hospitalised.
Demand is also surging for alternative energy, and entrepreneur Riyad Ismail, 51, has seen sales light up for the hi-tech firewood stove he invented in 2008.
He has attached a small battery-powered electric fan to blow air into the barrel-shaped stove to ensure better burning, thus reducing smoke and soot associated with traditional firewood burners.
His upmarket "Ezstove" and the mass-market "Janalipa", which uses coconut charcoal, promises a minimum 60 percent savings compared with cooking with gas.
Both his stoves—which cost around $20 and $50, respectively—have become big sellers with buyers having to go on a waiting list.
It has been so successful, Ismail says, there are several copies on the market.
"You will see many renditions of my design... other people are piggybacking (on the design)," Ismail said while making chicken satay.
By Amal JAYASINGHE
© Agence France-Presse