Those who don their virtual reality goggles or use other means to venture into the metaverse will find a ministry open for business with companies and even ready to sign bilateral agreements with foreign governments, officials said 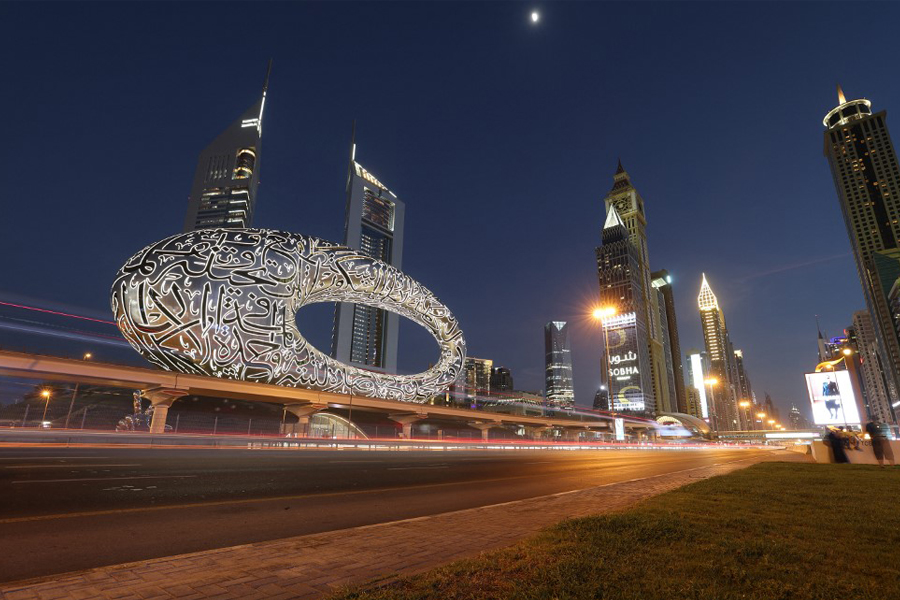 A file photo taken on July 8, 2022 shows a view of the Museum of the Future in the Gulf emirate of Dubai. The UAE has unveiled its first ministry in the Metaverse and a virtual trip to Mars as Dubai attempts to become a hub for the immersive world, which remains in its infancy but is attracting growing interest. Image: GIUSEPPE CACACE / AFP

The United Arab Emirates, which already boasts the world's tallest skyscraper and has launched a bold Mars mission, now hopes to become a pioneer in the depths of the metaverse.
In a project launched at Dubai's gleaming Museum of the Future, it announced that the UAE's economy ministry was setting up shop inside the immersive virtual world that is now taking shape.
Those who don their virtual reality goggles or use other means to venture within will find a ministry open for business with companies and even ready to sign bilateral agreements with foreign governments, officials said.
The metaverse is an online world where users will eventually be able to game, work and study, its proponents say—although it is still in a "test" phase, the UAE's economy minister conceded.

Abdulla bin Touq Al Marri was speaking at the inaugural Dubai Metaverse Assembly, held at the museum whose innovative ring shape decorated with Arabic calligraphy flanks the city's main thoroughfare.
Representatives of tech giants mingled with entrepreneurs and developers exploring the potential of the metaverse, a network of digital spaces intended as an extension of the physical world.
"In the last couple of years we've seen investments, we've seen companies move in, and with the changes of the (visa) regime... we see talent coming in," Al Marri told AFP in an interview.
"We trained our employees to really immerse themselves in the metaverse, use the metaverse and engage with the Generation Z that is going to come," he added.
The UAE, which has a history of bold projects including the 830-metre (2,723-foot) Burj Khalifa, hopes the metaverse can add $4 billion to annual GDP and 40,000 jobs to its workforce by 2030.
In its bid to become one of the world's top-10 metaverse economies, Dubai wants to attract 1,000 companies specialising in blockchain and related technologies, helped by eased visa rules for freelancers, entrepreneurs and creatives.
Also read: The metaverse and legal frameworks around it
As the coronavirus pandemic pushed more people into the online world, "Covid really accelerated" the trend, Al Marri added.
"We thought the metaverse is a phase technology" that might take 10 to 20 years to emerge," he said. "Covid-19 really immersed us so fast and expedited the use of the metaverse."

Unlike the UAE's oil-rich capital, Abu Dhabi, crude represents just five percent of Dubai's economy which has pivoted towards business, tourism, real estate and new technologies.
The UAE has already introduced a law governing virtual assets and a regulatory body for cryptocurrencies, while welcoming major crypto exchange platforms.
One of the UAE's early private-sector metaverse projects is called 2117, named after the dream of Dubai's ruler Sheikh Mohammed bin Rashid to colonise Mars a century from now.
Metaverse users can now buy tickets to join a virtual shuttle carrying settlers to the red planet.
"A lot of us won't live long enough to see this mission with our own eyes," said Amin Al Zarouni, founder of the Bedu start-up behind the virtual Mars trip.
"We'll try to replicate this experience in the metaverse."
Until now, use of the metaverse is niche and even its architects say widespread adoption is years away. How it will develop is unknown.
Also read: The metaverse and legal frameworks around it
According to Meta, which owns Facebook and other social media titans, Analysis Group research has shown that the metaverse could add $360 billion to GDP in the Middle East, North Africa and Turkey in 10 years, if it follows the growth pattern of mobile technology.
"We also know that when policy supports innovation, it accelerates the adoption of new technologies," the company said, when asked about Dubai's prospects of becoming a metaverse hub.
"If we look at the context of Dubai, there's already a clear strategy and goals to accelerate metaverse adoption and investments in the building blocks of the metaverse."
By Sahar AL ATTAR
© Agence France-Presse

Tweets by @forbesindia
From mere Rs 4,500 to Rs 1,300 crore: How Bipin Hadvani built Gopal Snacks
Breast cancer vaccine or mRNA vaccine: Who will win the Nobel Prize for Medicine?