The US men's and women's national soccer teams will receive equal pay under new contracts that feature an unprecedented split of World Cup prize money, the US Soccer Federation announced Wednesday 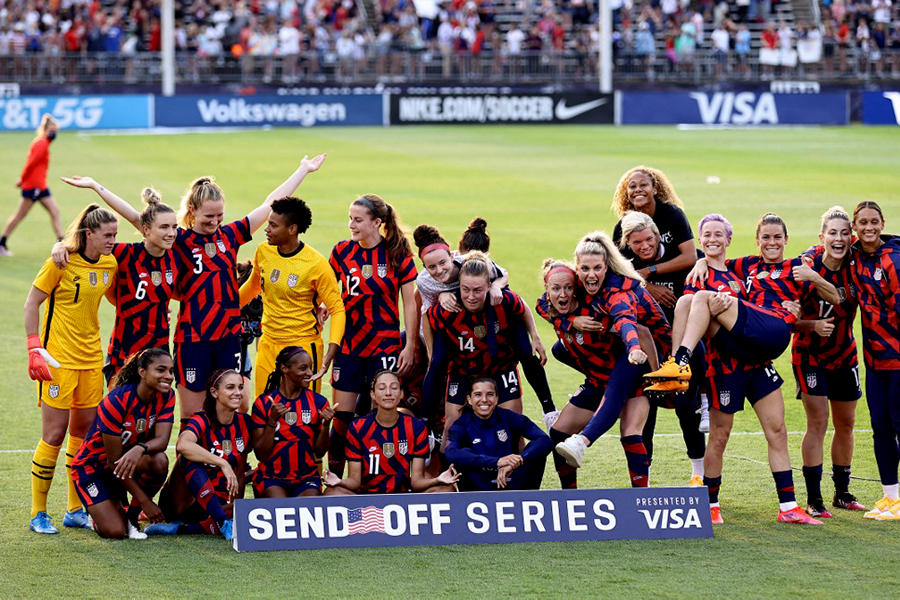 Washington, United States: The US men's and women's national soccer teams will receive equal pay under new contracts that feature an unprecedented split of World Cup prize money, the US Soccer Federation announced Wednesday.
"This is a truly historic moment," US Soccer president Cindy Parlow Cone said. "These agreements have changed the game forever here in the United States and have the potential to change the game around the world."
The landmark collective bargaining agreements (CBAs) reached between the federation and its senior national teams will see US Soccer distribute millions of dollars more to its top players through increased match pay and sharing of revenues from ticket sales as well as sponsorship and broadcast deals.
But the revolutionary feature is the stipulation that players from both teams pool and share the otherwise unequal prize money paid by global governing body FIFA for participation in their respective World Cups.

Equalizing World Cup pay had been a major stumbling block given the huge discrepancy in FIFA's payouts for the men's and women's events.
FIFA awarded France $38 million for winning the 2018 men's World Cup but only $4 million to the United States for their 2019 Women's World Cup triumph.
The US men meanwhile received $9 million in prize money at the last World Cup they played in, in 2014, just for reaching the last 16.
The men's team in 2018—last placed in the World Cup in Russia—also received double the prize money of the women's team in 2019 when they were champions.
FIFA has announced that the total bonus pool for this year's men's World Cup in Qatar will be $400 million, while the bonuses for the women's tournament in Australia in 2023 will be $60 million.
In reconciling that discrepancy with the new agreements, US Soccer is living up to it's "One Nation, One Team" tagline, said US forward Midge Purce, who was a member of the bargaining committee for the women's players' association.
"I think we set a new standard of value for women in the workforce," Purce said. "I don't know when or how or where this will unfold, and what it will trigger next, exactly, but I do think it will inspire a lot and push a lot of individuals and groups to push further on this."
For non-World Cup tournaments, such as those organized by regional governing body CONCACAF, US players from "both teams will earn an equal amount of the total prize money paid when both teams participate in the same competition."
Players on both teams will also receive equal pay—up to $18,000 for a win—for international matches organized by US Soccer.
"The accomplishments in this CBA are a testament to the incredible efforts of WNT players on and off the field," said US women's captain Becky Sauerbrunn, president of the women's union.
However, Cone acknowledged that "no matter how you look at it, the men are giving up money to make this equal, and so I think the men's team and the men's players' association should be applauded."
"This is a big deal," tweeted President Joe Biden of the agreement on Thursday night.
"I'm proud of you for never giving up and I commend @ussoccer (US Soccer Federation) for agreeing to do the right thing," he added.
Center-back Walker Zimmerman, a member of the men's players' association bargaining committee, admitted the negotiations involved some "tough conversations" but said that ultimately the men were proud to "come alongside" the women's team.

"They said equal pay for men and women was not possible, but that did not stop us and we went ahead and achieved it," Zimmerman said.
In February, the US national women's team won a $24 million payout and a promise of equal pay in a major settlement with US Soccer, that was contingent on a new collective bargaining agreement.
The question of World Cup prize money had formed a prominent part of the lawsuit, which was filed in 2019 and accused the federation of "stubbornly refusing" to pay its men and women's players equally.
Women's star Megan Rapinoe, who has forged a reputation as an unflinching advocate for several causes including equal pay and conditions for her and teammates, said in February that the settlement marked a moment in which "US Soccer changed for the better."
The United States women have won four Women's World Cup titles and four Olympic gold medals. They are chasing an unprecedented third consecutive Women's World Cup crown after hoisting trophies in 2015 at Canada and 2019 in France.
By Becca MILFELD
© Agence France-Presse

Tweets by @forbesindia
Order, chaos, and emotional intelligence: How Fractal turned unicorn after 22 years
Snowmobiles in slush? Sports on thin ice in the warming Arctic