10 football pitches of pristine rainforest lost per minute in 2021

Researchers calculated that the loss of tropical primary forest in 2021 resulted in the release of 2.5 gigatonnes of carbon dioxide into the atmosphere, equivalent to the annual fossil fuel emissions of India 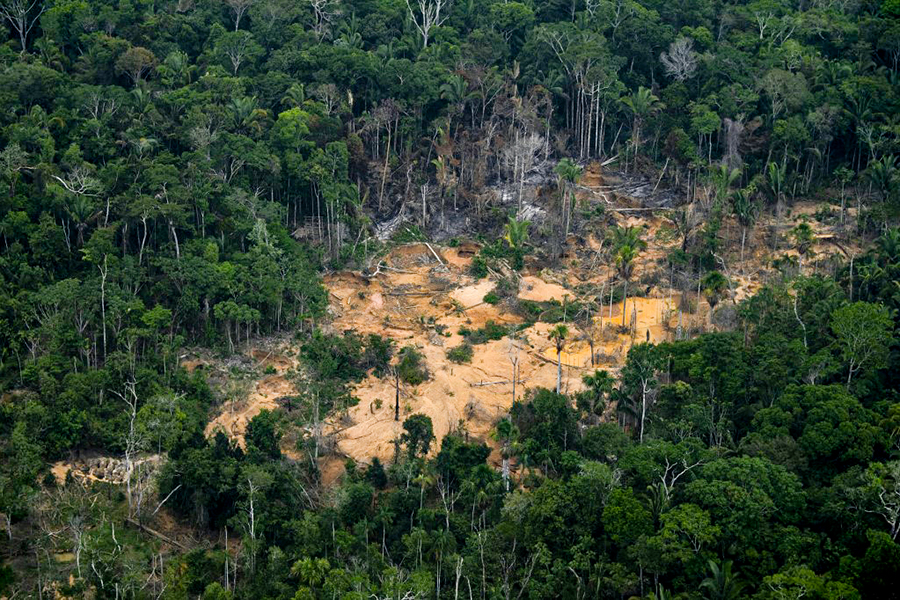 An aerial view of a deforested area of the Amazonia rainforest in Porto Velho, Rondonia state, Brazil, on September 15, 2021. The Amazon basin has, until recently, absorbed large amounts of humankind's ballooning carbon emissions, helping stave off the nightmare of unchecked climate change. Image: Mauro Pimentel/AFP

Paris, France: Huge swathes of tropical rainforest were burned or hacked down for cattle and crops last year, led by destruction in Brazil, researchers said Thursday, warning that climate change itself is making it harder to reverse the losses.
Some 11.1 million hectares (27.5 million acres) of tree cover was lost across the tropics in 2021, with 3.75 million hectares of that in old-growth primary forests, according to annual research by Global Forest Watch, the World Resources Institute and the University of Maryland.
"That's 10 football pitches per minute. And that goes on for a year," said Rod Taylor, who leads WRI's Forests Program.

Researchers calculated that the loss of tropical primary forest in 2021 resulted in the release of 2.5 gigatonnes of carbon dioxide into the atmosphere, equivalent to the annual fossil fuel emissions of India.
Over 40 percent of the total tropical primary forest lost in 2021 was in Brazil, where some 1.5 million hectares was cut down or went up in smoke.
That was followed by the Democratic Republic of the Congo, which saw nearly 500,000 hectares disappear, while Bolivia's forest destruction reached its highest level since records began in 2001 at nearly 300,000 hectares.
While the latest report showed a slight overall reduction in the rate of primary tropical forest loss in 2021, down 11 percent on a year earlier, researchers said rates remain unsustainably high.
Beyond the tropics, the report showed that boreal forests in the northern hemisphere suffered the greatest tree cover loss in two decades.
An unprecedented fire season saw Russia alone lose 6.5 million hectares of forest cover in 2021, the highest on record.
Researchers warned of a potential "feedback loop" where more blazes cause greater carbon dioxide emissions, which in turn helps drive temperatures higher and increases the fire risk.

This year's data comes after 141 global leaders committed at the COP climate summit in Glasgow last year to "halt and reverse forest loss by 2030".
Since most of the 2021 forest loss had already happened before the agreement, WRI said the latest figures could be seen as a "baseline" for assessing its effectiveness.
But the researchers added that there would have to be a consistent and significant fall in the rate of primary forest loss every year for the rest of the decade to meet those goals.
"Climate change itself is making it harder to maintain the forest that we still have," said WRI's Frances Seymour, adding that this showed the imperative of cutting greenhouse gas pollution.
Recent research has suggested that the Amazon rainforest could be closer than previously thought to a "tipping point" that would see it irretrievably transition into savannah and potentially releasing vast quantities of CO2 into the atmosphere.

Brazil, which holds about one-third of the world's remaining primary tropical rainforest, has seen the destruction of its forests accelerate in recent years.
Non-fire losses, which WRI said are often linked to land clearance for agriculture, rose nine percent last year compared to 2020.
Meanwhile in the western Brazilian Amazon, the report said key states saw more than 25 percent increases in non-fire loss from 2020 to 2021.
"We already knew that such losses are a disaster for the climate. They're a disaster for biodiversity. They're a disaster for indigenous peoples and local communities," said Seymour, highlighted recent research showing forests help cool the air as well as storing carbon.
By contrast, in Indonesia government policy and private sector actions helped reduce primary forest loss 25 percent last year from 2020—a fifth straight year of slowing destruction, albeit from very high levels.
WRI warned however that the end of a temporary freeze on new oil palm plantations combined with a 40-year high in oil palm prices may threaten the country's recent successes.
"It's clear that we are not doing enough to provide incentives to those in a position to stop forest loss, to protect the world's remaining tropical forest expanses," said Seymour.
by Kelly Macnamara