India, which imports much of its military hardware from Russia, has long walked a diplomatic tightrope between the West and Moscow—notably refusing to denounce the latter or vote against it at the United Nations over its actions in Ukraine 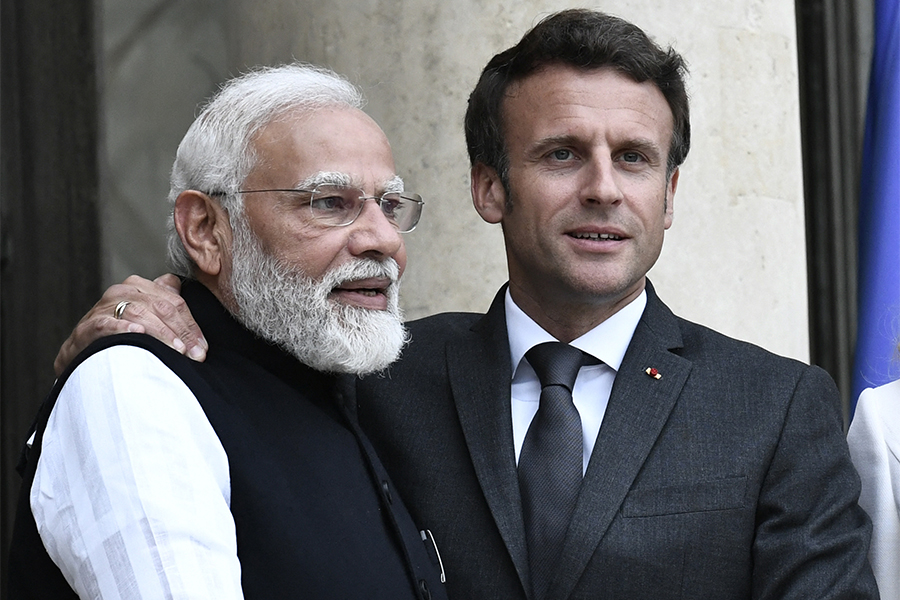 Paris, France: India and France on Wednesday called for "an immediate cessation of hostilities" in Ukraine, with Prime Minister Narendra Modi again stopping short of condemning Russia's invasion of its neighbour.
India, which imports much of its military hardware from Russia, has long walked a diplomatic tightrope between the West and Moscow—notably refusing to denounce the latter or vote against it at the United Nations over its actions in Ukraine.
"France and India expressed their deep concern over the humanitarian crisis and the ongoing conflict in Ukraine," Modi and French President Emmanuel Macron said in a joint statement after they met in Paris for talks and a working dinner.

"Both countries unequivocally condemned the fact that civilians have been killed in Ukraine, and called for an immediate cessation of hostilities in order for the two sides to come together to promote dialogue and diplomacy, and to put an immediate end to the suffering of the people."
However, only France condemned "Russian forces' illegal and unjustified aggression against Ukraine".
The two countries said they would "respond in a coordinated and multilateral way" to the risk the conflict would intensify a global food crisis, with Ukraine one of the world's main wheat producers.
Ahead of the meeting, Macron's office had said he would "emphasise the consequences of the war for the international order well beyond the European Union, including in Asia" to Modi.
France wants to "help the Indians diversify their supply" away from Russian arms and energy, officials added.
The aim, they said, "is not to leave the Indians with no way out, but to offer solutions".
Modi, who is on a European tour, told reporters after meeting with German Chancellor Olaf Scholz in Berlin on Monday that "there won't be any winners in this war and everyone will lose".

The Elysee said Macron has an "extremely warm relationship" with Modi, who has visited France three times since 2017, while the French leader went to India in 2018.
Modi invited Macron to visit India again to deepen cooperation on defence technology and the transition to clean energy.
The two men embraced and posed for photographs when Modi arrived in the courtyard of the Elysee Palace, where he was also greeted by Macron's wife Brigitte.
Going into the meeting, officials described France's relationship with India as "trusting", and the joint statement reaffirmed the two countries' desire to strengthen the "strategic Franco-Indian parnership, particularly in the Indo-Pacific".
Securing France's place in the region is especially important after Britain, the United States and Australia last year sealed their AUKUS security pact—dumping a lucrative French contract to supply Canberra's next generation of submarines along the way.
India has bought dozens of French Rafale fighter jets and six submarines, and cooperates with Paris on civil nuclear projects.
French state-owned energy giant EDF wants to build six next-generation EPR reactors in Jaitapur on India's west coast.
The Elysee said it was pushing hard to get that deal signed, fitting in with Macron's vow ahead of his re-election last month to renew France's nuclear industry and replace its fleet of ageing power plants.
© Agence France-Presse