Google's First Lady Is Saving The Planet From Ourselves

Well-connected, and with access to husband Eric Schmidt’s fortune, Wendy Schmidt has embarked on a mission to save the planet from ourselves 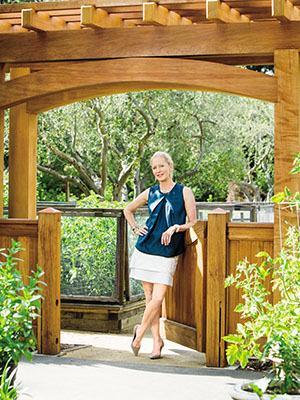 Wendy Schmidt is getting down and dirty. The svelte blonde with sparkling blue eyes is giving me a tour of the organic garden at her home in Atherton, California. She passes a compost pile, then suddenly reaches down to grab a handful of rich, dark earth, letting it fall back to the ground through her fingers. She gives the compost credit for the hundreds of white roses in full bloom along the driveway and throughout the garden. “It’s really wonderful,” she says.

This seems to be her place of repose. After all, it’s tough to keep up with Schmidt, full-time philanthropist and wife of billionaire Google Chairman, Eric Schmidt. She’s just back from Las Vegas, where she played tennis with Andre Agassi. An avid sailor, she’s nearly completed the purchase of a historic schooner in San Francisco, which, she says, she plans to use as a floating office one day a week. She sits on 10 boards, including the Natural Resources Defense Council and the America’s Cup Organizing Committee, and, in the past year, she’s flitted all around the country to attend meetings.

But to Schmidt, there’s a method—and a reason—for the madness. All of what she does, she says, funnels into her true passion: Saving the Earth. Schmidt runs two foundations: The Schmidt Ocean Institute, which has funded the construction of Falkor, a sophisticated ocean research vessel used by various academic researchers, and the Schmidt Family Foundation and its 11th Hour Project grantmaking arm.

The latter funds some 150 groups that work in five general areas: Climate and energy, ecological agriculture, human rights, environmentally conscious sailing and the vitality of the island of Nantucket, Massachusetts, where she spends up to four months a year. Of her conservation work, she says without a trace of self-consciousness: “Everything I do personally feeds into it—the boards I sit on, the kind of intellectual life that I get to be part of,” she says. She puts the money where her mouth is: Since 2006, she has spent $225 million on philanthropic efforts, making her a powerhouse on the environmental philanthropy scene.

Some of her money has gone to back the projects of the various movers and shakers who are part of her social and intellectual circle. In 2010 Schmidt ponied up $1 million to launch and chair the board of green architect and designer Bill McDonough’s non-profit Cradle to Cradle Products Innovation Institute, which provides guidelines to manufacturers about making products that are free of harmful products. Last year she helped out her buddy, Eve Ensler (the playwright known for The Vagina Monologues), who runs the V-Day non-profit, which supports City of Joy. The programme focuses on the victims of sexual abuse in the Democratic Republic of Congo, teaching them skills that will help restore some normality to their lives. Schmidt decided to pitch in on the sustainability side, donating $400,000 to buy an 865-acre farm nearby where some City of Joy graduates are working to grow vegetables and raise tilapia and pigs.

And after getting to know author and UC Berkeley journalism school professor Michael Pollan, Schmidt—a graduate of the journalism school—decided to help him out, too. With a $100,000 grant, she became the lead funder of UC Berkeley’s Food Institute, which will launch this fall. “Wendy recognises that food and agriculture were key drivers of the environmental crisis and hold potential to be drivers of the solution,” says Pollan.

Schmidt grew up in Short Hills, New Jersey, where her parents ran an interior design firm. She graduated from Smith College, and later headed to UC Berkeley for graduate school. On her third day there, she met Eric, who was then a doctoral student in computer science. They were married in 1980 and have two adult daughters. Her environmental philanthropy blossomed about a year after Google’s August 2004 public offering. The catalyst, she says, was Al Gore. She heard from a friend about a slide show that the former vice president had given at Berkeley in late 2005. She invited him to present his “Inconvenient Truth” talk (before it became the movie) at Stanford University. With her husband, she invited 350 of Silicon Valley’s “smartest people” to the event, and seated an environmental expert at each table at a dinner afterwards. “Our thought was that we needed to galvanise the creative energy of the Valley around this problem,” she says. “We’ve solved so many other problems, right? Are we going to fix this one, too?” That event led to the creation of the Schmidt Family Foundation and the 11th Hour Project. The reason for the latter’s name? “We’re at the 11th hour now,” she says. “We need to change what we’re doing.”

The foundation work is pretty much Wendy’s show, but she gets the financial—and moral—support from her husband, though the two lead busy, at times independent, lives. “Wendy believes that we can combine environmental stewardship with good business judgment and real economic growth,” says Eric. “She’s exactly right, and what she’s doing will change the world.”

McDonough, one of her grantees, sees her work in maritime terms. “I think of Wendy as a high-level skipper,” he says. “Wind in her hair, looking straight ahead, trying to figure it out, honoring the technology and the natural world.”