Poetry is the most democratic of the arts, says Vijay Seshadri

Pulitzer-winning poet Vijay Seshadri talks about his craft, what inspires him, and how poetry can perhaps not be taught 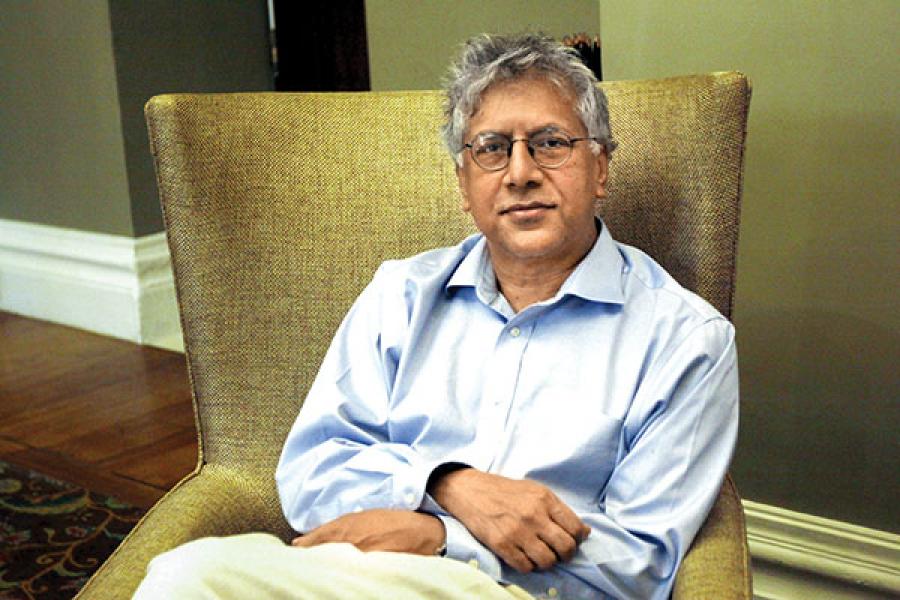 One piece of information about the Pulitzer Prize-winning poet Vijay Seshadri appears in all biographical notes, interviews, introduction to his works on literary websites: He was born in Bangalore, India, and moved to the US at the age of five. You might imagine, for someone who grew up on mainly American literature, whose work is shot through with what might be called a quintessentially American narrative voice, and whose books (until recently) were not easily available here, that his birth and ancestry are his only tenuous link to India. But those familiar with his body of work will find signs of a deeper, lingering engagement with the subcontinent.

Take the following lines from the title poem in The Long Meadow:
The god waits there for him. The god invites him to enter.
But looking through the glowing portal, he sees on that happy plain not those he thinks wait eagerly for him— his beloved, his brothers, his companions in war and exile, all long since dead and gone— but, sitting pretty and enjoying the gorgeous sunset, his cousin and bitter enemy, the cause of that war...

Indian readers will instantly grasp that ‘he’—the son of righteousness—is a reference to Yudhisthir, although his name is not mentioned in the text. They will know, too, that the poem is reaching into the grey shadows around ‘righteousness’, which makes the Mahabharata, one of our greatest epics, so continually relevant. Ask Seshadri about his familiarity with Indian literature and myths, and he tells you an anecdote that’s almost burnt into his memory. “When I was about two years old, I got burnt on some coals. This was in Bangalore,” he says. “Later, I was in bed to recover and the Ramayana was recited to me. I still remember that.”

Seshadri, born to Tamil- and Kannada-speaking parents, did not study Indian literature or the epics, but as a teenager in the US, he did engage with mythology and some of the ancient scriptures, as he had opted for Religion as one of his classes in school. That was when he first, he recalls, read the story of Yudhisthir and his journey to heaven. “What reading Indian mythology gave me was a taste for the imaginative and the fantastic. Indian stories are so imaginative, so wild. Like the stories from the Bhagavata Purana. I’ve always had an attraction for the imaginative, even among writers.”

And what about his love for poetry, where did that come from? “There is no such thing as poetry out there,” he counters. “You fall in love with a poem. So I fell in love with certain poems. As the number of those poems kept growing, my interest in the art grew.”

In the early years, though, Seshadri thought he wanted to write fiction. He made an unsuccessful attempt at writing his first novel, and, he says, out of the failure of that came his early poetry. As his appreciation of poetry grew, he also found encouragement from his professors for his own poems. However, his vocation did lie in the realm of storytelling. There is a definite narrative running through each poem and much of it is, mercifully, quite accessible. Ask for his opinion on the more abstract works poets have produced in recent decades, and he answers cautiously. “I think there is something like a ‘difficult poem’. I understand that kind of highly intellectual poem, I enjoy it, but I don’t write it.” 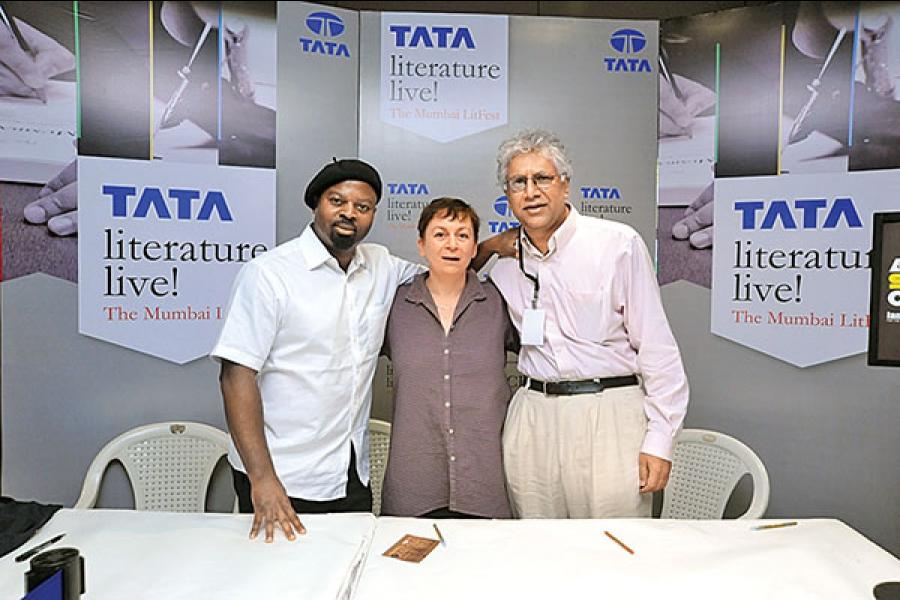 (Left to right) Authors Ben Okri and Anne Enright with poet Vijay Seshadri at the recently concluded Tata Literature Live! festival in Mumbai
What he does write is richly watered by a number of streams: Mathematics, science, ancient fables, politics, the urban experience. For instance, in the delightful poem, Imaginary Number, he draws a metaphor out of the “square root of minus 1” in the context of the soul. A regular subscriber to the Science Digest, he says he is highly inspired by fact and news from the scientific world. This is not surprising, given that he started out studying mathematics in college before switching to philosophy “of the very rigorous Anglo-American tradition, very distinct from continental philosophy”. Eventually, he did his Master’s in Fine Arts degree from Columbia University, then attended a doctoral programme for Middle Eastern studies, which took him to Pakistan to study Urdu. “I was supposed to stay for a year,” he says, “but stayed only four months. By then, I knew that I did not want to be a scholar. I wanted to be a poet.”

Along the way—before the Master’s degree, but after his awareness that he wanted to be a writer—he lived a non-academic life. “I lived on the West Coast [in the US] between the ages of 20 and 28. Through that period, my ambition to be a writer became more serious. For a while I worked in the fishing industry,” Seshadri says. The evidence of those years spent among fishermen is presented powerfully in his work in 3 Sections, the collection that won him the Pulitzer Prize for poetry earlier this year.

The Pulitzer, while being the one that has brought the most recognition—along with opportunities to come to India that he otherwise wouldn’t have had, he says—is only one among several prestigious awards for Seshadri. He won the James Laughlin Award for his first collection The Long Meadow, The Paris Review’s Bernard F Conners Long Poem Prize and the MacDowell Colony’s Fellowship for Distinguished Poetic Achievement, a Guggenheim Fellowship, and grants from the New York Foundation for the Arts and the National Endowment for the Arts.

It is a body of work, nonetheless, that is difficult to ignore. It not only pulls together diverse strands of human experience, but also struggles with—and against—some of the troubling aspects of contemporary society. His poems are laced with references to torture, secret police, ‘black ops’ as revealed through Hollywood scripts, Dr Dre, egosurfing, nursing homes, and the ways in which geopolitics intersect with salmon fishing. As might be evident in the lines (below) from his long prose poem, Pacific Fishes of Canada, Seshadri writes not only of the political attitudes of commercial fishermen during the Cold War, but also damage to fish habitats, and the carving up of oceans into ‘territories’:
From the notional, undulating line twelve miles from the shoreline that
was the limit of American territory to another line two hundred miles from
the shoreline, Pacific fish once available for slaughter by every country in
the world belonged exclusively to America now, to take for herself or to dole
out under quotas to others...

With such unselfconscious political work, one may imagine that the poet is a keen follower of the news. But Seshadri says that his political reading is limited to certain phases. “I know what is happening in the world, of course, and I’m properly horrified. But I don’t set out to read politically. I think a poet can only approach the collective life with a certain amount of indignation.”

Yet, it is also true that poets and poems engage most crucially with the political lives of people and that of a nation. It is, as Seshadri puts it, the democractic art. “Everyone can write poems. Everyone has poetic feelings. It’s a romantic notion, isn’t it? And what is romantic is also revolutionary.”

Whether or not this holds true for other nations, this idea, he believes, is deeply implicated in the American notion of democracy. He refers to Walt Whitman’s preface to the classic Leaves of Grass, where he says that poetry is inextricable from America and that America is inextricable from democracy. “He seems to be saying that all Americans are poets because all Americans are free, and that to be a free human being is one and the same as being a poet,” says Seshadri. “Apart from the accuracy or inaccuracy of his political analysis, I think the social mysticism is pretty clear. Poetry is the most democratic of the arts because its means of expression is something we all possess: Language.”

There is the question, of course, about what role the practice of poetry might play in an increasingly anti-poetic culture. But Seshadri does not hold the view that the cultural climate is hostile to poets. On the contrary, he says, poetry is flourishing and the work being produced is of an admirable degree of sophistication and depth. “There are lots of festivals; grants are made for poets. Many people write and many people read. People like Billy Collins have made substantial careers in poetry. A city like New York has hundreds of readings. There is a healthy poetic sub-culture.”

However, he doesn’t deny that the overall culture might be more inimical to literature. “The effect of television and personal computing and the internet has been vast. Only the most blithe would say it has not had an effect on reading. When I was a kid in the 1960s, there was nothing you could do except read to escape the environment you found yourself in,” he says. And yet, he points out that literature survives somehow.

He himself reads “all the time” and counts reading as one of his main sources of inspiration. “Other people’s writing always gets me going,” he says. These days, he has been returning to the work of Mark Strand—“a poet I grew up on; it’s wonderful to come back to him”—and Weldon Kees—“threw himself off the Golden Gate bridge... the density of his work, I want that”.

Given that he has spent decades teaching at the Sarah Lawrence College, one cannot resist asking: Can writing be ‘taught’? He demurs. “The college hired me because I was an editor with The New Yorker. I think the writing of prose can be taught, through the teaching of editing. But poetry... I don’t know. The central gift of poetry is the making of metaphor. Even Aristotle says in his Poetics that you can’t teach this. But you can teach prose and help produce good prose writers.”

Speaking of prose, his next book is a memoir. He is also putting together another book of poems, but won’t mention the titles for either. “I’m superstitious about things like that,” he laughs.

One can only hope that his memoir will offer the same deliciously radioactive tone that his poem Memoir promises in these lines:
Orwell says somewhere that no one ever writes the real story of their life.
The real story of a life is the story of its humiliations.
If I wrote that story now—
radioactive to the end of time—
people, I swear, your eyes would fall out, you couldn’t peel
the gloves fast enough...”