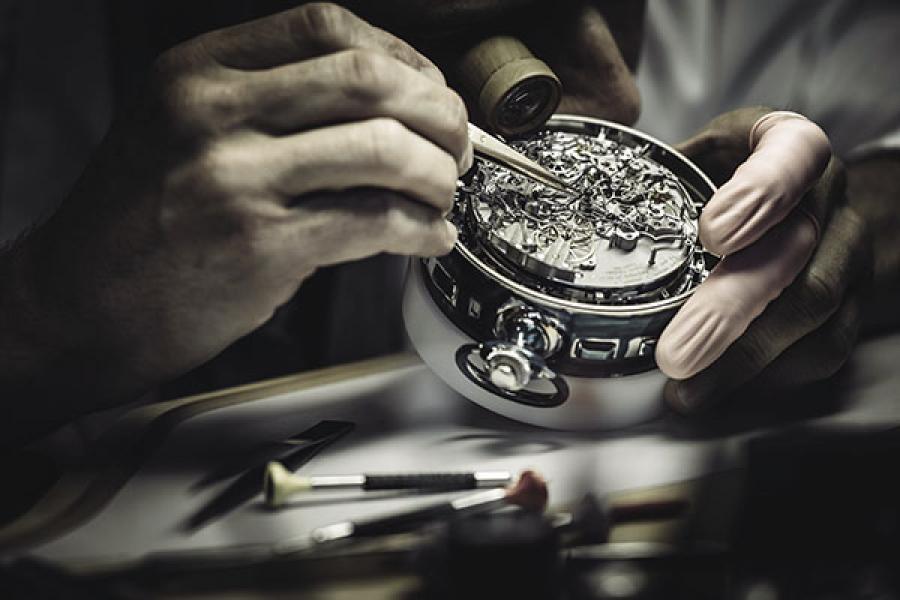 A handful of times over the past century a watch brand has been able to claim rights to building the most complicated ­timepiece in the world. In September Vacheron Constantin unveiled the Reference 57260 pocket watch, which took a team of three master watchmakers (as well as hand and dial specialists) eight years to build.

Estimated at $8 million, the Reference 57260 (named for its 57 complications and Vacheron Constantin’s 260th anniversary) was commissioned by a collector in the Americas who wishes to remain anonymous. He challenged Vacheron Constantin’s Atelier Cabinotiers division to create the world’s most complicated watch, with some specific functions, including a Hebraic perpetual calendar and an unusual split-seconds chronograph (to time multiple events at once). Such technically advanced feats have never been incorporated into a watch before.

Approximately 2 inches in diameter and crafted in an 18-karat white gold case that weighs about 2 pounds, the Vacheron watch nearly doubles the previous record for most complications in a timepiece: 33. Inside the gleaming hull reside more than 2,800 tiny mechanical components that make up the all-new movement (which took nearly two of the eight years spent to assemble). All told, the timepiece claimed 10 new patents.

And while the Reference 57260 is undeniably an incredible feat of precision, technology and craftsmanship, its creation prompts the question: “Why would anyone want to wait eight years for a watch to be built?” 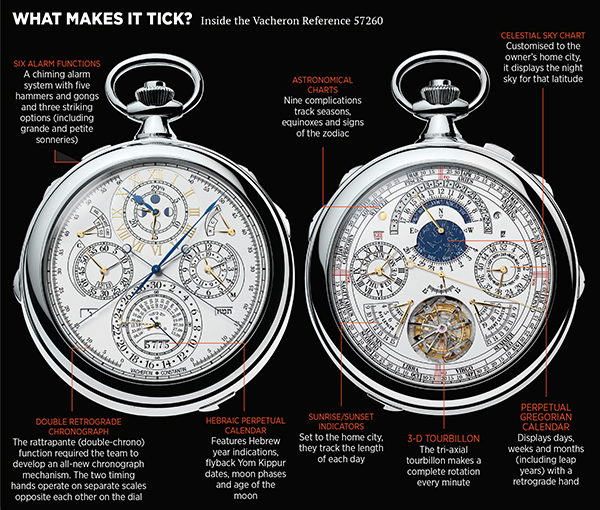 The answer has roots dating back to the 1920s and 1930s, when two of the richest and most competitive men in the world, automotive mogul James Ward Packard and banker Henry Graves, commissioned top watch brands to create the most complicated watch in the world. Those timepieces (created by Vacheron Constantin and Patek Philippe, respectively) took years to build and resulted in what have become record-breaking works of art. (In November 2014 the Henry Graves Supercomplication pocket watch, which Patek Philippe made in 1932, sold at Soth­e­by’s Geneva for a record $24 million.)

“This challenge links back to those great collectors who are credited with pushing brands to create the unimaginable and produce some of the greatest watches in the world,” says Juan Carlos Torres, CEO of Vacheron Constantin. “And the fact that it is an American who commissioned this watch is fascinating.”

As was the pressure to build the world’s most complicated timepiece. “Because the most complicated watch before this one had 33 complications, we set a goal of 36 complications,” says Dominique Bernaz, head of the Atelier Cabinotiers division. “As we worked together, I would regularly ask my team if they thought we could do it, and they would smile and nod yes. We were halfway through the project before we knew just how many complications the watch would have, because the project kept evolving.”

“Each complication is a special accomplishment,” adds Bernaz, “but putting them all together into one watch, that was the real challenge.”

So will this watch spark a new rivalry in watchmaking among 21st-century collectors? Time will tell.