India has the highest number of Trump-branded properties outside of the US, but while early sales figures clocked good numbers, riddled with a slowdown, developers are offering a variety of incentives to now boost numbers 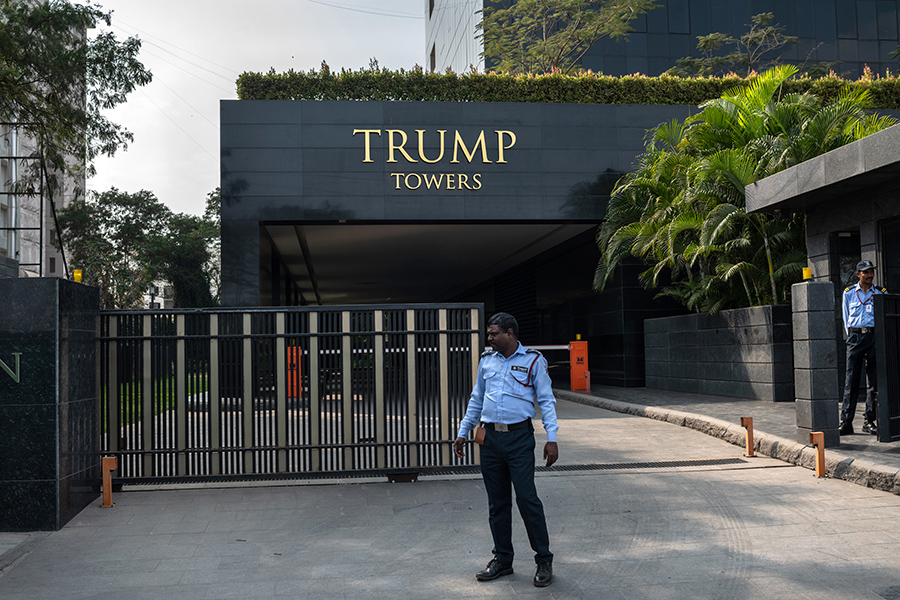 A security guard outside stands outside the Trump-branded 23-story complex in Pune, India, Feb. 11, 2020. India has the largest number of Trump Towers outside North America, but sales are cool in an ailing market for luxury real estate. (Rebecca Conway/The New York Times)

PUNE, India — The apartment buildings rise 23 stories into the skyline, a pair of elegant, jet-black towers buffered from the street by security guards and high fences. The name Trump is displayed in big, gold block letters.

But within the Trump Towers complex in Pune, in western India, employees say that most of the $2 million apartments are vacant. The pool is frequently empty, sales have slowed and buyers rarely visit.

The Trump brand once seemed promising to Indian developers. But it, too, is struggling to surmount one of the country’s worst economic slumps in years.

“In the past, the Trump name may have helped attract investors, but gone are those days,” said Pankaj Kapoor, the managing director of Liases Foras, an Indian real estate research company.

As Donald J. Trump prepared to run for president, Indian real estate magnates made a bet that licensing his name would sell apartments. Now India has more Trump-branded projects than any country except the United States — six residential towers in four locations, including Pune, a quiet industrial city of more than 3 million people.

But when Trump touches down in India on Monday to meet Prime Minister Narendra Modi, his first official visit as president, he will enter a country caught in a grave slowdown. As the Indian economy faces its lowest growth rate in more than a decade, developers have abandoned residential projects and slashed prices to attract buyers.

It is not just the Trump brand that is suffering from weak demand. Thousands of apartments are vacant nationwide or trapped in construction delays and prices have stagnated. Debt-strapped builders cannot secure loans.

Real estate agents and developers sold about 40% less square footage last year than in 2014, according to Prashant Thakur, the head of research at Anarock Property Consultants, a real estate research firm.

At Trump Towers Pune, which were completed a few years ago as the first project in India to bear the Trump name, only seven of 46 units are occupied, according to building employees and others with knowledge of occupancy and sales.

The real estate market is now so weak, the Trump family’s partners in Pune decided to not even attempt — at least for now — to sell half of the luxury apartments in the complex, which retail for about 35% more than comparable properties.

Pune, Mumbai, Kolkata and Gurugram, a tech hub near New Delhi, all have Trump-branded projects. The deals in India were negotiated before Trump was elected, and the Trump family said they were contractually obligated to see them through. But the decision to push ahead has generated conflict-of-interest questions about the mixing of presidential duties with family business.

Panchshil Realty, which built the towers in Pune, did not answer emailed questions. Through a spokesman, the company’s chairman, Atul Chordia, declined to comment.

Asked to comment on its projects in India, the Trump organization and one of its India-based partners did not dispute that their real estate projects in India, particularly in Pune and Mumbai, have faced challenges because of the downturn in the luxury real-estate market.

But they argued that while they are suffering too, their sales are still better than others in the market.

“Despite the slowdown in India, Trump is still the most sought after luxury residential brand in the country,” Kalpesh Mehta, the developer of unfinished projects in Kolkata and Gurugram, said in a statement.

In most cases, the Trump Organization does not invest in such towers, but instead licenses its name in exchange for royalties, fees that are mostly paid as the individual units are sold.

According to its most recent annual financial disclosure, for 2018, the company earned perhaps as little as $200,000 last year on all four of its projects in India. The maximum revenue reported at Trump Organization from the four India projects dropped from $6 million in 2017 to $2 million in 2018, although some income from India might be counted as contributing to other accounts.

Though his brand has not surmounted India’s luxury slump, Trump remains quite popular here, with many Indians seeing him as tough on terrorism, pro-business and a crucial ally for Modi, another outspoken populist.

“Tell me how many Indian prime ministers have been able to visit the U.S. and get the president to mingle with the people like Modi has done?” said Varun Suhag, an Indian pilot who bought two apartments in the Gurugram development. “In decades, we have not seen such a relationship.”

Shortly after his election in November 2016, Trump met in New York with three of his partners from India: Atul and Sagar Chordia, brothers who built the Pune towers, and Mehta, who is involved in the projects in Kolkata and Gurugram. That gathering provoked questions about just how involved Trump would be in his family business once he moved to the White House.

In 2018, Donald Trump Jr. visited Mumbai, India’s seaside business capital, to attend a glittering sales party near the construction site for the more than 75-floor Trump Tower there, a golden-hued, 400-unit building where residents will have access to a private jet service.

Amruta Fadnavis, the wife of a former chief minister for the state of Maharashtra, which includes Mumbai, predicted in a speech at the party that the Trump brand would propel the project to success.

“Because of this tower, it will boost the confidence of international investors,” she told the crowd, a Who’s Who of fashion designers, government officials and real estate titans.

The visit coincided with an extensive advertising campaign. An ad in the Times of India occupied two full pages, with a large photo of the younger Trump, and asked: “TRUMP HAS ARRIVED. HAVE YOU?”

The ad offered those who placed deposits on units in Gurugram a chance to have dinner with the president’s eldest son. For interested buyers in Mumbai, there was a Champagne reception.

Trump-branded projects in India are worth around $1.5 billion, according to Mehta, founder of Tribeca Developers. Apartments in the buildings sell for between $600,000 and more than $2 million. The Kolkata project, with the least expensive apartments, has done better than the others, selling around 80% of its units.

But early sales figures are only one part of the story, real estate analysts say. Kapoor, of Liases Foras, said real estate developers sometimes offer a variety of incentives, including price discounts, to boost numbers.

Pawandeep Singh, the managing director of 3D Realty, a wealth management company that helps sell apartments in the Trump project in Gurugram, said the Trump brand was still desirable in India, but that property prices had stagnated and international investors were staying away.

Sales have slowed at the Gurugram project, he said, with most purchases occurring within the first few months of its launch in early 2018.

“Even Trump, with the brand it is, is not able to extract the money it would have had the market been better,” he said.

Some buyers have started reassessing their investments.

Ritesh Shah, a diamond trader, said he and more than 50 others received a 10-15% group discount when they purchased apartments, around 2014, in the planned Mumbai tower, where units start at about $1.1 million. He thought the strength of the Trump brand would help fast-track construction in a city where building delays are common, and expected a 60% or 70% appreciation in value by the time the tower opened.

Now, in light of the tough economy, Shah said he only expected to break even. And the completion date for the tower has been pushed back from 2018 to 2020.

“Because it’s Trump, the tower will appreciate, but a lot slower than what we had thought,” he said.”

The Trump partner in Mumbai is Abhishek Lodha, whose Lodha Group, one of India’s largest real-estate developers, did not return requests for comment. In an October interview with the Economic Times, an Indian news outlet, Lodha said the company planned to cut premium housing from 30% of its holdings to 17%, and all of its new investments were in affordable housing and office space.

As India’s market liberalized in the 2000s, buyers found it easier to obtain mortgages and a building boom followed.

But in the past few years, banks stopped funding projects, responding to a growing number of dodgy deals. Builders struggled to get government clearances. Projects faced long construction delays, and buyers with money tied up in them sued developers.

By many measures, Pune has been hit notably hard.

In the past decade, as the city experienced a boom in the information technology sector, luxury buildings were constructed swiftly, with the spacious apartments in Trump Towers Pune being among the more extravagant options.

A promotional video for the towers pieces together footage of an airplane, a speedboat and a fizzing glass of Champagne. Buyers included the famous Bollywood actors Rishi and Ranbir Kapoor, and Rajesh Uttamchandani, a founder of Syska, the massive Indian lighting company.

But between 2018 and 2019, the number of unsold luxury apartments in the city jumped by 56%. For the third quarter of 2019, Pune property prices dropped by 3.5%, the worst performance among India’s big cities.

Anil Deshmukh, a real estate agent in Pune, said that sheer brand might was not enough to overcome challenges to India’s property market, and a turnaround was unlikely for the next five years.

Would Trump’s visit to India help?

“If the promise of investment follows, that could give consumers new confidence,” he said. “Let’s see.”