At Singapore's Changi Airport, it's an adventure before your flight departs

The 10-story Jewel, offering visitors a forest, indoor waterfall and more than 280 stores and restaurants, hopes to make the Singapore airport a destination in itself 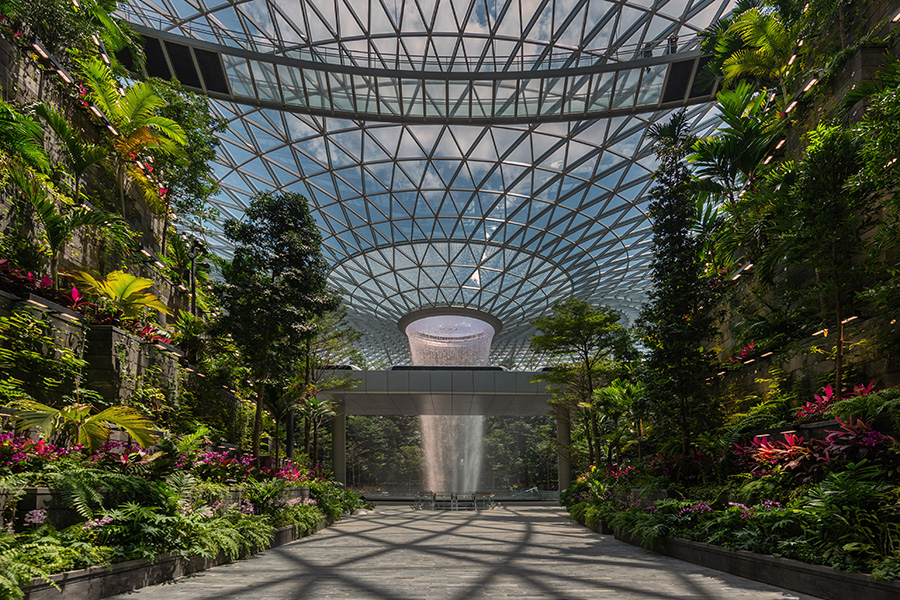 At first glance, visitors to the new Jewel complex at Singapore’s Changi Airport might feel like they have entered some mythical dimension. An indoor waterfall — the tallest in the world — drops 130 feet from an oculus the size of a bus. A Canopy Park has nets for bouncing and walking strung as high as 80 feet above the ground. A forest of 1,400 trees provides greenery and shade. The multi-floored Jewel, an asymmetrical toroid-shaped building between the airport’s existing terminals and the air-traffic control tower, opened officially April 17. The result of four years of construction and $1.25 billion in investment, the commercial and entertainment structure aims to do what no other building has done: make an airport the destination.
“Singapore is a tourist destination, but 30 percent of the people coming through Changi don’t visit,” said Ivan Tan, a senior vice president for Changi Airport Group. The country wants to draw those passengers on connecting flights, get them out to experience a taste of Singapore, so that they might come back for a longer stay. The centerpiece of the building is the Forest Valley with a terraced garden, and its heart is the Rain Vortex waterfall. The top floor, called Canopy Park, features bouncing and walking nets, a 165-foot sky bridge, two mazes (one with mirrors, the other hedges), a giant slide, and eight bars and restaurants. The exterior of the 10-story building, which was designed by architect Moshe Safdie and built by CapitaLand, an Asian developer, is made of glass and crisscrossed with an aluminum-and-steel framework, allowing the entire interior to be bathed in natural light. “Airports are places of anxiety, and I’d like people to be uplifted and serene and feel good about themselves,” Safdie said. The Jewel is “the first airport center that serves passengers, airport employees and the people of the city.” The Jewel offers plenty of options for keeping visitors busy, even if shops and other amenities in airports are nothing new. Amsterdam’s Schiphol has a branch of the city’s famous Rijksmuseum, Vancouver International Airport features a 30,000-gallon aquarium, and at Kennedy International Airport in New York, JetBlue once ran a concert series. Hong Kong International Airport’s SkyMart and SkyPlaza have more than 350 shops and restaurants spread across two terminals. But the Jewel is an airport mall on steroids: In total, there are 280 retail outlets and food and beverage stops. Familiar stores line the floors — Foot Locker, Nike, the first Shake Shack in Southeast Asia — as well as local Singaporean brands like Naiise and Supermama. Other amenities include a 130-room Yotelair hotel, a full-size supermarket, an 11-screen cinema and — don’t forget it’s an airport — early check-in counters. In 2018, nearly 66 million passengers flew through the airport, a number that continues to rise. “There is growing demand for air travel,” Tan said, “Changi had to see how to have capacity to meet that demand.” Tan and other officials hope that the amenities will lure travelers to leave the terminals during their layovers, even for a short time. (Singapore’s entry policy, which allows citizens of about four-fifths of the world’s countries to enter without a visa, should help.) For that reason the Jewel was designed to adjoin one terminal and link to two others by footbridges (passengers in Terminal 4 need a shuttle bus). As entry to the Jewel does not require airport security screening, Tan believes locals will also arrive in droves. Officials estimate between 40 million to 50 million people will visit during the first year, he said, 60% of whom are expected to be residents. “Gardens have always been a place of pleasure,” said Charu Kokate, the principal at Safdie Architects who oversaw the project. On a recent tour of the Jewel, Kokate pointed out marble floors from China, lava stone blocks from Indonesia and other design considerations. There were many layers to the project, she said. “The sky, the waterfall, the people hidden by the landscaping. Through the glass roof you can see a plane flying overhead, up there are reflections of people next to the slide,” she said. “It’s very active and yet tranquil.”