Darjeeling is suffering the effects of rigid plantation agriculture and a career in tea estates is losing its appeal. Across the border, Nepal's tea community is in the budding stages of a loose-leaf revolution 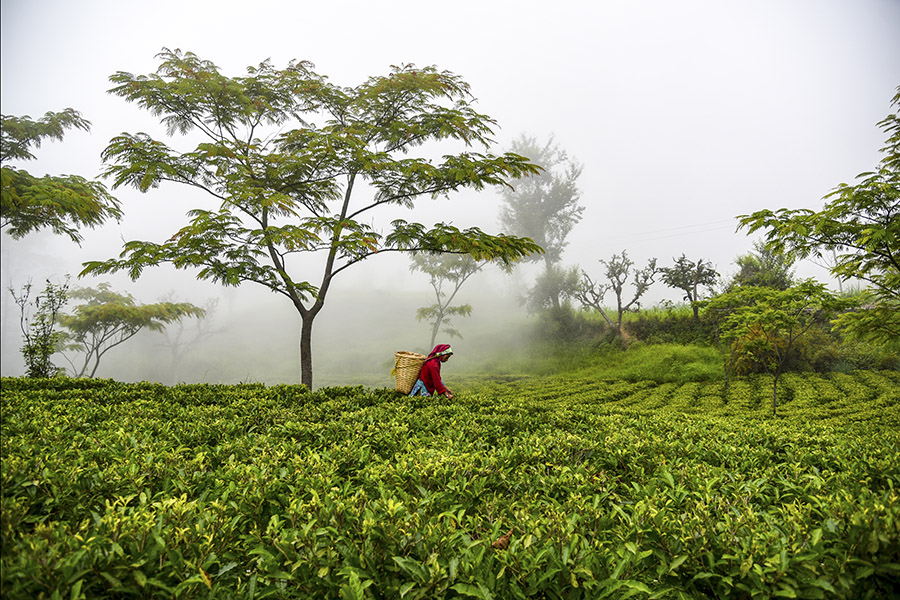 In a photo provided by Bachan Gyawali, workers hand-harvest leaves at the Jun Chiyabari Tea Estate, in the Dhankuta district of Nepal. Nepali growers working the same kind of steep, high-elevation fields that granted Darjeeling its once-unmatched reputation are making remarkable, inexpensive teas in a style all their own. (Bachan Gyawali via The New York Times)

In 1848, the British East India Co. gave botanist Robert Fortune a mission: Smuggle live tea bushes out of China against the emperor’s strict edicts and plant them in the Himalayan foothills of West Bengal, to propagate a new tea industry under British control.

The heist took years. The plants struggled to flourish in Indian soil, 6,000 feet above sea level. But by the close of the 19th century, Darjeeling plantations were growing some of the greatest teas in the world: vibrant brews that embodied a meadow’s worth of fruits and flowers, with a refined airiness that stood in stark contrast to India’s brawny lowland teas. Darjeeling quickly earned the nickname “Champagne of teas,” and its fame grew in the wake of the British colonial retreat.

But today, Darjeeling is suffering. A century and a half of rigid plantation agriculture has taken its toll on soil. Switching to organic growing methods to meet consumer demand is expensive. The skilled work of overseeing an estate’s production, once a prestigious career for Indians raised in the colonial system, is losing its appeal, and decades of disputes with labor unions have cut harvests dramatically during strikes.

A few hours across the border, however, Nepal’s tea community is in the budding stages of a loose-leaf revolution. Growers are planting tea bushes in the same kind of steep, high-elevation fields that granted Darjeeling its unmatched reputation. Entrepreneurial farmers and factory owners, unburdened by Darjeeling’s colonial-era baggage, are developing remarkable styles of tea all their own at a fraction of the price, often with younger, more vigorous bushes thriving in comparatively richer soil.

You won’t find Nepali teas at your local Starbucks, but they’re increasingly popular with specialty boutiques and online stores across North America and Europe, that are eager to pounce on rare teas from emerging regions.

“Nepal and Darjeeling are so close together, but there’s a characteristic of Nepali tea that’s brilliant all by itself,” said Jeni Dodd, 48, an American buyer and consultant for tea shops and cafes who rents an apartment in Kathmandu, Nepal, for frequent visits. “There’s no bite or astringency at all. They’re full-bodied but smooth and accessible.”

A legend says that in 1863 the Daoguang Emperor of China gave Nepal’s then prime minister, Junga Bahadur Rana, a gift of tea plants; records show the country’s eastern Ilam district, near the Indian border, began production shortly after Darjeeling’s plantations were established.

Historically, most Nepali leaves were processed into inexpensive broken-leaf black tea grades destined for domestic consumption and export to the Indian commodity market. Finer whole-leaf “orthodox” grades were usually sold to Indian merchants, then labeled by Indian sellers as Darjeeling tea. (Today, the amount of tea sold as Darjeeling is roughly four times the maximum yield of the region’s 87 origin-protected estates.)

When the brothers Bachan and Lochan Gyawali established Jun Chiyabari Estate in the Dhankuta district of Nepal in 2000, the last thing they wanted was to mimic Darjeeling’s gardens just 150 miles away. 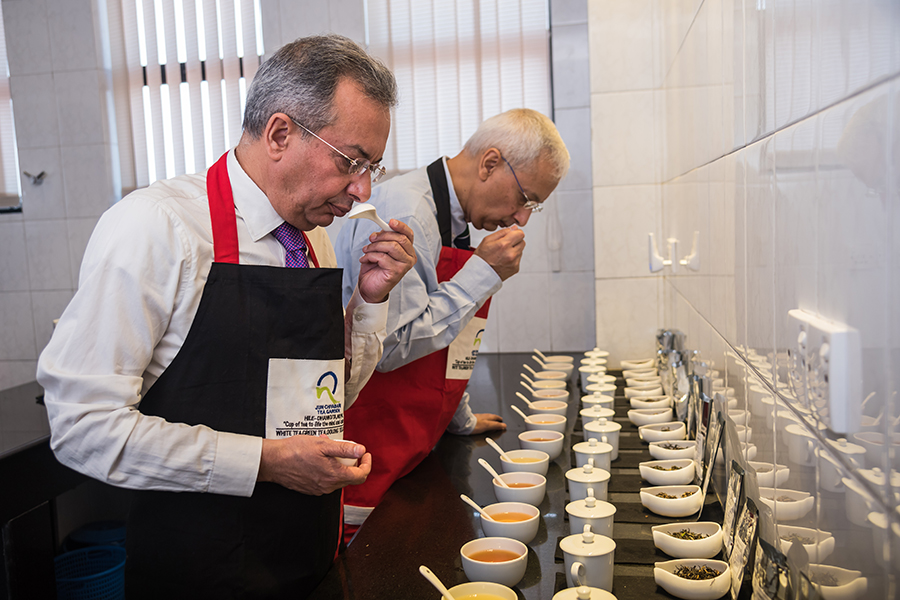 Brothers Bachan Gywali, left, and Lochan Gawali taste-test their teas at their Jun Chiyabari Estate, in the Dhankuta district of Nepal, May 5, 2019. Nepali growers working the same kind of steep, high-elevation fields that granted Darjeeling its once-unmatched reputation are making remarkable, inexpensive teas in a style all their own. (Purnima Shrestha/The New York Times)

“Nepal has always been classified as a poor cousin of Darjeeling,” said Bachan, 57, “and when we spoke with tea buyers, it became clear there’d be no reason for them to buy a similar tea from Nepal when Darjeeling will always be Darjeeling.”

Tradition and market demand have standardized Darjeeling’s production into particular styles called “flushes”: Leaves picked in early spring are processed as a light, piney first flush, while more mature leaves picked later in the season are used for a fruity, full-bodied second flush. Jun Chiyabari’s equivalent of first flushes exhibits the full rush of alpine air and sprightly florals that have made Darjeeling teas so famous, but the estate’s real specialty is small productions influenced by East Asian tea regions like China and Taiwan.

Under the Gyawalis’ direction, Jun Chiyabari’s tea makers are encouraged to experiment and produce unique organic Himalayan teas, which the estate then sells directly to wholesale buyers. (Nepali teas are officially banned from the Indian auction market.) The result is season after season of heady black, white and oolong styles whose flavors evolve through a dozen steepings and linger for hours after your final sip.

Darjeeling estates have experimented with white teas in recent years, but the style has really become a signature of Nepali innovation. The spring white buds from Nepali Tea Traders, a Massachusetts tea importer dedicated solely to specialty teas from Nepal, produce a drink as distinctive as white tea gets — carrying the essence of sweet summer corn slathered with butter, heavy enough to leave a film on your lips.

Unlike Darjeeling tea, which is produced on estates that own their land outright, almost all Nepali tea is grown on tiny plots owned by independent farmers who then sell fresh leaves to factories. Nepali Tea Traders imports small-batch productions from an Ilam factory that buys fresh leaf from a cooperative of 47 small-scale farmers.

The number of players in the country’s tea economy has made the industry difficult to organize, and critics in the Western tea business point to it as the reason Nepali producers have struggled to maintain consistent quality from year to year.

“It’s a chaotic scene, very Wild West,” said Kevin Gascoyne, an owner of the Montreal tea boutique Camellia Sinensis, who has bought tea from Darjeeling for 25 years. “A few gardens are taking advantage of the situation to innovate, but others are more rustic operations. Some lucky batches work out, and others don’t.”

But Rabin Joshi, 36, an owner of Nepali Tea Traders, considers that a strength. “They’re not just workers trying to make ends meet,” he said. “These farmers treat their plants as their own babies.” 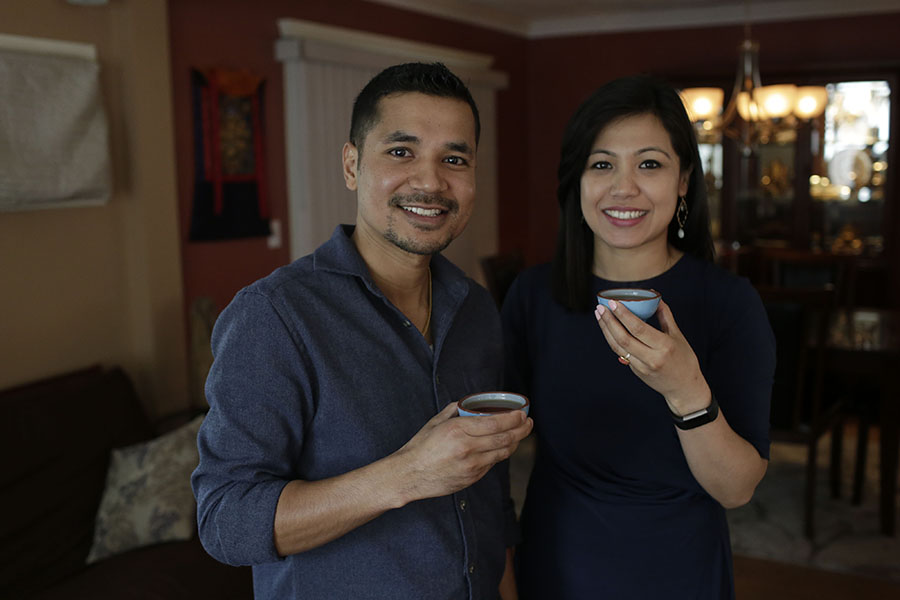 Rabin Joshi and Sunita Karmacharya, Nepali tea importers, enjoy a cup at home in Saugus, Mass., May 10, 2019. Nepali growers working the same kind of steep, high-elevation fields that granted Darjeeling its once-unmatched reputation are making remarkable, inexpensive teas in a style all their own. (Hadley Green/The New York Times)

The business was founded in 2012 by Maggie Le Beau, a former marketing executive who saw promise in Nepal’s tea industry and wanted to give independent producers direct access to the lucrative American market. Joshi and his wife, Sunita Karmacharya Joshi, both Nepali immigrants, became involved with the company after the country’s devastating 2015 earthquake.

“We were donating money,” Joshi said, “but realized collecting donations wasn’t enough.” The couple was attracted to Le Beau’s approach to social enterprise and became co-owners in 2017.

These are noteworthy exceptions in a global tea industry that relies generally on poorly compensated migrant labor to harvest fresh leaves, and offers few protections for its workers.

As Nepal’s specialty tea industry improves its output and sophistication, Banksota and his family are looking for ways to build the country’s tea into a brand like Darjeeling without succumbing to its pitfalls. “We’re in a honeymoon phase,” he said. Tea is an ancient drink, after all, and while trends move quickly, nurturing a consistent and sustainable tea industry takes time.

“It could be a very short success story if we’re not on our game,” said Bachan Gyawali, of Jun Chiyabari. “To be sustainable, you need to be more than the Johnny-come-lately, and it will require consistency and some very hard work over the next 50 years.”

— Also seek out productions from the Mist Valley and Guranse Estates, which you can buy from Upton Tea and What-Cha: Upton Tea, uptontea.com; What-Cha, what-cha.com

Tweets by @forbesindia
Why there has been a surge in working single mothers in the US
Uber, after going public, reports a $1 billion loss