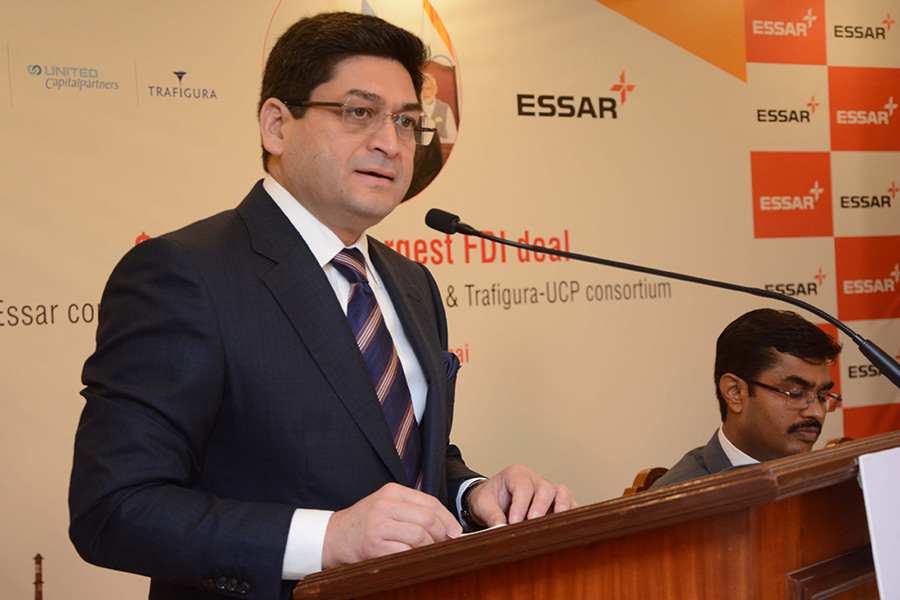 
The Mumbai-based Essar Group, controlled by billionaire brothers Shashi and Ravi Ruia, announced the completion of a $12.9-billion deal (around Rs 82,722 crore) to sell its crude refinery, port and a power plant at Vadinar in Gujarat to a consortium of Russian oil company, Rosneft; global commodities trading firm Trafigura; and UCP Investment Group, a private equity investor.

The deal is significant on many fronts. First, it represents the largest foreign direct investment (FDI) in India. Second, it enables the $15 billion-Essar Group to significantly deleverage its balance sheet and helps lenders who have been struggling with high levels of doubtful loans.

As per the deal, which was first announced on the occasion of Russian President Vladmir Putin’s visit to India in 2015, the Essar Group – with interests ranging from steel to shipping and power – will sell 98.26 percent stake in Essar Oil Ltd to the consortium. Essar Oil owns and operates a 20 million tonnes per annum (MTPA) refinery in Vadinar, a network of 3,500 fuel retailing outlets, a 1,010 MW-captive power plant, and a port that can handle 58 million tonnes of cargo per year. While the refinery and retail assets are valued at $10.9 billion, the port is valued at $2 billion.

The group’s debt is pegged at Rs 80,000 crore and according to Prashant Ruia, director of Essar Capital, the deal with Rosneft, Trafigura and UCP will help Essar retire debt to the tune of Rs 70,000 crore. Essar was advised on the deal by Russian investment bank VTB Capital.

“With this deal, we have completed our monetization and deleveraging programme, which is the largest undertaken by any corporate in recent years,” Ruia said in a statement issued on Monday.
“We have substantially deleveraged our portfolio companies’ balance sheets, reducing debt by over $11 billion.With the completion of our capex programme, we now look forward to a period of growth in our wider portfolio of businesses.”

According to an Essar spokesman, pursuant to the deal, Essar has repaid $5 billion of debt at the holding company level, and another $600 million at the level of operating companies like Essar Oil and others. Another chunk of debt, to the tune of $5.4 billion has become “non-Essar exposure,” according to the spokesman, implying that this debt has been assumed by the new owners of the assets. “The closing of the deal is a remarkable achievement for Rosneft too: The company has entered the high-potential and fast-growing Asia-Pacific market. The acquisition of the stake in the Vadinar refinery creates unique opportunities of synergies with existing Rosneft-owned assets and will help improve efficiency of supply to other countries within the region,” Igor Sechin, CEO of Rosneft said in the joint statement.

The deal, which was originally scheduled to be completed by March this year, faced delays with some of Essar’s lenders, like the Life Insurance Corp. of India and others, demanding that their dues be cleared before approving the transaction. Essar subsequently gave an unconditional undertaking to LIC and other lenders, including State Bank of India (SBI), ICICI Bank, IDBI Bank, Axis Bank, Yes Bank, that their dues would be cleared within three days after the deal for Essar Oil closes.

All the aforementioned lenders have been in the news of late for rising bad loans and the tough stance that some of them are taking vis-à-vis large corporate borrowers, which account for a major chunk of this outstanding portfolio.

In April, Essar had announced the sale of its business process outsourcing unit Aegis to Capital Square Partners for a reported consideration of $300 billion. Post the divestment of these asserts, the group’s asset base stands at $17 billion. The conglomerate remains invested in the oil and gas space through its 9-million tonnes per annum (MTPA) refinery in Stanlow, UK, and coal bed methane acreage in India.