The IT major retains revenue guidance at 7-9% for FY15; Attrition peaks to 20.1% during the September quarter 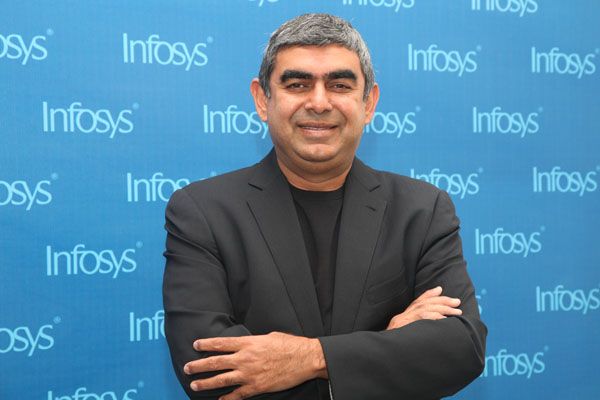 Vishal Sikka, the CEO & MD of InfosysIndia's second-largest software-services exporter Infosys on Friday cheered the markets by posting a 3.1 percent sequential dollar revenue growth for the quarter ended September, in-line with Street expectations, and kept its dollar-revenue guidance intact at 7-9 percent for FY15. The earnings announcement, the first since  Vishal Sikka took over as the new CEO and managing director, sent the IT major’s shares up 6.02 percent in afternoon trade on the Bombay Stock Exchange.
Many brokerages had expected the company to post dollar revenue growth in the range of 2.2-3.5 percent during the second quarter of the current fiscal.
The Bangalore-based IT firm recorded net profit at $511 million on revenue of $2.2 billion during the July-September stretch backed by surge in outsourcing demand and improved business mix. Year-on-year profit jumped 33.4 percent, while revenue was up 6.5 percent annually. In rupee term, net profit was recorded at Rs 3,096 crore during the second quarter, up 7.3 percent sequentially, while year-on-year profit was up 28.6 percent. The IT-services company posted revenue of Rs 13,342 crore, growing 4.5 percent quarter-on-quarter, while y-on-y it was up 2.9 percent.

Typically for the export-heavy $108 billion Indian IT industry, July-September quarter is a seasonally strong period as client budget for IT spend starts ramping up.


“Digital transformation is reshaping the business of every one of our clients. We see this as a great opportunity to help them renew the core of their business as well as to expand into new frontiers and are seeing early positive results”, said Vishal Sikka, chief executive officer and managing director, Infosys in a statement. “Our strategy is to apply the same principles to our own business in order to capture this opportunity and accelerate our growth, within our culture of lifelong learning and purposeful work."

A report by Kotak Securities released early this month indicated that the overall demand scenario has improved across sectors. “The US economy has continued to show signs of improvement. This should bode well for calendar year 2014 revenue growth. We expect deeper penetration by Indian companies to increase outsourcing business from Europe,” the report noted, adding that for the top four Indian IT firms (TCS, Infosys, Wipro and HCL Technologies) dollar revenue is expected to grow by 3-5 percent sequentially during the July-September stretch.

India’s largest IT-services company TCS has already indicated that, growth during the September quarter should be in line with its expectations. During the second quarter, Infosys and its subsidiaries added 49 clients. The company said its liquid assets including cash and cash equivalents were $5,444 million as on September 30, 2014 as compared to $4,943 million as on June 30, 2014.

Infosys announced an interim dividend of Rs 30 per share. It also announced a 1:1 bonus issue of equity shares and a 1:1 stock dividend of American Depositary Shares (ADS), to increase liquidity of its shares and expand the retail shareholder base.

“On several fronts, our efforts to bring in operational efficiencies yielded encouraging results during the quarter”, said U B Pravin Rao, Chief Operating Officer. “We have seen positive results of some of our interventions on sales, margins and attrition, and we will continue to focus on these areas.”

During the September quarter, Infosys had net addition of 4,127 employees. As of September 30, total employee base of the company stood at 165,411.

“We have been able to improve our margins during the quarter and feel confident of sustaining these within a narrow band”, said Rajiv Bansal, CFO, Infosys. “This is giving us increased confidence to make the investments required to meet our growth aspirations.”

Earlier considered as an indicator of Indian IT industry's overall performance, Infosys has failed to record market leading growth over the last few fiscals. Even for FY14, Infosys managed to touch the lower-end of its guidance at 11.5 percent, still below the industry growth rate of 13 percent in FY14. The IT firm’s dollar revenue outlook of 7-9 percent for FY15, still lags the 13-15 percent growth expected for the industry by Nasscom.

Over the last one year top-level exits, high attrition rate across the board and below industry growth rate has cast a shadow over the company's future. However, considering the current upbeat earnings momentum, analysts feel with Sikka coming on board it would help shed some light over the road ahead.


From August 1, Sikka took over from S D Shibulal as the CEO of the company.


Shares of Infosys rose 6.02 percent at Rs 3865 in morning trade on the Bombay Stock Exchange on Friday, while the sensitive index, Sensex, was down 1.03 percent.