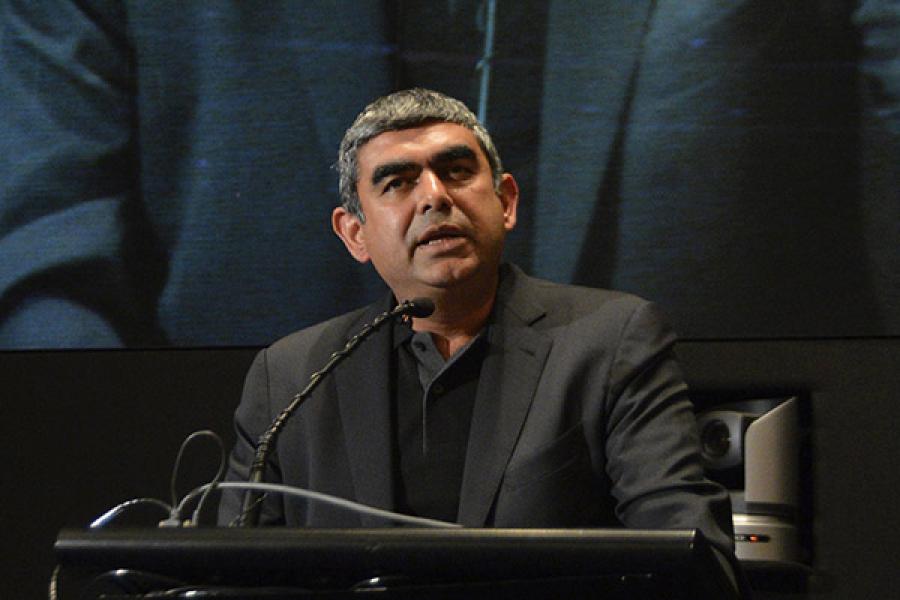 Image: Reuters
Vishal Sikka, CEO & MD Infosys
Infosys yet again projected revenue growth for the current fiscal 2015-16 below Nasscom’s expectation for the industry. The country's second-largest IT services exporter on Friday predicted a dollar revenue growth of 6.2-8.2 percent in FY16, lagging the 12-14 percent growth expected for the IT sector.
Once considered as the IT bellwether, over the last few fiscals, Infosys has failed to record market-leading growth. Even for the recently concluded fiscal FY15, the Bangalore-based IT major posted topline growth of 5.6 percent, much below its projected dollar revenue growth of 7-9 percent for FY15.
However, in constant currency terms, Infosys expects FY16 revenue to grow between 10 and 12 percent. Constant currency growth is typically seen as an indicator of real growth as companies with large foreign operations use this method to eliminate the effects of exchange rate fluctuations while calculating financial performance.
For the quarter stretching from January to March, Infosys posted a 2.6 percent sequential decline in dollar revenue at $2,159 million, while year-on-year it was up 3.2 percent. Net profit during the March quarter stood at $498 million, down 4.6 percent sequentially. For Infosys, the March quarter was largely hit by cross-currency volatility impacting its profitability. Softness in some of its verticals such as energy and telecom also was a dampener during the January-March period.
In rupee terms, the IT-services exporter, recorded net profit of Rs 3,097 crore during the March quarter, down 4.7 percent quarter-on-quarter. Revenue was down 2.8 percent sequentially at Rs 13,411 crore during the January-March period.
"We see the industry going through a fundamental and structural transition. Despite being a challenging quarter, I am encouraged by the early successes in executing our Renew-New strategy, on a foundation of learning,” said Vishal Sikka, CEO and managing director, Infosys. “Our focussed employee engagement initiatives over the last few months have resulted in containing employee attrition to one of the lowest in recent times. And our investments in innovation and in renewing our capabilities are helping to elevate our client relationships,” he said.
For the full year ended March 31, 2015, Infosys’s net profit was up 15.8 percent at Rs 12,329 crore while revenue went up 6.4 percent at Rs 53,319 crore during FY15.
"We see the leading indicators of improvement at Infosys over the coming 3-4 quarters reflected in declining attrition, increased net hiring, sales and marketing investments and progression in client mining. Over the medium-to-long term, success of Infosys's strategy (from automation, new platforms, etc) should reflect in higher per capita revenues," said Viju K George, analyst with JP Morgan, in its report.
"Sikka’s commentary highlights that he appreciates the importance of the right balance between incremental change and disruption. We see this as a positive as Sikka seems quite conscious of this balance, steering clear of the extremes. The company is likely to retain the current organisation structure as well without significant disruption," said  George.
Over the last few years, top-level exits, high attrition rates across the board and below industry growth rate have cast a shadow over the company's future. But Sikka’s appointment in June last year was expected to shed some clarity over the road ahead for Infosys.
In an export-heavy and highly commoditised $146 billion Indian IT industry where companies clone each other’s offerings, Sikka is looking to create a differentiating model for Infosys backed by newer technologies such as automation and artificial intelligence. The new strategy of the IT major would be to create a ‘next generation services company’. Setting an ambitious target for the company, Sikka is looking at revenues of $20 billion by 2020.
"The management has a vision to achieve revenues of $20 billion by FY20. This would include about $1.5 billion contribution from acquisitions. The management expects to derive about 10% of this revenue from new service areas such as Artificial Intelligence, design thinking and platform based offerings," said Credit Suisse in its report, adding that the management expects Infosys to return to industry leading profitable growth by FY17, the report added.
For the year ended March 2015, in dollar terms, Infosys posted revenues of $8.7 billion.
“The long-term strategic plan reflects Infosys’s focus on next-generation services and delivery models. Infosys is working on multiple projects in areas like open source technology, design thinking and platforms. We believe that, these initiatives will shore up the growth rates of Infosys and sustain margins over the longer term,” said Dipen Shah, head of private client group research, Kotak Securities.
Infosys and its subsidiaries added 60 clients during the year, taking its total active clients to 950 as of March 2015. Net addition of employees during the quarter stood at 6,549. The IT firm had 1,76,187 employees as of March 31, 2015. Attrition rate during the January-March quarter stood at 18.9 percent compared to 18.7 percent during the same period last year.
Infosys announced an average wage hike of 6.5 percent for its employees effective April this year. For its workforce abroad (onsite), the hike was 2 percent.
Infosys said the board has decided to increase the dividend pay-out ratio to up to 50 percent of post-tax profits effective fiscal 2015. The company’s current policy is to pay dividends of up to 40 percent of post-tax profits. The board recommended a final dividend of Rs 29.50 per share for fiscal 2015.
“We were able to improve profitability during the year even as we made investments into our employees and other strategic areas. We have been able to achieve this because of increased operating efficiencies despite a difficult pricing environment,” said Rajiv Bansal, CFO, Infosys. “Consistent with our objective of increasing shareholder returns, the board has approved an increase in the dividend pay-out ratio to 50 percent of post-tax profits. The board has also recommended a 1:1 bonus issue of equity shares and 1:1 stock dividend of American Depositary Shares,” Bansal added.
Shares of Infosys closed at Rs 1,996.25, down 5.95 percent on the Bombay Stock Exchange on Friday. The sensitive index, Sensex, ended the day down 1.07 percent.

Tweets by @forbesindia
Fortnight in pictures - April 10 - April 24
Walmart CEO: Waiting for consensus "can kill you"