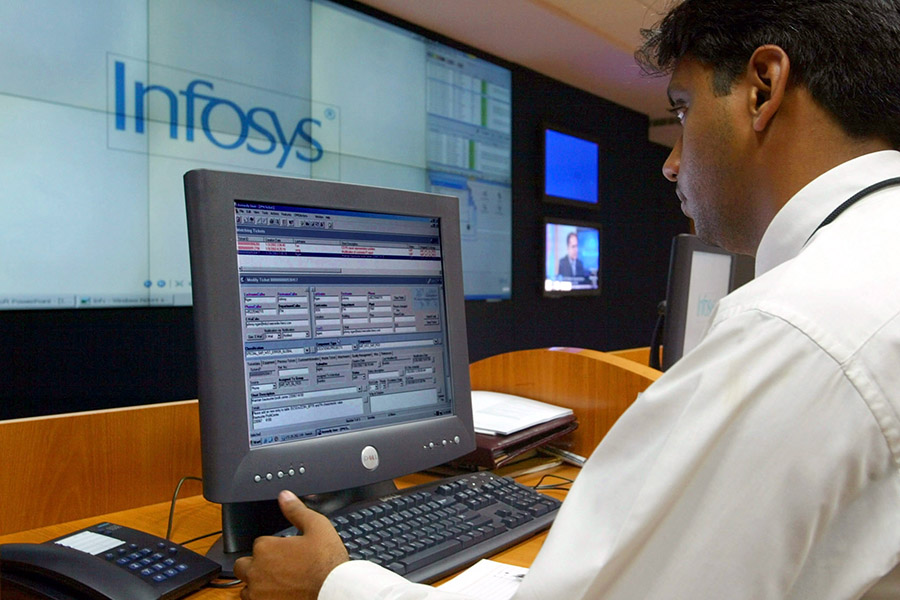 Infosys, India’s second-biggest software services provider by revenues, reported a 2.8 percent decline in profits for its fiscal fourth quarter, missing some analysts’ expectations. Its shares ended lower by 3.86 percent in Mumbai trading on Thursday. The company crossed the $10 billion milestone in revenue for the full fiscal year.

The earnings numbers could imply that the pick-up in spending that Infosys saw in the December quarter could take longer to become a more sustained return to tech buying by the company’s, and the IT industry’s largest customers — financial firms in America.

Profits for the three months ended March 31 fell to Rs 3,603 crore from Rs 3,708 crore for the December quarter, and rose by 0.17 percent from Rs 3,597 crore for the year-earlier period, Infosys – which counts JP Morgan Chase, Bank of America, Vodafone, BP Plc and Johnson Controls among its clients – said in a press release on Thursday.

“Unanticipated execution challenges and distractions in a seasonally soft quarter affected our overall performance,” CEO Vishal Sikka said in the release. “Looking ahead, it is imperative that we increase our resilience to the dynamics of our environment and we remain resolute in executing our strategy, our path to transform Infosys, and to drive long term value for all stakeholders.”
The $150 billion-Indian IT sector is facing headwinds including tougher visa rules in multiple markets and a shift away from handing jobs to cheaper labour in India to renting software and storage on the internet. In addition, Infosys is saddled with a vexing disagreement with founder NR Narayana Murthy, who has publicly questioned some of the company’s policies.

Sikka had first referred to the public rift between Murthy, a minority shareholder, and the board, led by R Seshasayee, as a “distraction” when the CEO spoke at an investor conference in February. On Thursday, he has hinted strongly that this distraction has materially hurt the company’s earnings.

The company also named Ravi Venkatesan, former chairman of Microsoft India and a director on the board of Infosys, to the post of co-chairman, offering what is clearly another measure to end the row with Murthy.

In their biggest markets, the top Indian IT companies are facing an erosion of their main IT outsourcing business, where they have little to stand out from one another. They are now attempting to increase business technology consultancy and solutions based on digital technologies to help customers make more money, rather than just save costs.

The advent of automation, increasingly powered by machine-learning software, has also prompted clients to ask that their orders be fulfilled with fewer human staff, hitting the IT companies’ revenues based on time spent and number of people employed to fulfil the orders.

“We continued to see many positive signs of our strategy execution; our software-led offerings continued to show strong momentum and client success, with continued adoption of Mana, our Artificial Intelligence platform,” Sikka added in the press release. Zero Distance, an effort to get every Infosys employee to innovate to help the company’s customers, marked its two-year anniversary and has found “strong client resonance”, he said. The company also curtailed further churn among staff, especially high performers, Infosys said in the release.

For the current fiscal year that ends March 31, 2018, Infosys estimates its dollar-terms sales to be in the range of 6.5 percent to 8.5 percent. The lower end of the range clearly takes into account the greater uncertainty in the company’s biggest market, the US. Sales for the fiscal year just gone by rose by 8.3 percent in constant-currency terms to $10.208 billion.

In dollar terms, which eliminates the effect of dollar-rupee exchange rate fluctuations, giving a clearer picture of actual growth in business, March-quarter sales were little changed at $2,569 million from $2,551 million for the previous quarter. That compares with the 1.3 percent increase that analysts Kuldeep Koul and Bhrugesh Parsawala at Mumbai brokerage ICICI Securities were expecting.

Abhishek Shindadkar, analyst at Equirus Securities, was projecting a 1 percent sequential increase in sales. Analysts, in general, were factoring in a pick-up in spending among financial clients.