Jeff Bezos is sued by his girlfriend's brother

Michael, the brother of Lauren Sanchez, acknowledged engaging with The National Enquirer, but said he did so to protect his sister and Bezos

By Michael Rothfeld and Jim Rutenberg 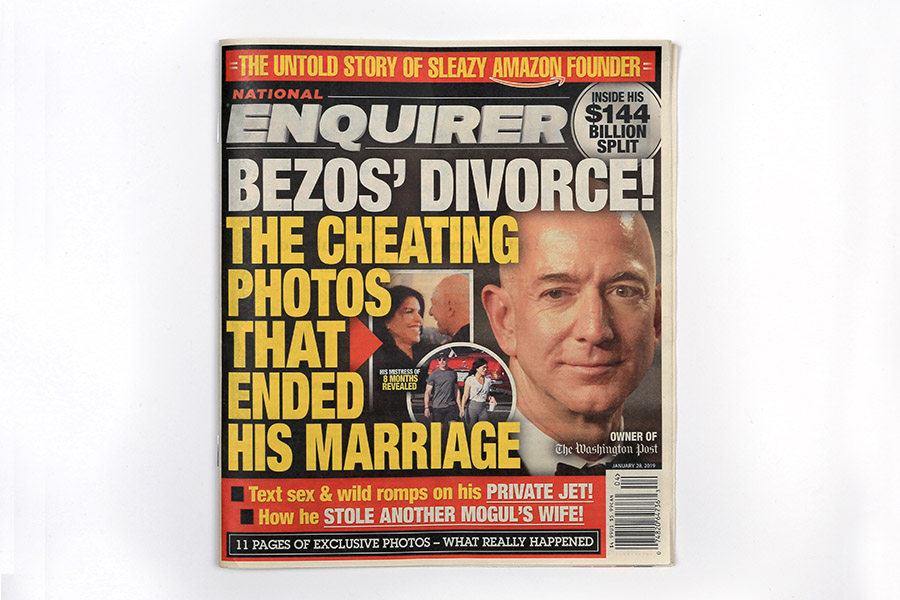 Jeff Bezos, the billionaire owner of Amazon and The Washington Post, on the cover of the National Enquirer in January 2019. The brother of Bezos’s girlfriend has filed a lawsuit accusing Bezos and his security consultant of defaming him in connection with a 2019 National Enquirer story revealing Bezos’s extramarital affair. Image: Patricia Wall/The New York Times

The brother of Jeff Bezos’ girlfriend has filed a lawsuit accusing Bezos and his security consultant of defaming him in connection with a 2019 National Enquirer story revealing Bezos’ extramarital affair. Michael Sanchez, a Hollywood talent manager and the brother of Lauren Sanchez, said in his lawsuit, which was filed Friday in state court in Los Angeles, that Bezos and Gavin de Becker, the consultant, had falsely told journalists that he had leaked “graphic, nude photographs” of Bezos to The Enquirer. Among its other claims, Sanchez’s suit says Lauren Sanchez and Bezos, the founder of Amazon and the world’s richest man, kept their affair secret on the advice of a psychic. Sanchez also said his home was searched by the FBI. The Enquirer story, published online on Jan. 9, 2019, contained reproductions of text messages from Bezos to Lauren Sanchez. The tabloid later claimed to have photos of Bezos in various states of undress, but did not publish them. The lawsuit blames Bezos and de Becker for spreading what it calls “the false narrative” that Michael Sanchez had betrayed his sister by peddling the story to The Enquirer. A lawyer for Bezos, William Isaacson, said his client “has chosen to address this lawsuit in court and we will do that soon.” De Becker declined to comment. In a statement provided by her lawyer, Terry Bird, Lauren Sanchez said, “Michael is my older brother. He secretly provided my most personal information to The National Enquirer — a deep and unforgivable betrayal. My family is hurting over this new baseless and untrue lawsuit, and we truly hope my brother finds peace.” A lawyer for Michael Sanchez, Enoch Liang, said in a statement that the lawsuit “speaks for itself.” Michael Sanchez’s assertions contain apparent inconsistencies. Bezos and de Becker, who investigated how The Enquirer got its exposé, have not publicly accused Michael Sanchez of leaking photographs to the tabloid. Instead, Bezos hinted in a blog post last February that materials relevant to the story made their way to The Enquirer through a hacking of his phone by Saudi Arabia, which has denied any role in the exposé. Bezos, who owns The Washington Post, suggested that the Saudis had been angry over the newspaper’s coverage of the killing of Jamal Khashoggi, a Saudi dissident and columnist for The Post who was murdered by Saudi assassins weeks after writing critically of Crown Prince Mohammed bin Salman for the paper. Bezos also cited the wooing of Crown Prince Mohammed by David J. Pecker, the chief executive of American Media, the publisher of The Enquirer, who was seeking Saudi investment in the company. Last month, the results of a forensic analysis commissioned by Bezos became public. It concluded with “medium to high confidence” that the Amazon founder’s iPhone X had been hacked after he received a video from a WhatsApp message sent to him from an account reportedly belonging to the Saudi crown prince, with whom the billionaire had swapped contacts at a Los Angeles dinner. The analysis did not reveal a Saudi connection to the materials obtained by The Enquirer. American Media said in a statement last month that Michael Sanchez was the “single source” for the exposé. According to an October 2018 contract reviewed by The New York Times, Michael Sanchez granted American Media the right to publish and license text messages and photographs “documenting an affair between Jeff Bezos and Lauren Sanchez” in exchange for $200,000. In his lawsuit, Michael Sanchez did not address whether he had provided text messages or photographs, or whether he was compensated by the tabloid. When federal agents and prosecutors examined allegations of wrongdoing in connection with The Enquirer’s handling of the story, American Media gave them evidence showing that Michael Sanchez had obtained text messages and photos of Bezos from his sister, four people with knowledge of the matter told The Times. In his blog post last year, Bezos quoted emails sent to de Becker’s lawyer by an American Media lawyer and a company executive, who wrote that “the photos obtained during our news gathering” included a nude “below-the-belt selfie.” American Media said in the emails that it would refrain from publishing the photographs if Bezos said publicly that he believed the exposé was not politically motivated. (The Enquirer had been a booster of President Donald Trump, who was at odds with Bezos.) After Bezos accused American Media of trying to extort him with the unpublished materials, which the company denied, federal prosecutors began looking into the matter.