The plan is the third major policy proposal of Harris' presidential campaign, and a continuation of her focus on economic issues 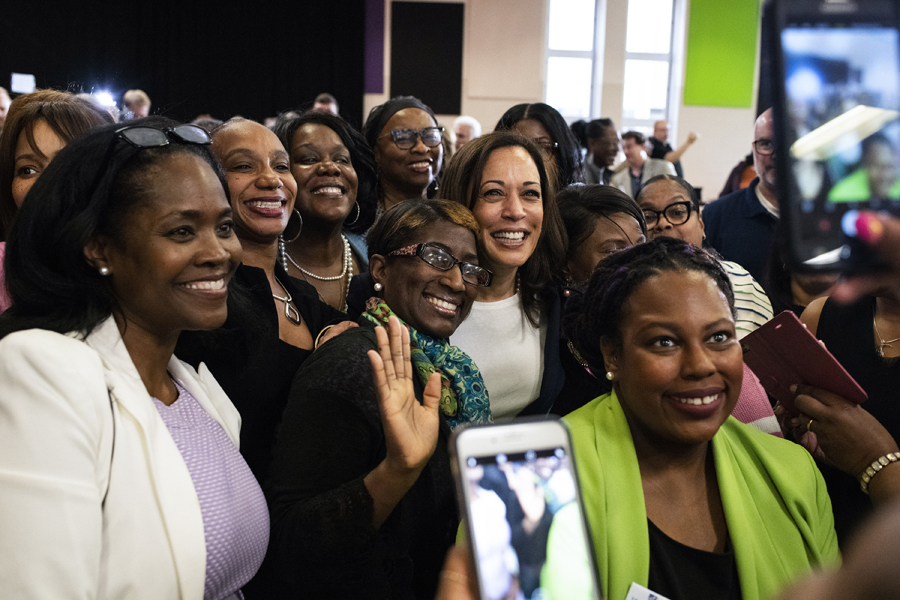 Sen. Kamala Harris (D-Calif.), a Democratic presidential hopeful, takes a photo following an American Federation of Teachers event on teacher’s pay and education in Detroit, May 6, 2019. Harris on May 20 announced a proposal to close the gender wage gap by requiring larger companies to certify that men and women are paid equally, in an effort to combat wage discrimination on a federal level. (Brittany Greeson/The New York)

Sen. Kamala Harris, D-Calif., on Monday announced a proposal to close the gender wage gap by requiring larger companies to certify that men and women are paid equally, in an effort to combat wage discrimination on a federal level.

Unlike previous federal legislation regarding the pay gap, which asked workers to report or sue their employer if discrepancies were suspected, Harris’ plan would proactively force companies with 100 or more employees to obtain an “equal pay certification” every two years, showing that they were paying men and women the same for analogous work, her campaign said.

The plan is the third major policy proposal of Harris’ presidential campaign, and a continuation of her focus on economic issues: As a senator and a candidate she has proposed using federal power to raise teacher pay, a slew of executive actions on gun control, and the LIFT Act, her signature policy, which would provide a refundable tax credit worth up to $6,000 for households.

She previewed the announcement at a rally in Los Angeles on Sunday afternoon and released full details through a spokesman Monday morning.

The most recent studies on the gender pay gap, which are not based on analogous work, show that women who work full time make 80 cents for every dollar paid to men, adding up to more than $400,000 in missed wages over the course of a woman’s career. The numbers are even worse for women who are also racial minorities — about $1 million in missed wages over a career for Latinas, Native American women and black women, according to an analysis by the National Women’s Law Center.

Under Harris’ proposal, companies that do not meet the pay certification standards would be fined 1% of their profits for every 1% difference in pay between men and women. The proposal also says that, should Congress fail to act, Harris would apply these standards to federal contractors unilaterally, barring companies that fail to obtain an “equal pay certification” from competing for federal contracts valued at more than $500,000.

“For too long, we’ve put the burden entirely on workers to hold corporations accountable for pay discrimination through costly lawsuits that are increasingly difficult to prove,” Harris’ campaign said in the announcement Monday. “We’ve let corporations hide their wage gaps, but forced women to stand up in court just to get the pay they’ve earned.”

Harris’ campaign has recalibrated in recent weeks, as the promise of a presidential bid that began with more than 20,000 people at a kickoff rally in Oakland, California, and strong first-quarter fundraising totals has met a harsher reality, and is now polling in the single digits among Democratic voters.

Harris recently began attacking President Donald Trump more directly on the campaign trail, and has pitched herself as a merge of the unifying rhetoric of campaign rivals such as former Vice President Joe Biden, and the party’s more liberal wing, such as Sen. Bernie Sanders of Vermont.

This week, Harris is set to campaign in central and western Iowa, where she is expected to highlight her economic message, particularly her plan to raise teacher pay.

Tweets by @forbes_india
Google-Huawei fallout: What you need to know
Meet the 'Swiggy Uncle'