The leaders of companies including Marriott, Delta Airlines, JPMorgan Chase and others are steeling themselves for a period of prolonged economic disruption and the prospect of a slow, halting recovery 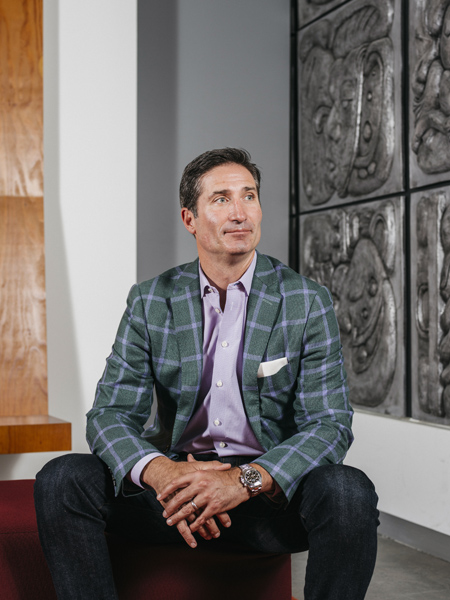 Brian Niccoll, chief executive of Chipotle, in Denver on June 19, 2018. Many of the nation’s business leaders are steeling themselves for a period of prolonged economic disruption and the prospect of a slow, halting recovery. (Benjamin Rasmussen/The New York Times)


With coronavirus cases around the country on the rise and states rolling back their reopening plans, many of the nation's top business leaders are steeling themselves for a period of prolonged economic disruption and the prospect of a slow, halting recovery.

“I’m less optimistic today than I was 30 days ago,” said Arne Sorenson, chief executive of Marriott International. “The virus is in so many different markets of the United States.”

Sorenson’s outlook, like those of many chief executives, has worsened in recent weeks as virus cases have spiked in the South and the West, leading some states to close businesses that had previously been allowed to open.

He said that after bookings at Marriott’s hotels rose in early July, they had recently fallen again.

“The last week was weaker than the week before,” Sorenson said.

While retail sales have mostly rebounded to pre-crisis levels and the stock markets remain buoyant, business leaders and economists still see serious cause for concern. Tens of millions of Americans are out of work. Important parts of the economy — including live sports, movie theaters and many tourist attractions — remain largely shuttered. Business districts are still primarily empty as people continue working from home. And as the virus spreads, new lockdowns could cause further economic disruptions.

Already, there are signs the recovery is losing momentum.

Air travel had been on the rise, with the Transportation Security Administration reporting a steady increase in passengers at U.S. airports. But Ed Bastian, chief executive of Delta Air Lines, suggested that momentum had sputtered in recent days.

“I have a more cautious view than I did four weeks ago,” Bastian said. “While the TSA numbers have continued to slowly tick up, the reality is that the cash that people are willing to commit to future travel decisions has stalled. The fear that the virus has created in the South has put people more into a stay-at-home mentality than we’d seen before.”

Many chief executives said they were broadly in favor of reopening the economy — arguing that it was vital for people to be at work.

“We will need to open up, but it has to be done safely and properly,” said Jamie Dimon, chief executive of JPMorgan Chase. “And if we make mistakes along the way or if situations change, we should adapt and recalibrate.”

In the last week, companies and states have continued to adjust. Last week, California shut down indoor dining, bars and movie theaters it had previously allowed to open back up. And Louisiana ordered its bars closed.

And after Walmart announced that it would require all its customers to wear masks, several other major retailers, including Target, Walgreens and CVS, made similar announcements.

“As individuals, we have that responsibility,” CVS’ chief executive Larry Merlo said last week. “My mask protects you, and your mask protects me.”

Until last week, Marriott had stopped short of requiring guests to wear masks in the public spaces of its hotels.

“We have not gone that far yet,” Sorenson said Wednesday. “That doesn’t mean we won’t.”

The next day, Sorenson joined other hotel industry executives in announcing that masks would be required.

Yet with the virus spreading widely and rapidly around the country, there is little hope that masks alone will allow for a return to business as usual anytime soon.

“Most CEOs today believe that until there is a more effective treatment or a vaccine, that work and life are not going to go back to normal,” said Julie Sweet, chief executive of Accenture.

With Congress potentially preparing another round of relief, business leaders had differing takes on what actions would be most helpful to the U.S. economy.

Rich Lesser, chief executive of Boston Consulting Group, argued that it was imperative for Congress to provide more relief for the most vulnerable members of society, particularly essential workers, the elderly and those with compromised immune systems.

Lesser said Congress should consider a suite of measures, including distributing masks, increasing testing and distributing food to the vulnerable. At scale, these efforts could reduce hospitalizations by as much as 40% to 70% and cost up to $100 billion a month, he said. But that huge sum, he said, was small compared with the roughly $1 trillion a month the federal government spent on coronavirus relief efforts from March through May.

“Without the federal government doing something, we will miss the window,” Lesser said, adding that the virus was spreading rapidly and becoming entrenched in communities. “We need the government to say we are focused on protecting the vulnerable. If we wait to September, it will be too late.”

Sorenson of Marriott and Bastian of Delta — both of whom have large workforces vulnerable to buyouts, furloughs or layoffs if the economy does not recover swiftly — called for the expansion of unemployment coverage.

“The single most important feature of the next package should be decent personal unemployment insurance,” Sorenson said. “We’ve got tens of millions of people who are still out of work. As long as they’re out of work, we should make sure that they’re not driven into a hole that is so deep that they’re not going to be able to come out of it.”

And Hartz of Eventbrite said she wanted to see more support for small businesses.

“Something is going to have to give,” she said. “If there is not federal relief that is usable and tuned to the needs of these small businesses, they’ll go out of business.”

More than anything, though, many of the chief executives called on the public to do its part in curbing the spread of the virus by wearing masks and following the recommendations of health experts.

“The reality is the politicization of masks and the virus has caused a lot of frustrations,” Bastian said, adding that Delta has put a number of passengers on no-fly lists because they were making political statements by refusing to wear masks.

“The more stringent and compliant we are, the faster we’ll be through this,” Bastian said. “Masks and hygiene and distance are the keys. You see it around the world. It really is about people taking care of each other.”

Tweets by @forbesindia
Photo of the Day: Lights, Masks, Action
Jeff Bezos adds $13 bn to net worth in single day