Markets soar on news of China talks, but hopes for progress are low

The rally sent the S&P 500 up more than 1%, underscoring just how much financial markets are subsisting on hopes and fears about the trade war. But many in the U.S. and China see the best outcome as a continued stalemate that would prevent a collapse in relations before the 2020 election

By Ana Swanson and Matt Phillips 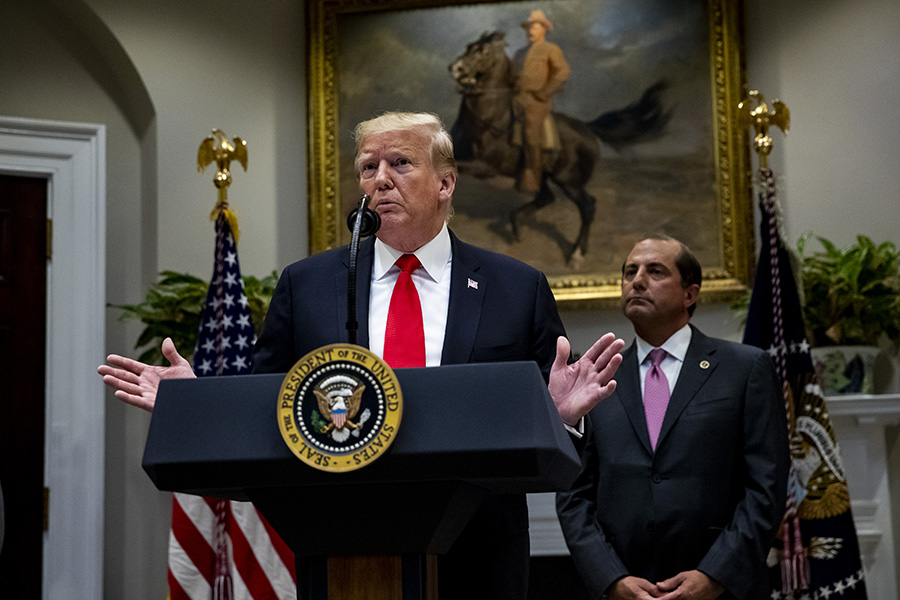 President Donald Trump speaks at an event on public health policy and combating the opioid epidemic, at the White House in Washington, Sept. 4, 2019. Trump’s decision to renew talks with China in the coming weeks sent financial markets soaring on Sept. 5, as investors seized on the development as a sign that both sides could still find a way out of an economically damaging trade war. (Anna Moneymaker/The New York Times)

WASHINGTON — President Donald Trump’s decision to renew talks with China in the coming weeks sent financial markets soaring on Thursday, as investors seized on the development as a sign that both sides could still find a way out of an economically damaging trade war.

The rally sent the S&P 500 up more than 1%, underscoring just how much financial markets are subsisting on hopes and fears about the trade war. Shares fell through most of August, as Trump escalated his fight with China and imposed more tariffs, only to snap back on Thursday after news of the talks.

But expectations for progress remain low, and many in the U.S. and China see the best outcome as a continued stalemate that would prevent a collapse in relations before the 2020 election. Both Trump and President Xi Jinping of China are under pressure from domestic audiences to stand tough, and the talks will happen after Trump’s next round of punishing tariffs take effect on Oct. 1.

“Continuing to talk soothes markets a little bit,” said Eswar Prasad, the former head of the China division at the International Monetary Fund. “But the political cost to making major concessions is, I think, too high for either side.”

The skepticism stems in part from what is emerging as a familiar pattern for Trump, for whom China is both a source of leverage and a potential vulnerability heading into an election year. The president has so far imposed tariffs on more than $350 billion worth of Chinese goods and routinely shifts from blasting China and threatening additional punishment to trying to calm the waters in the face of jittery markets and negative economic news.

Over two weeks, Trump has called Xi an enemy of America, ordered companies to stop doing business in China and suggested the United States was in no rush to reach a trade deal. On Sunday, he moved ahead with his threat to eventually tax every golf club, shoe and computer China sends into the United States, placing tariffs on another $112 billion of Chinese goods.

Stock investors have zeroed in on the threat the trade war poses to the economy, buying and selling in tandem with Trump’s trade whims. Thursday’s rally was the fifth positive performance for the market in the past six sessions. It brought the S&P 500 to within striking distance — less than 2% — of its high of 3,025.86, reached on July 26.

The coming weeks could result in more of the same, analysts say: tough words when the president wants to rally his base and a temporary cooling off when it seems to be hurting an economy that is one of his main arguments for reelection.

Trump and his advisers are wary of a potential challenge from Democrats who will try to paint the president as weak on China. Officials are cognizant that striking a deal based on the kind of limited concessions China is currently offering would most likely be a political liability in the president’s bid for reelection. Democrats, along with some Republicans, have previously accused Trump of buckling on China after he reached a deal that allowed ZTE, the Chinese telecom company, to avoid tough American punishment.

Yet as collateral damage from the trade war increases, Trump is facing pressure to relent. The bond market has been flashing warning signs of a potential recession, and both consumer confidence and the manufacturing sector have slowed.

The trade war is also clearly weighing on the Chinese economy, which is growing at its slowest pace in more than two decades. But China has responded defiantly, imposing retaliatory tariffs on $75 billion worth of American goods. The country is preparing to celebrate the 70th anniversary of its founding on Oct. 1, and analysts say Beijing would be unlikely to make concessions at such a politically delicate moment.

People familiar with Chinese economic policymaking have said in recent weeks that Chinese leaders remain interested in reaching a trade deal with the United States, but that they are wary of what appear to be ever-increasing demands from the U.S. and what they describe as frequent shifts in the American negotiating position.

The Chinese government continues to insist that it will not accept any agreement that is unequal, or that prevents it from pursuing economic policies that it needs for continued growth.

While both countries have motivation to come to an agreement, each is still insisting the other will be the first to bend.

“China and the US announced new round of trade talks and will work to make substantial progress,” Hu Xijin, the editor of the state-run The Global Times, wrote on Twitter. “Personally I think the US, worn out by the trade war, may no longer hope for crushing China’s will. There’s more possibility of a breakthrough between the two sides.”

The Trump administration’s position is that the agreement must change China’s behavior, and that there is limited room for compromise. “This president is not about half-measures,” Peter Navarro, one of Trump’s trade advisers, said in August on Fox Business. “He can’t meet the Chinese halfway on this, because if you meet them halfway, they’ll only be stealing half as much as they’re stealing and killing half as many of Americans.”

The world’s two largest economies are resuming talks after a charged few months in which the U.S. and China went from being on the cusp of a deal to a near-breakdown in relations.

Negotiators had almost finalized an agreement in April, and were openly talking about a meeting where their two leaders would sign the deal. But China suddenly backed away from measures that would require it to change its laws, and Trump accused Beijing of breaking the deal and moved ahead with lifting tariffs on the country.

The two sides again called a truce to escalating tensions in June, when Trump and Xi met personally in Osaka, Japan, during a Group of 20 summit. But the agreement quickly vanished. Trump grew frustrated with China’s failure to buy U.S. agricultural goods — something the Chinese said they had never agreed to — and moved to further expand his tariffs.

China’s biggest request in the trade talks had been rolling back Trump’s tariffs, but those levies are now higher than ever. And American suspicions of China’s willingness to hold to an agreement — mistrust that led the U.S. to insist on a complex enforcement mechanism and changes to Chinese law — have only grown.

Still, there is little downside for any party in favoring talks over action.

As long as the American economy remains strong, Trump appears to have more to lose politically by giving into a weak deal with the Chinese than he does in persisting with his current approach. He could gain even more leeway to keep things status quo this month if the Federal Reserve cuts interest rates again to help insulate the U.S. economy from the effects of a global slowdown and Trump’s trade war.

The Chinese are increasingly skeptical of the value of making further concessions, given their concern that Trump might go back on any deal he signs. But they have taken a pragmatic approach, “recognizing that openness to dialogue and engagement might not help much, but certainly cannot hurt,” Prasad said, adding, “There is still the hope that at least with further negotiations, at least even more trade and economic tensions can be staved off.”

For now, markets appear to be rewarding the promise to keep talking, even if hopes for an agreement are low.

The trade fight has clearly emerged as the top concern among investors this year. Some 51% of respondents to Bank of America Merrill Lynch’s monthly survey of global fund managers in August cited a worsening trade war as the top “tail risk” — a remote, but potentially deeply destabilizing threat — facing markets.

After a 1.8% drop in August, the recent rise has been a striking show of resilience. Annual expectations for corporate profit growth at S&P 500 companies have been falling for much of the year. The drop has been especially sharp for goods producing firms, as the global industrial economy has fallen into a slump many analysts have blamed on the trade war.

Still, stocks have managed to resume their climb, forcing some investors — particularly professionals whose performance is measured by how they stack up against important market indexes — to chase the rally.

“The narrative of ‘fear of missing out’ and ‘there is no alternative’ is resonating with investors,” said Ian Burdette, a senior managing director at brokerage firm Tribal Capital Markets. He added, “It seems significantly overdone, to me, from a fundamental perspective.”

Tweets by @forbes_india
I'm too old to be scared by much: Margaret Atwood on 'The Handmaid's Tale' sequel
At Saudi Aramco, changes at the top point to a coming IPO