Push to ban Netflix from Oscars? It's not that simple

The Spielberg vs. Netflix maelstrom became frenzied, particularly on Twitter, when reports surfaced that he planned to propose Oscar rule changes that would block films primarily distributed online 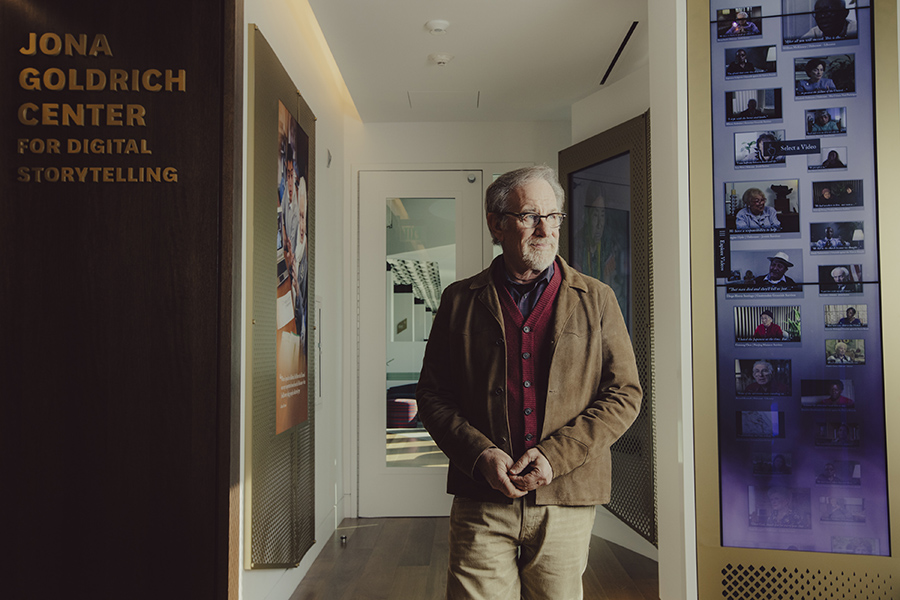 “I want people to find their entertainment in any form or fashion that suits them,” Steven Spielberg said. Image: Rozette Rago for The New York Times

LOS ANGELES — It has the makings of a great screenplay: As the future of an entire industry hangs in the balance, the ultimate establishment figure — a genius in his fourth decade of domination — goes to battle with a menacing interloper.
That hyperbolic story line has enveloped Steven Spielberg since early last month, when reports surfaced that he planned to propose Oscar rule changes that would block films that are primarily distributed online from competing. “Spielberg: Ban Netflix From Oscars” read one headline. Right now, the academy rules allow any film that plays for one week in a theater in Los Angeles to compete. They also allow for movies to be available for streaming at the same time that they’re playing in theaters. The Spielberg vs. Netflix maelstrom became so frenzied, particularly on Twitter, where the director was branded as an out-of-touch crank, that the Justice Department sent an unusual letter to the Academy of Motion Picture Arts and Sciences, warning that changes to its eligibility rules could raise antitrust concerns. Unbowed, according to some trade news outlets, Spielberg will propose his rule change at an Academy of Motion Picture Arts and Sciences board meeting Tuesday night in Beverly Hills. “The Spielberg-Netflix Showdown” is how IndieWire described the closed-door session in a preview article. There was just one catch. Spielberg, 72, did not attend the meeting, much less propose any rule changes. He was not even in town. His schedule had long called for him to be in New York, where rehearsals are underway for his next film project, a remake of “West Side Story,” according to a person who works for him, who spoke on the condition of anonymity to discuss his private itinerary. And the meeting proved to be anticlimactic, with the academy’s board of governors voting to maintain the current eligibility rules. In fact, Spielberg’s animosity toward Netflix appears to have been acutely overstated. Spielberg has been publicly silent through all of it. But inside his company, Amblin Entertainment, Spielberg has expressed frustration with the way his views about streaming have recently been characterized in the news media, according to two people close to him, who spoke on the condition of anonymity to maintain their relationship. Yes, he believes that theater owners, streaming services and traditional studios need to come together to figure out a way to protect what he likes to call the “motion picture theatrical art form.” If the academy were to come up with a reasonable way to ensure that only films with robust theatrical releases are eligible for Oscars, there is a strong chance he would vote for it, the people said. But a geriatric Luddite who wants to kill Netflix? His primary beef is not with Netflix, according to the people close to him. Rather, he is frustrated that exhibitors have been unwilling to compromise. The multiplex chains have fought off any effort to shorten the exclusive period they get to play films of any genre, which is currently about 90 days. In January, after “Roma” was nominated for the best picture Oscar, Spielberg even called AMC and Regal, the largest theater companies, and implored them to play the Netflix film even though it was already available online. They refused. “I want people to find their entertainment in any form or fashion that suits them,” Spielberg said in an email in response to queries from The New York Times. “Big screen, small screen — what really matters to me is a great story and everyone should have access to great stories. “However, I feel people need to have the opportunity to leave the safe and familiar of their lives and go to a place where they can sit in the company of others and have a shared experience — cry together, laugh together, be afraid together — so that when it’s over, they might feel a little less like strangers. I want to see the survival of movie theaters. I want the theatrical experience to remain relevant in our culture.” Could there soon come a day where popcorn movies like “Indiana Jones and the Kingdom of the Crystal Skull” arrive in theaters but more sober films like “Lincoln” go directly to a streaming service? It’s not a far-fetched concern given the film industry’s current trajectory. Moreover, some important new voices whose work has emerged on Netflix — Dee Rees (“Mudbound”), Cary Joji Fukunaga (“Beasts of No Nation”) — have had their films excluded from theaters because the streaming service and the multiplex chains have been at loggerheads. Asked at a recent convention for movie theater operators whether he would consider reducing the 90-day period of exclusivity for certain film genres, Adam Aron, the chief executive of AMC, responded by saying: “Shocking as it may be, it’s better not to have those negotiations in the pages of The New York Times. Having said that, AMC has a willingness to consider alternatives to the current status quo — if, and it’s a big if, underline it with a red Sharpie — any change would benefit the shareholders of AMC.” Netflix declined to comment for this article. The streaming company has generally resisted giving theaters any period of exclusivity, preferring to make films instantly available on its service worldwide. With “Roma” and a few other recent films, however, Netflix has softened its stance. “Roma” was offered to theaters under a three-week period of exclusivity, for instance. 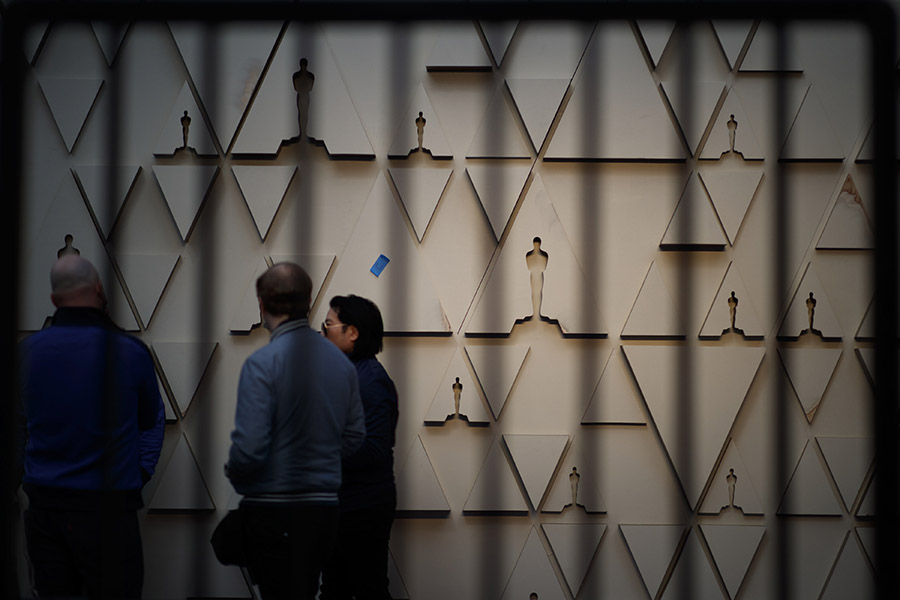 The Academy of Motion Picture Arts and Sciences, which awards the Oscars, held a board meeting on Tuesday night. Image:Patrick T. Fallon for The New York Times

Netflix may bend further for “The Irishman,” an expensive crime drama directed by Martin Scorsese that is scheduled to arrive in the fall. Variety reported April 16 that Netflix and theater chains had discussed an exclusive window in the 70-day range. Netflix is hoping to have a theatrical component for “The Irishman” nailed down by early summer. Even so, the Sturm und Drang around theatrical exhibition — essentially, what makes a movie a movie — is not likely to dissipate anytime soon. Emotions run very hot on this issue. Just look at the spot in which Spielberg has found himself. The Spielberg vs. Netflix narrative actually started in late February, when IndieWire reported that Spielberg was on a campaign to get the academy to revisit the eligibility of streaming-service movies for Oscars. The underpinning was a vague quote, credited to an Amblin spokesperson. That turned out to be Marvin Levy, a longtime press agent for Spielberg. Mainstream publications repeated and sharpened the report, prompting headlines around the globe. Because Spielberg chose not to clarify his position, the vacuum got filled with old quotes that supported the narrative — namely one from a press junket in Europe last year. “Once you commit to a television format, you’re a TV movie,” Spielberg said at the time. “You certainly, if it’s a good show, deserve an Emmy, but not an Oscar.” As criticism grew on social media, Jeffrey Katzenberg, one of Spielberg’s longtime associates, sought to lend a hand, telling a crowd at the South by Southwest festival in Texas that the director’s position had been misstated. “One, Steven didn’t say that, and two, he is not going to the academy in April with some sort of plan,” Katzenberg said. But an appearance by Spielberg at an Apple event in late March added fuel to the fire, with some accusing him of being hypocritical. One person who does not seem to be upset is Ted Sarandos, Netflix’s chief content officer. He and Spielberg had dinner a few weeks ago. And they were together as recently as Thursday at a Los Angeles shopping mall, where they took in a virtual-reality experience in which Spielberg is an investor.