Railway Minister Suresh Prabhu presented his 'Rail Budget 2016' in Lok Sabha on Thursday. Here are some of the reactions 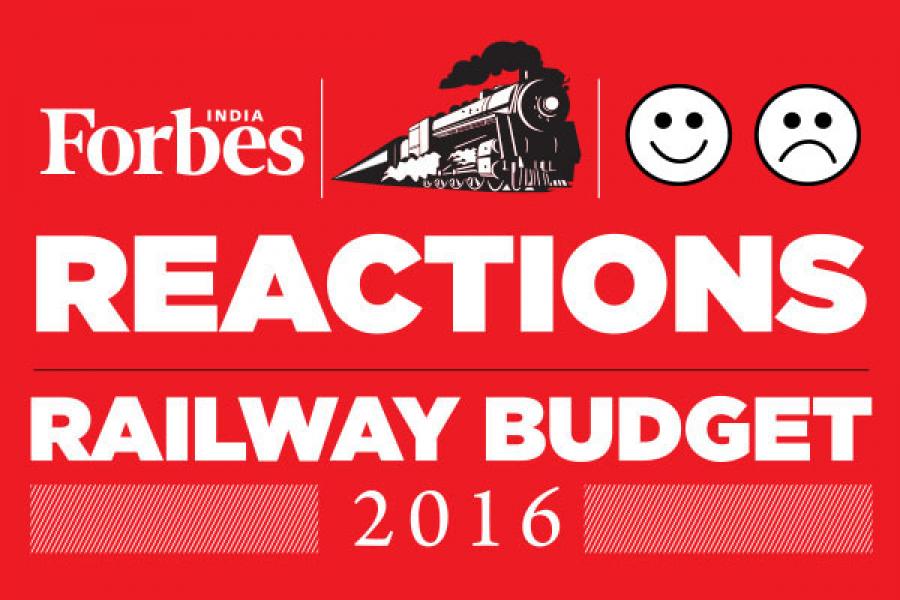 Railway Minister Suresh Prabhu presented his 'Rail Budget 2016' in Lok Sabha on Thursday. Here are some of the reactions:

"The budget comes out to be focused on consolidation rather than expansion. Therefore the budget has focused on key issues plaguing the railways which are customer experience, increasing efficiency, network decongestion, improving safety, improving stations, increasing revenues and increasing availability. It also gave a push to projects that will lay the foundation of next generation railways, which is primarily High Speed Railway, popularly referred to as bullet trains. Overall a mature rail budget that balances much needed investments with the revenue and funding constraints"

"The railway budget has maintained the consistent path of railway reform and the measures announced can change the way freight logistics happen in India."

"The decline in operating ratio from 88% to 90%, and to 92% for next year is along expected lines, with freight and passenger traffic remaining nearly flat, and expenses continuing to increase. In this context, how the increased investment target of Rs 1.2 lakh crore will be met, becomes more pertinent. In fact, for the five year target of Rs 8.5 lakh crore, set last year, the annual spends will need to continue to grow faster.

There is a reason to be optimistic. Several steps have been taken to speed up contracting and execution of contracts, and construction companies are already seeing their order books grow. Private Freight Terminals are growing, and the award of Madhepura and Marhowra manufacturing projects, are signs of progress. However, the port connectivity projects, JVs with State Govts and 4 BOT Annuity projects, remain work-in-progress. That new project announcements are limited indicates adherence to implementation focus, highlighted in the previous Budget. Among the new announcements, East coast connectivity through Dedicated Freight Corridor is perhaps the most impactful, as it would contribute to India participating in global production networks in south east Asia, and to Make in India.

The proposed rationalisation of freight tariffs will be critical to improving financial health, and enabling investments. Railways have become less competitive than road even for 1200 – 1500 km distances for container movements. Coastal shipping and Inland waterways are also emerging as competition. A more pragmatic approach to freight, combining several measures like personalised service and bulk discounts, would be necessary. Commissioning of the dedicated freight corridors will take a few years; some reprioritisation of track access would be required in the meanwhile to enable time-tabled freight operations.

Several reform measures remain on the agenda, though timeframe for their implementation is still unclear. These include setting up of an independent regulator through legislation, organisational restructuring (including enabling separate focus on suburban rail), large scale use of PPP’s, and successful monetisation of land and commercial assets. Speedier implementation of these is necessary to achieving the five year vision."

- Manish Agarwal, Partner and Leader - Infrastructure, PwC India
The Rail Minister has done a fine job in setting achievable targets for FY17 keeping in mind the ground realities of the present times. He has rightly addressed the key issues like modernization, capacity augmentation, better governance, enhancement of customer experience, human resource development and at the same time readying Indian Railways for the future. In fact. what I found most impressive is the Minister's shift of focus from 'completion' to 'commissioning' of rail projects.

In particular, I liked the Minister's intention to raise the revenues earned from freight handling through his 3-pronged approach of expansion of freight basket, rationalization of tariff structure and improvement and enhancement of terminal capacity. Incentivising containerisation of freight traffic is a step in the right direction as is the proposed move to enter into long-term tariff contracts with key customers. Setting up of logistics parks and warehouses under PPP mode will perfectly dovetail into this process. In addition, the steps announced towards development of rail infrastructure – be it development of stations, or creation of 3 new Dedicated Freight Corridors (DFCs), or improving coastal connectivity and port connectivity, or track upgradation – are steps which will be instrumental in providing a fillip to the "Make In India" programme. The Rail Minister has deftly interwoven these projects for the greater good of the economy and to enhance capacity creation.

Allowing IR to procure power directly from power distribution companies, grid and power producers has been one of the proposals which we had made to the government as this would enable IR to procure power at reasonable costs. I am very pleased to see this featuring in the budget because this is a win-win proposition resulting in substantial savings for IR while benefitting the power producers as well.

Tweets by @forbes_india
Free Basics: Finally, a Winner (and a Loser)
Budget 2016: Will the government solve the MAT conundrum?