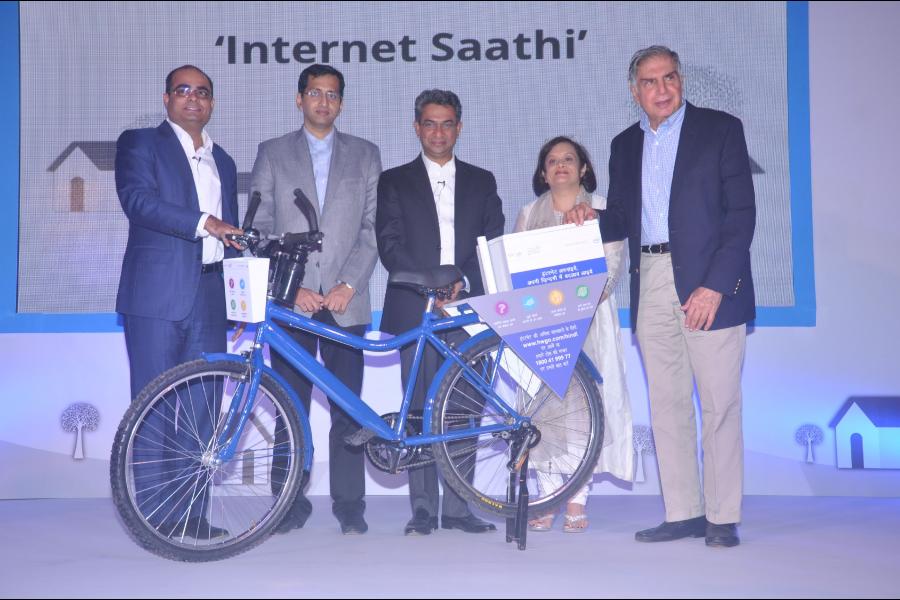 Tata Trusts partner Google India to Launch 'Internet Saathi'(L-R) Mr. Sandeep Menon, Mr. R. Venkataramanan, Mr. Rajan Anandan, Ms. Debjani Ghosh, Mr. Ratan Tata
Google India, in partnership with Tata Trust—a “non-sectarian philanthropic organisation” of the Tata Group—today announced the launch of an initiative named ‘Internet Saathi’. The programme aims to impart Internet literacy to women in rural India and help them use the technology in their daily lives.
Elaborating on the need for such an initiative, Ratan Tata, chairman, Tata Trusts, said: “Today, there is an urge among Indians to be a part of the world that is today, not a world that was yesterday. Google has digitised the world and it’s a privilege to work with them to bring more women online.”

Rajan Anandan, VP and MD of Google Southeast Asia and India, said, “India has 300 million (Internet) users, the second largest in the world, and 6-7 million users are being added each month. While around half of the women in urban India can use the Internet, only 12% of rural women have knowledge of the Internet.” With this joint venture, Anandan hopes to provide easy access and digital education to women in rural India.

The programme will employ 1,000 specially designed ‘Internet cycle carts’, installed with a waterproof box and a portable charger for the digital devices. The cycle carts will travel from village to village, providing training on Internet usage. “The cycles will stay in the villages for a few weeks, until the women there become self-sufficient (in using the Internet),” said Sandeep Menon, chief marketing officer, Google India. He added the idea is to teach the basic aspects of the Internet, and stimulate interest and demand, after which the women will find their own ways to log on to the World Wide Web.

Debjani Ghosh, vice-president SMG, MD-South Asia, Intel said: “Digitising cannot happen through Powerpoint presentations, but only through such on-ground initiatives. We will be glad if more companies start such initiatives or join us.”

Despite the ingenuity of the programme, concerns over its limitations abound. First, the initiative does not focus on illiterates, severely curtailing the participation of a large part of rural India. There are also questions on whether the women will be able to continue accessing the Internet after being initiated into it by the programme.

However, Google’s Menon assures, “Without doubt, once [these women] take their first steps they will continue to use the Internet.”  R Venkataramanan, executive trustee of Tata Trusts suggested that various government and community services would be able to provide them with Internet access. Menon said that Internet -enabled phones available for Rs 3,000 with monthly service charges of Rs 200 for full data would make Internet access affordable for “millions and millions”.

The Internet Saathi initiative comes amid the launch of Prime Minister Narendra Modi’s Digital India campaign and will kick off from Gujarat, Rajasthan and Jharkhand before being gradually rolled out across India. The aim is to reach 4,500 villages and 5,00,000 women by the end of 2016.