The man with 17,700 bottles of hand sanitizer just donated them

On Sunday morning, Matt Colvin, an Amazon seller outside Chattanooga, Tennessee, helped volunteers from a local church load two-thirds of his stockpile of hand sanitizer and antibacterial wipes into a box truck for the church to distribute to people in need 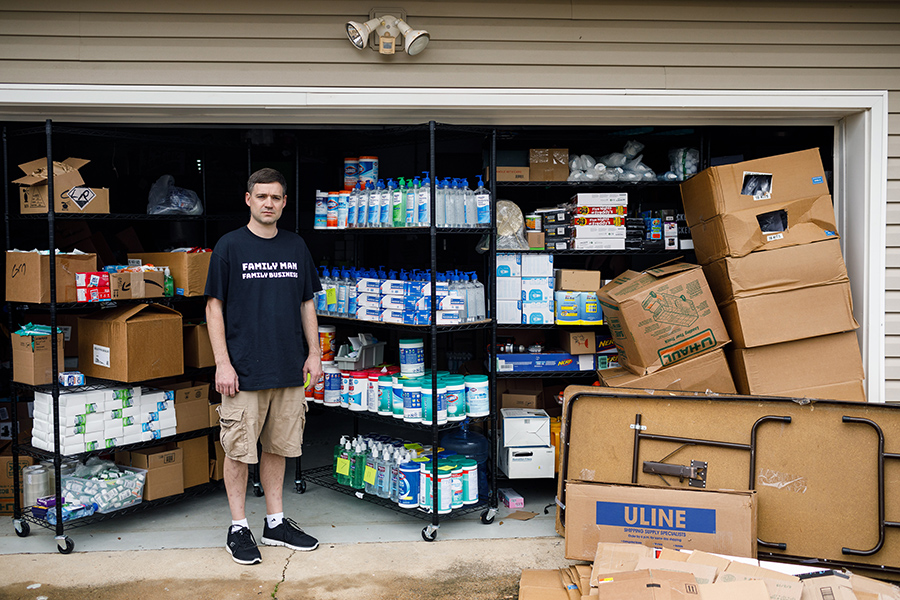 Matt Colvin with his stock of hand sanitizer and other supplies in demand due to coronavirus concerns that he was selling online until Amazon and other sites started cracking down on price gouging, at his home in Hixson, Tenn., March 12, 2020. Sites like Amazon and eBay have given rise to a growing industry of independent sellers who snatch up discounted or hard-to-find items in stores to post online and sell around the world. (Doug Strickland/The New York Times)

A Tennessee man who became a subject of national scorn after stockpiling 17,700 bottles of hand sanitizer donated all of the supplies Sunday just as the Tennessee attorney general’s office began investigating him for price gouging.

On Sunday morning, Matt Colvin, an Amazon seller outside Chattanooga, Tennessee, helped volunteers from a local church load two-thirds of his stockpile of hand sanitizer and antibacterial wipes into a box truck for the church to distribute to people in need.

Officials from the Tennessee attorney general’s office Sunday took the other third, which they plan to give to their counterparts in Kentucky for distribution. (Colvin and his brother Noah bought some of the supplies in Kentucky this month.)

The donations capped a tumultuous 24 hours for Colvin. On Saturday morning, The New York Times published an article about how he and his brother cleaned out stores of sanitizer and wipes in an attempt to profit off the public’s panic over the coronavirus pandemic. Colvin sold 300 bottles of hand sanitizer at a markup on Amazon before the company removed his listings and warned sellers they would be suspended for price gouging.

As a result, Colvin was sitting on an enormous cache of sanitizer and wipes while much of the country searched in vain for them.

The article immediately igniteded widespread outrage, with thousands of people posting angry comments across the internet about his actions.

Many of those people also contacted Colvin directly with hate mail and death threats, while one man even banged on the door at his home late Saturday night, according to Colvin and several messages he shared with The Times.

In an hourlong interview Sunday, Colvin expressed remorse for his actions and said that when he decided to hoard the sanitizer and wipes, he didn’t realize the gravity of the coronavirus outbreak or the severe shortage of sanitizer and wipes. 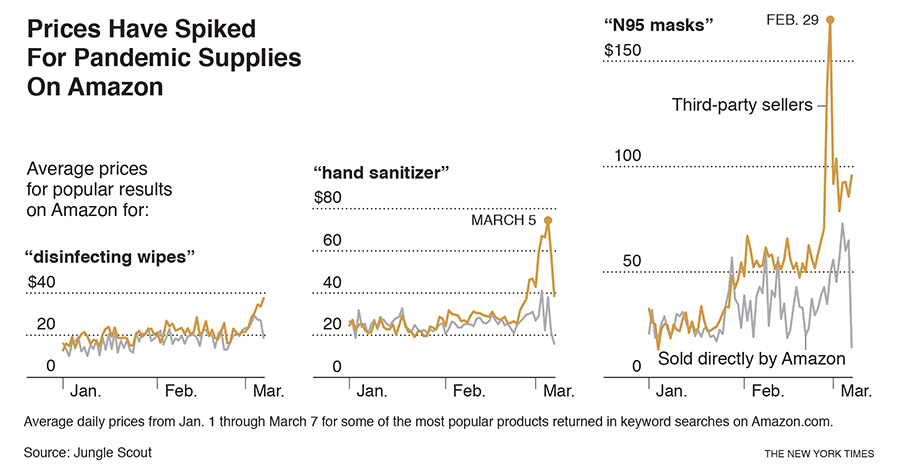 Sites like Amazon and eBay have given rise to a growing industry of independent sellers who snatch up discounted or hard-to-find items in stores to post online and sell around the world.

“I’ve been buying and selling things for 10 years now. There’s been hot product after hot product. But the thing is, there’s always another one on the shelf,” he said. “When we did this trip, I had no idea that these stores wouldn’t be able to get replenished.”

He said the outpouring of hate has been scary for him and his family. He said people have incessantly called his cellphone, posted his address online and sent pizzas to his home. His inbox was flooded with ugly messages, he said. One email he shared with The Times said: “Your behavior is probably going to end up with someone killing you and your wife and your children.”

“It was never my intention to keep necessary medical supplies out of the hands of people who needed them,” he said, crying. “That’s not who I am as a person. And all I’ve been told for the last 48 hours is how much of that person I am.”

Now Colvin is facing consequences. On Sunday, Amazon and eBay suspended him as a seller, which is how he has made his living for years. The company where he rented a storage unit kicked him out. And the Tennessee attorney general’s office sent him a cease-and-desist letter and opened an investigation.

“We will not tolerate price gouging in this time of exceptional need, and we will take aggressive action to stop it,” Attorney General Herbert H. Slatery III of Tennessee said in a news release.

Tennessee’s price-gouging law prohibits charging “grossly excessive” prices for a variety of items, including food, gas and medical supplies, after the governor declares a state of emergency. The state can fine people up to $1,000 a violation.

The language of the law could benefit Colvin. Gov. Bill Lee of Tennessee declared a state of emergency on March 12, activating the price-gouging law. The Colvin brothers bought all of the sanitizer and wipes in question before that date, and Colvin said he did not sell anything after it.

A spokeswoman for the Tennessee attorney general’s office said that even if the Colvin brothers did not buy or sell any of the supplies after March 12, state authorities “will weigh all options under consumer laws.”

Tweets by @forbes_india
When Facebook is more trustworthy than the President
Kapil Dev to Prakash Padukone: Meet India's first gamechangers