Violent August: Shootings double, and murder is up by 50% in NYC

The data released on Wednesday reflected a trend many cities across the US are experiencing in a year already marked by a pandemic and civil unrest: a new surge in crime that has public officials grasping for explanations and scrambling to respond 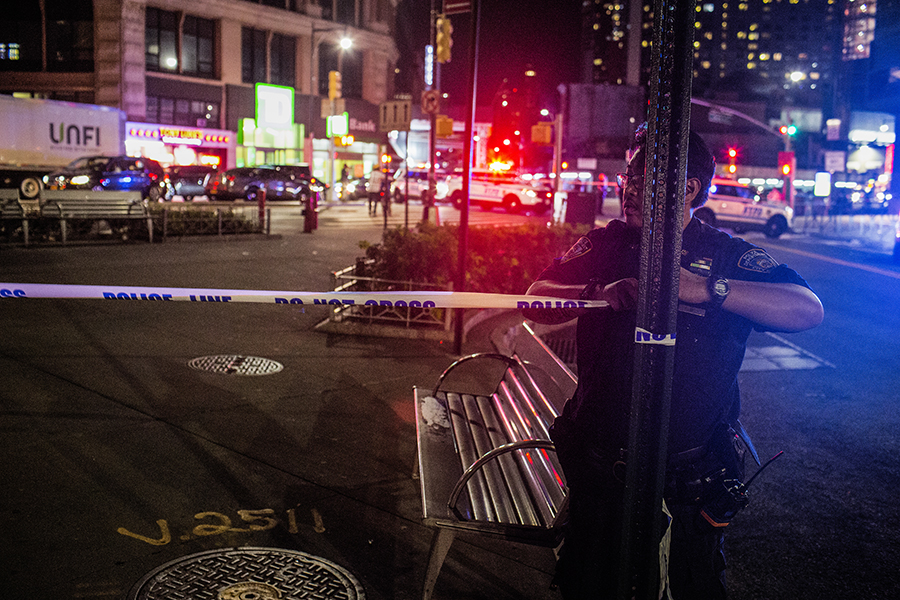 BROOKLYN, NEW YORK - AUGUST 20: New York City police officers secure and investigate a shooting scene on August 20, 2020 in downtown Brooklyn, New York. Two men got into a fight and both pulled out guns, with one being critically wounded with a gun shot wound to the head. New York City, and Brooklyn in particular, has seen a dramatic increase in gun violence this summer. Image: Andrew Lichtenstein/Corbis via Getty Images

NEW YORK — The steep rise in gun violence that has rattled New York City and intensified the debate over policing continued at an alarming rate in August, as shootings more than doubled over the same period last year and murders rose by nearly 50%, the Police Department said. The data released on Wednesday reflected a trend many cities across the country are experiencing in a year already marked by a pandemic and civil unrest: a new surge in shootings, murders and other crimes that has public officials grasping for explanations and scrambling to respond. The uptick has been seized upon by President Donald Trump, who has tried to shift the public’s attention away from his response to the pandemic to what he depicts is out-of-control crime in New York City and other urban areas. He has tried to blame the rise in violence on local Democratic leaders. Violent crime always rises in the summer, but this year has been extreme in New York. Since May, the city has recorded 791 shootings, a more than 140% increase over the same period in 2019. The 180 murders seen between May and August are a more than 51% increase compared to 2019. In August alone, there were 242 shootings in the city, compared with 91 last year, and the number of murders rose from 36 to 53. As a result, the city surpassed 1,000 shootings before Labor Day, making it the worst year for gun violence since 2015, with four months left to go. Still, this year’s numbers are far lower than the peak levels of crime seen in the 1980s and 1990s, and the recent rise in shootings and murders come after years in which the city saw violent crime drop to low levels not seen since the 1950s. Drops in reports of rape and grand larceny have helped keep the overall crime rate this year mostly flat. That rate includes tallies for seven major crimes: murder, rape, robbery, assault, burglary, grand larceny and car theft. Still, the toll from shootings has been heavy. In August, the people who died from gun violence, included: the caretaker of a church in Brooklyn, who was shot inside the church; a mother shot in the back of the head in front of a school in the Bronx; and a man struck by a stray bullet in Brooklyn while he was playing handball. Asked on Wednesday about the spike in shootings, Mayor Bill de Blasio said the city was dealing with a “perfect storm” and suggested that the pandemic was in part to blame. But he said that the hardship was temporary because a coronavirus vaccine would be developed. “We know that with the entire society on hold for months all sorts of things got set in motion that were truly unusual,” he said. Experts on crime say it is impossible to point to a single explanation for the violence. The surge in crime has come during the coronavirus pandemic, an economic downturn and widespread protests against police brutality. Despite the surge in gun violence, police data shows that arrest numbers have declined significantly over the summer while response times to 911 calls have risen sharply. That has prompted some elected officials to call for an investigation into whether rank-and-file police officers are staging a work slowdown in response to the protests over police brutality and criminal justice reforms passed after the death of George Floyd in Minneapolis. But police officials have challenged that idea, asserting instead that their resources were stretched thin as they have struggled to address other demands, including policing the protests. The department’s ranks have also been thinned by recent budget cuts and a wave of retirements, leaving commanders scrambling to cover neighborhoods where violence is on the rise, police officials said. “Obviously in June our cops were very occupied with the protests throughout the city,” Chief Terence Monahan, the highest ranking uniformed officer in the department, said in an interview Wednesday. As a result, he said, shootings “started to climb up” in pockets left unguarded. The pandemic has also played a role, the chief said. Feuds have festered in communities where rival gangs cannot escape each other’s presence, fueling a cycle of violence, he said. “So we are seeing larger and larger crowds standing outside their buildings, hundreds, if not more, together and disputes occur,” he said. “And that’s when someone pulls out a gun and starts shooting and that one shooting may begin another five or six, because of the revenge that takes place after that.” John Pfaff, a law professor at Fordham University who has been scrutinizing crime statistics, said that crime in the city had reached historically low levels, making the current rise seem large in percentage terms. “The percent change numbers look shocking because we’re doing so well, not necessarily because we’re doing so poorly,” he said. He said that this year’s protests and the pandemic’s economic, social and emotional disruption could be heavily influencing the spike in crime, but much remains unclear. “How much of that is COVID? How much of that is social unrest? How much of that is the policing response to that?” he said. “At this point it’s far, far too early to really be able to say.”