Vodafone to launch 4G services in five circles in 2015

Its FY15 revenue rose by 12.6%, and it added 17.2 million new subscribers during this period 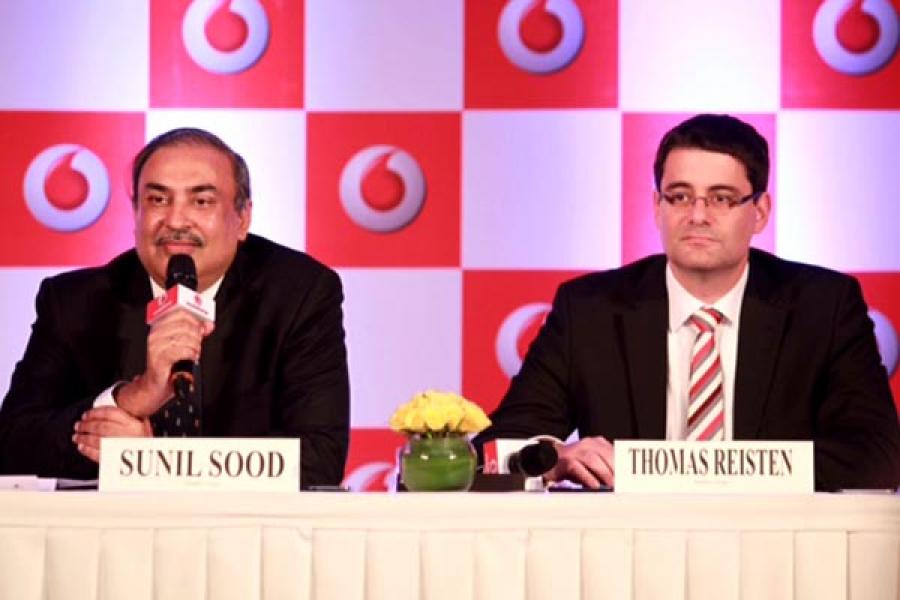 Sunil Sood, managing director and CEO, Vodafone India, at the announcement of FY15 results in Delhi, on May 19. When asked whether 'Acche din' will arrive, he said: "Insha Allah".

India’s second-largest mobile phone service provider, Vodafone India, will roll out fourth generation (4G) services in select towns in the second half of this year. In the February auctions, Vodafone won spectrum of 5 MHz or more in the 1,800 MHz band in five circles—Delhi, Mumbai, Kolkata, Karnataka and Kerala. “We are conducting trials right now,” said Sunil Sood, managing director and CEO, Vodafone India Ltd, at a press conference where he announced the company's results for FY15. “We have 4G spectrum only in five circles, so our launch will be in these circles.”

Vodafone’s announcement comes close on the heels of the telecom arm of Reliance Industries Limited, Reliance Jio Infocomm, signing a pact with Chinese firm Huawei for sourcing 4G devices. Reliance Jio has earlier said it will launch 4G services this year in 22 circles, including 5,000 towns and cities.

In FY15 Vodafone India expanded its 3G services from nine to 16 circles, representing 88 percent of its service revenues; it also invested Rs 8,598 crore in network expansion. The company ended FY15 with Rs 42,352 crore in service revenue, an increase of 12.6 percent over FY14. Sood said earnings were driven by customer additions and growth in data revenue. Vodafone India now has 183.8 million subscribers, adding 17.2 million during the past year. Its Ebitda margin for the year was 29.6 percent.

In March, Vodafone India announced a fresh equity infusion of Rs 6,000 crore. “We have contributed more than Rs 90,000 crore till now to the [government] exchequer,” said Sood.

When asked on expectations from the NDA government, Sood said they would like to see the government move faster on policy matters: “As businessmen we are always in a hurry.” He added that the government should give a clear framework on when auctions will take place, “so that we can offer high speed broadband services because some of the applications will require this in the future.”

Sood reaffirmed Vodafone’s stand on net neutrality. “We are completely pro choice and for net neutrality. The customer has the right to choose which applications or websites he wants to use,” he said. In response to a question on ‘zero rating’ plans, he said it is a trivial matter. “It is just a price plan to encourage customers to use data plans. We have not offered it. We will take a look at it once the government comes out with rules on it.”