Spurred by millennials who flaunt their love for sweet innovation on social media, a bunch of businesspeople are pushing the envelope for what constitutes dessert 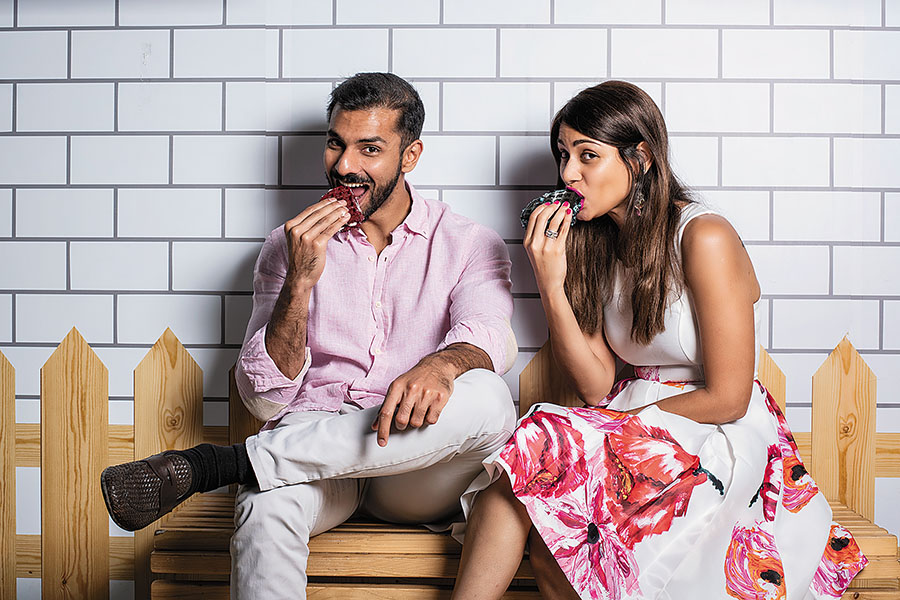 Shrey Aggarwal and Alisha Shirodkar, founders of The Belgian Waffle Co, have 200-plus stores in over 55 cities in India

The sweet tooth craves more than just desserts. That has been the learning of a bunch of businesspeople who started with a specialised item, but have since diversified their offerings with other varieties while retaining their core focus. This is largely because of millennials who flaunt their love for waffles, pancakes, cheesecakes and churros on social media.

Vikesh Shah, for instance, discovered pancakes during a visit to Europe with friend Dev Kapadia in 2017. They founded 99 Pancakes after their return the same year. “We’re the first to introduce mini Dutch pancakes in India, also known as poffertjes globally. I wasn’t sure if it will work in India, but I took a chance and opened our first store in Kala Ghoda, Mumbai. There were no plans to expand then,” claims Shah. Today, 99 Pancakes has 65 outlets across India.

It wasn’t smooth sailing to begin with. Customers would come asking for cakes instead of pancakes. “We then started giving free samples; word-of-mouth played an important role in attracting customers,” says Kapadia, who is country head of 99 Pancakes.

Shah also runs a 15-year-old family-owned bakery Happiness Deli, which serves cakes, pastries and pizza. Similarly, Kapadia and he plan to add savoury items to 99 Pancakes’ menu as they feel it is difficult to sustain the business only on desserts. Recently, 99 Pancakes introduced Procakes—a protein pancake with chia seeds, peanut butter, yogurt, nuts and berries.

99 Pancakes sells 8,000 dishes of pancakes every day with each box containing 12 pieces. The company’s revenues jumped from ₹3 crore in 2017-18 to ₹10 crore in 2018-19, with 50 percent of them coming from orders via online aggregators. “We’re planning to expand to Nepal, Sri Lanka and Thailand, and aim to have over 100 stores in two years,” says Kapadia.

Like pancakes, waffles became a cherished dessert around 2015 when The Belgian Waffle Co came to India. Founded by Shrey Aggarwal and Alisha Shirodkar, it began as a small kiosk at Inox Cinemas, Nariman Point in Mumbai, and today boasts of 200-plus stores in over 55 cities in India. A mechanical engineer, Aggarwal was working for SAP, an ERP software firm, in Manila, Philippines, from 2013-15 and had no intention of entering the food industry. “When I was walking in a mall in Manila, I smelt freshly-baked waffles and decided to try them. They were amazing and I thought there was great potential to bring them to India,” he says.

The Belgian Waffle Co serves eggless waffles which are prepared in front of the customer. In three years, Aggarwal and Shirdokar plan to have 500 outlets and expand to foreign countries. It is currently present in Nepal and Dubai. The company has a turnover of ₹100 crore and sells 25,000 waffles per day. Sixty percent of the business is from its stores.

It took the duo a while to educate Indian customers about waffles. “We built brand engagement through digital mediums and created an understanding of the USPs of the ‘waffwich’, a term coined by us. We tried to explain waffle as a freshly-baked eggless product with fillings packed in a portable format,” explains Shirodkar. The company recently introduced mini pancakes in its menu, which also has shakes, coolers and smoothies. “We don’t plan to add savoury items. We’d rather innovate with waffles. We don’t want to confuse our customers by serving them everything… we’ll stick to our forté,” says Aggarwal.

Shah of 99 Pancakes, however, has a different take. “The dessert industry is a limited space and one can’t work too much around products, so we plan to have savoury items like pizza as well.”

Similarly, celebrity chef Pooja Dhingra started with only desserts in 2010, but expanded to a café three years ago. This is despite the fact that over 65 percent of her revenue comes from desserts. “One thing that annoyed me was that you had menus that were 100 pages long. How can one place do so many things well? I wanted to keep limited items. A cafe was always in the pipeline; it was a natural progression. It just happened,” says Dhingra, founder of Le 15 Patisserie, who opened her first café in Colaba and later in Goregaon. Le 15 also delivers macaroons in 10 cities and they account for 45 percent of the business.

Dhingra was only 23 when she started Le 15 Patisserie after dropping out of law school. While pursuing her diploma in French pastry from Le Cordon Bleu culinary school in Paris, she tasted her first macaroon and decided to introduce it in her home country. “I always grew up eating cakes and pastries and never had or saw macaroons in India. After returning from Paris, I started practising making macaroons at home, and after a lot of trial and error, I opened Le 15,” says Dhingra.

Le 15’s revenue has grown by 525 percent since it was founded, claims Dhingra. It serves cupcakes, tarts, pasteries, eclairs, cakes and macaroons as desserts while the café offers waffles for breakfast apart from salads, burgers, hot beverages and more. 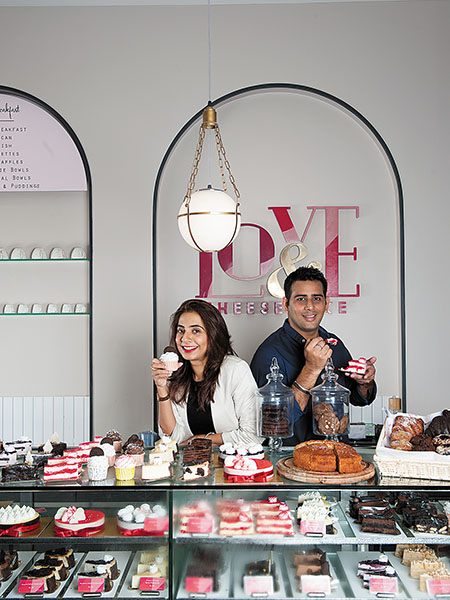 West-inspired changing eating habits have encouraged Indian entrepreneurs to introduce new delicacies which were traditionally alien to the public. For instance, Love & Cheesecake, founded by Ruchyeta Bhatia and chef Amit Sharma as a 300 square feet trial kitchen in 2012, sells 7,000 pieces of cheesecakes a day. “When we started, I didn’t have my own house, so I used to sleep in the same kitchen. One day, I started getting calls, saying I need five slices, 10 slices… we wondered how it happened. Later, we figured out that a journalist wrote about us,” says Sharma, who has worked with the ITC, Taj and Marriott group of hotels.

Love & Cheesecake provides 45 natural flavours of cheesecakes, cakes and confectionary. It claims to be the only dessert café in Mumbai that uses pure Italian dessert cheese over cheaper whipped cream alternatives. “In the first 12 months, Amit and I played every role: Baker, cashier, delivery boy, marketer, head-sales, vendor management etc. It helped us build a solid foundation,” says Bhatia, who previously worked with Ogilvy. “I always wanted to do something in the F&B space and when a close friend commented about the lack of a good dessert brand in Mumbai, I took notice. I remember us ordering birthday cakes from five-star hotels that would balk at any customisation requests, had a limited selection and wouldn’t care to deliver. That was the inception of Love & Cheesecake. We set out to build a great selection of desserts with anytime-anywhere delivery and free customisation,” says Bhatia. In 2016, Love & Cheesecake widened its reach with ‘Poetry’, a café and full-service restaurant. The café has a special breakfast menu, specially brewed coffee, cold pressed juices, salads, sandwiches, pancakes, waffles, desserts and more.

“We have five restaurants and two dessert-only outlets. We hope to expand more in Mumbai and launch in a couple of other cities next year. But we cannot let customer experience suffer, so we’ll do it purposefully,” explains Bhatia.

Lokesh Bharwani brought America’s popular snack to India with his venture Mad Over Donuts (MOD) in 2008. “The journey began much before the store, with hundreds of trials with top bakery chefs from Asia for over a year to perfect the eggless recipe of our donuts,” says Tarak Bhattacharya, MOD’s CEO.

He believes that donuts will remain the key offering despite diversification. “Once a brand is built and trust developed, diversification is possible, but not by downplaying the core product. When we launched, we only served donuts. Beverages were added later as they went hand-in-hand with donuts,” says Bhattacharya. “Over the years we have extended our menu to include other variants of donuts such as Bites, Signature Bites, savoury donuts, Box of Happiness and other complementary offerings such as waffles and éclairs.” The outlets also serve tea, coffee and milkshakes. MOD has over 60 stores in India and plans to open more in the coming years. “We sell an average of 25,000 donuts a day. To date, we have sold over 50 million,” claims Bhattacharya.

Churros, the culinary legacy of Spain and Portugal, have also become popular in India. In 2017, three friends founded The Bombay Churros with an initial investment of ₹25 lakh. It began with two outlets in the first year, before adding eight in the next. “Before The Bombay Churros, we had our own small café that didn’t last long. But with its experience, we decided to launch an exclusive dessert place which only serves churros. We were taking a huge risk, but were confident about our product… we knew the customers will love it even though there was limited awareness,” says co-founder Punit Ghadge, who launched The Bombay Churros with Nikkhil Borkar and Nitesh Oza.

“Today the average sale per outlet is approximately ₹4-6.5 lakh per month, and we’re present in Mumbai, Ahmedabad, Baroda, Goa, Nagpur, Chennai and Hyderabad,” says Borkar. The churros are available in three varieties—glazed, classic and churros sundae, which comes with dips and nine toppings.

“Recently, we added pastas and beverages on the menu, but 80 percent of our revenue is from churros. We’ll also have savoury churros in different flavours,” says Ghadge. Currently they sell 1,200 churros per day and plan to open outlets in Delhi, Bengaluru, Sri Lanka and Nepal.

“Dessert is a deep line in itself. Great quality, good ambience and even just one signature dessert for which people will travel long distances are enough to build a deep dessert brand,” says brand strategy specialist Harish Bijoor.

The proof of the dessert, after all, is in the eating.