Tycoons of Tomorrow talk about their strategies, beliefs and learnings 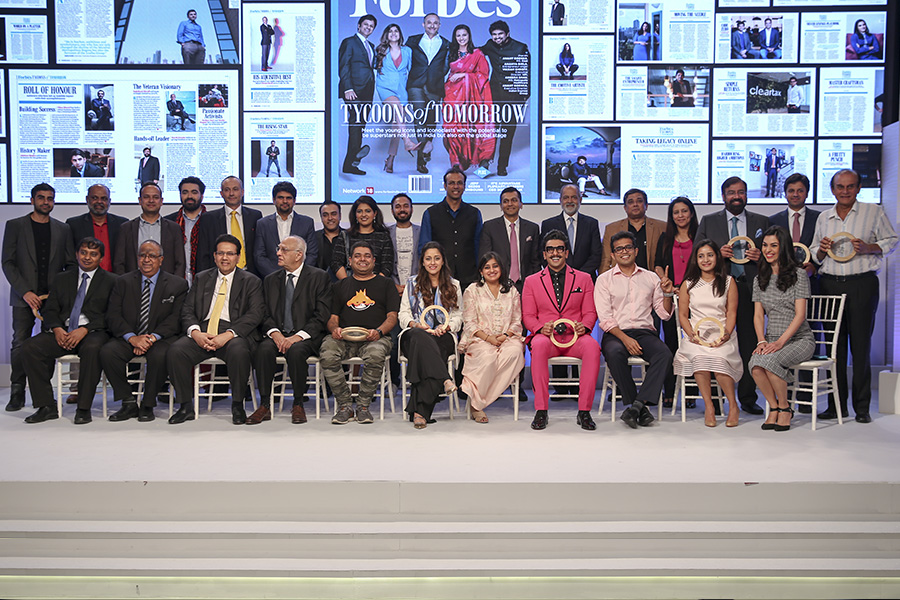 Listees of Tycoons of Tomorrow
India’s most promising young leaders from the fields of business, sports and entertainment industries gathered at the inaugural Forbes India 2018 Tycoons of Tomorrow event on Tuesday evening, captivating the audience with glimpses into their inspirational personal and corporate journeys.

India is transitioning from the world of family legacy-led manufacturing businesses to the world of startups, led by transformational informational technology. Both first and generation next entrepreneurs were at various panel discussions to respond to a volley of questions which ranged from their personal ambitions, leadership traits learnt, how they have marched ahead with dogged vision, unlearning and learning from their mistakes and peeping into the future.

The Forbes India Tycoons of Tomorrow list included over 20 listees and there were additional special citations for some of India’s top business families, for their contribution towards creating jobs and businesses.

Speaking to CNBC-TV18’s managing editor Shereen Bhan, in a discussion on ‘Building India’s Tomorrow’ Karan Adani CEO of Adani Ports and Special Economic Zone disclosed that one of the best strategies was to “work with the old guard but alongside try and drive what you believe, forward.”

Ashni Biyani, managing director of Future Consumer and daughter of Kishore Biyani, at the same discussion, disclosed her learnings from working with the previous generation of businessmen. “As a group we did too many things…we should know when it is too much more [of things],” she told Bhan, at the event.

Anant Goenka, executive director, Indian Express Group, who is driving digital businesses in the family-led newspaper publishing group said, “The media industry makes you a professional bad businessman; media is a tough business…it is very difficult to be ethical, value driven and yet be profit driven as well.” Goenka said that the Indian Express Group is firmly on its drive to become multi-format, multi-language and multi-market, with various new video and audio platforms across different languages.

The entertainment industry has not been blinkered to change, with challenges from various digital platforms changing the way people view films and its content. Rajiv Masand, entertainment editor, CNN News18 spoke to new-age actors Bhumi Pednekar and Vicky Kaushal. Kaushal said that “Society and peoples lifestyles was starting to change the way they viewed cinema.” Pednekar agreed and both said that they would work towards cinema which left a legacy and was built from 10 percent commitment.

Actress Rani Mukherji won the Icon of Cinema citation and spoke about the rationale into staying more relevant to changing audience tastes, through her roles in Mardaani in 2014 and in Hichki this year.

Two of India’s brightest young sports personalities and both Olympian champions, professional shooter Abhinav Bhindra and badminton star PV Sindhu spoke to Network18’s Group editor (sports) Gaurav Kalra at a panel discussion. “We have to make ourselves believe that we are great and we have to tell ourselves that everything will work out,” said Bindra, at the event. Bindra was talking about the pressure of expectations that keep mounting on athletes immediately after they achieve a remarkable feat.

PV Sindhu, speaking about dealing with the pressures to succeed each day, said: “The confidence comes from self-belief. All an athlete worth their salt needs to do is give every contest their best shot, without worrying much about the outcome. For me, I believe in myself.”

The event closed with a fireside chat with the ever lively Ranveer Singh, who spoke to CNN’s Masand. Going with the underlying theme of how the Generation Next would make their own space and even kick out the old guard, Singh said this may not happen too soon. “The reason they are there [referring to the Khans and Akshay Khanna of Bollywood] is that they are sincere, know what kind of films they want to do and are masters at their work”. Discussing his role of Alauddin Khilji in epic period drama Padmavat in 2018, he disclosed that there were days when he was almost “dancing with the devil” to evoke the role realistically through his dark and negative experiences.