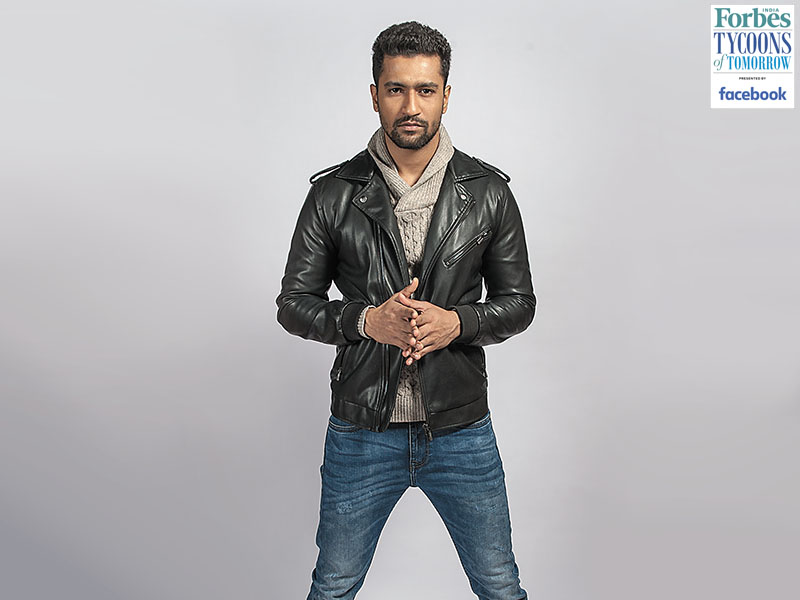 Vicky Kaushal hit a purple patch in 2018 with five releases during the year, all of which only enhanced his reputation as a power-packed performer. The success of films like Raazi and Sanju at the box office, and his presence in two Netflix films, Love Per Square Foot and Lust Stories, meant that his craft was appreciated by a diverse set of audience. As he basks in the glory of his latest movie, Manmarziyan, Kaushal tells Forbes India he’s glad that reputed filmmakers trust him with such roles. Click here for the full Tycoons of Tomorrow list
“I never analyse what works in my favour. I am just focussed on giving my best to whatever I am doing. I am happy that it worked,” says the actor, who featured in the 2018 Forbes India 30 Under 30 List. As someone who does not like to complicate things, he says his approach to acting continues to remain the same. “My job is between action and cut. I want to be as honest as I can be to the character I am playing. My approach doesn’t depend on whether it’s Netflix or theatre or who the director is. I try to keep it [my process] as uncontaminated as possible,” says the 30-year-old.

My job is between action and cut. My approach doesn’t depend on whether it’s Netflix or theatre or who the film director is.

The 2015 film Masaan proved to be a turning point in his career. He admits that this year has been fruitful too, but in a different way. “I got an opportunity to be a part of films which had a much wider reach,” he says.

As Kaushal’s stock continues to soar, he is excited at the prospect of working with people from whom he can learn. “I still have a lot to grow and will hopefully learn from the best in the business. I can try and do my best to whatever is coming my way,” says the actor, who will be seen in Uri (2019) and Takht (2020) next.

It’s been a short stint for Kaushal so far, but he is already regarded as one of the most promising faces on the silver screen. He likes to believe that success hasn’t changed him. And there is a lot to imbibe from his profession.Click here for the full Tycoons of Tomorrow list

“It is a process of evolution that I am a part of. And it’s been a beautiful one where you keep growing as a person and a human being. The beauty of being an actor is that you get to understand the world from a different perspective. You get to step into different shoes [as characters]. That extends your knowledge and understanding of the people around you and situations in your life,” says Kaushal.

Tweets by @forbesindia
Tycoons of Tomorrow: Torchbearers of the future
Mind games: Startups ensure mental illness is not a lonely battle