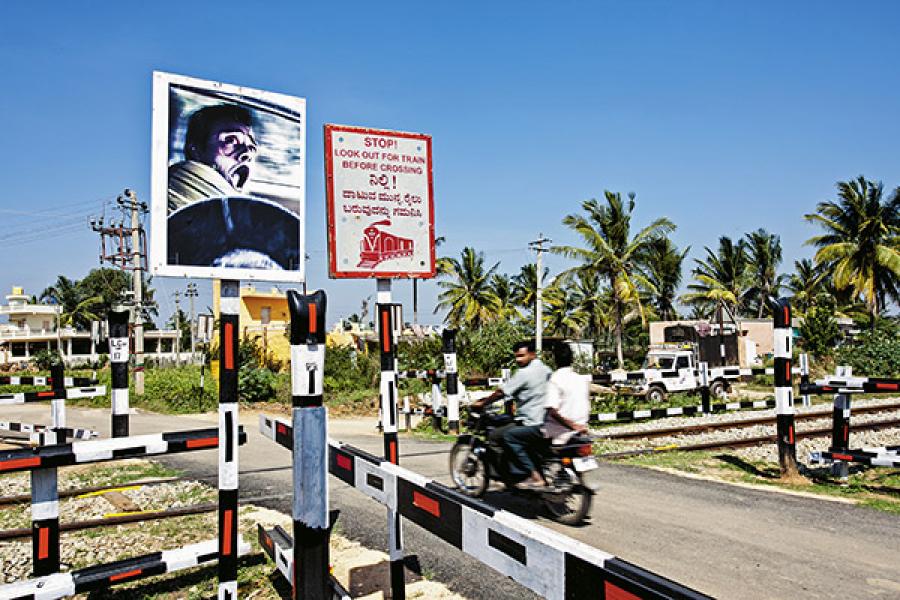 One recent evening, about 40 km from Bangalore, three men stood near an unmanned level crossing, examining the signages under the golden yellow glow of a sodium vapour lamp above and waiting for a vehicle to pass by. After about 15 minutes, a mini truck scraped through the horizon. As it neared the level crossing, it suddenly swerved from left to right, as if shaken by an invisible giant, leaving the driver, a man in his forties, startled.

That was the ‘eureka’ moment for one of the observers, who told the others: “That is the key. The way it shakes up the driver makes him alert.”

What shook the vehicle and jolted the driver out of his stupor? It was a speed-breaker, about 10 feet from the tracks, that ran diagonally, rather than perpendicular, to the road. When the front wheels of the mini van crossed the bump one after the other, rather than in unison, the van swung from side to side.

The people who designed the oddball speed-breaker belong to a company called FinalMile Consulting and the man who runs the show is Biju Dominic. They are into what they call ‘behaviour architecture’ and here’s how they helped the vehicle avert a mishap at the unmanned level crossing.

The speed of the mini truck was reduced when it hit the speed-breaker. Before it was installed, a truck or a tractor would take about 12 seconds to cross the distance of 10 metres. Now, it takes about 16 seconds. That gives the driver about 25 percent more time to observe and understand the driving condition.

What kicks does FinalMile get out of the exercise? Nothing, except that it helps save lives. If you doubt whether something as trivial as a speed-breaker does something as earth-shattering as saving lives, think about the last close shave you had while driving. What if you didn’t have to slam the brakes at the last minute because you had noticed danger signs seconds earlier? That’s exactly what the diagonal speed-breaker does. It warns you about impending danger and gives you those valuable extra seconds. 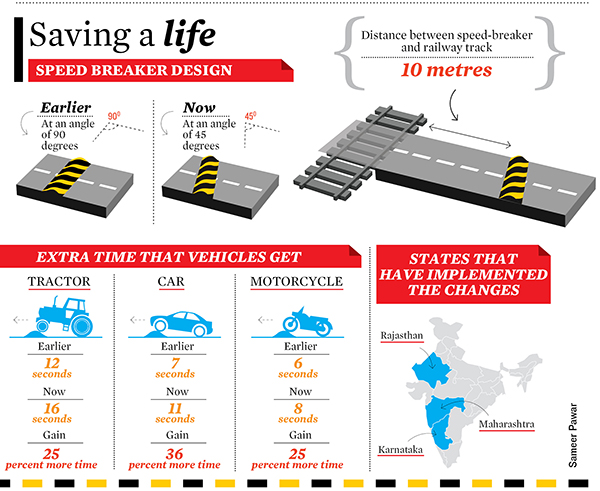 Death on the tracks
Unmanned level crossings spell danger across the world. In India, there are about 13,530 of them. Though Indian Railways does not divulge the actual number of deaths at unmanned level crossings, a back-of-the-envelope calculation can help us understand the gravity of the situation. According to a high-level safety committee set up by the government of India earlier this year, Indian Railways recorded about 15,000 deaths in 2011-12. Experts say almost 70 percent of these took place at unmanned railway crossings.

The government can eliminate the danger altogether by shutting down the unmanned crossings, making them manned or constructing roads either above or below the railway tracks. The railway ministry is considering these options. But more deaths are likely to slip past the bureaucratic red tape.

Consider this: Sixty crossings could not be closed despite commissioning of overbridges, due to technical difficulties and the costs involved. Even if the railway ministry garners the political will, the financial muscle and operational flexibility to eliminate all unmanned railway crossings, it might take years to achieve that goal. Ten thousand and five hundred lives a year—or even one for that matter—is too high a price to pay. So, what’s the way out? Enter Biju Dominic.

Behaviour is the key
Dominic did a BTech in mechanical engineering from College of Engineering, Thiruvananthapuram, but even as a student, he was more interested in “human beings than in machines”. He has a wide-ranging interest and draws insights mostly from cognitive neuroscience and behavioural economics. Both have come into prominence in recent years, the former thanks to advancement in neuroimaging, and the latter due to some very interesting research by the likes of Daniel Kahneman (who won a Nobel in economics) and Richard Thaler. While these fields of research set parameters to understand human behaviour, Dominic and his team at FinalMile have used these to explain and influence it.

They started with business—using cognitive neuroscience to study human behaviour and assist companies in devising better marketing strategies, for example. It still remains their bread and butter.

They turned their attention to public safety in 2009 with a project to minimise deaths from trespassing along Mumbai’s suburban railway network. That’s no easy task, considering that trespassing used to take at least one life every day.  This despite putting in place all traditional methods to spread awareness: Danger signages, educational programmes, awareness drives. Nothing worked. 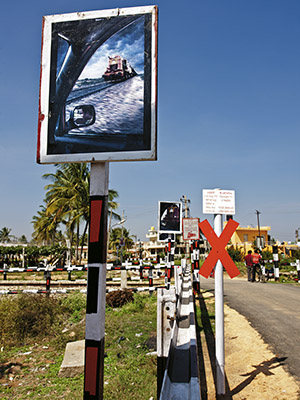 Image: Mallikarjun Katakol for Forbes India
DANGER SIGNS Pictures of impending danger counter the inherent confi dence of the driver and make him stop
Dominic and his team observed the most accident-prone areas near Mumbai’s Wadala station and made a few simple suggestions. Draw bright yellow lines on the sleepers that hold the track, which gave a reference point for the people to judge the speed of the train; blow the train horn twice instead of once for a longer duration, because the brain becomes alert in the intervening period. They were implemented—and the number of deaths dropped to nine in six months and to one in the next six. Prior to this, the number used to be 40.

Thanks to the success of the trespassing project, several divisions of Indian Railways were interested in seeing if a similar approach could work for the problem of unmanned crossings. In 2010, FinalMile was approached by the North Eastern Railway.
The company spent days and nights researching six unmanned level crossings in Rajasthan and four each in Kerala and West Bengal. They studied unauthorised trespassers; travelled in trains sitting next to the loco pilots, observing and conducting interviews with them; spoke to people who passed by the crossings; videographed the areas, studied them at leisure and pored into accident reports.

They noticed several things: Most of the people who used the unmanned level crossings lived in the nearby villages. Since crossings with high vehicular traffic were often manned, the unmanned ones, by definition, saw solitary vehicles. People’s confidence in their ability to cross the tracks ahead of the train was, to a large extent, dictated by the kind of vehicles they were in. Tractors typically stopped even when the trains were at some distance; but smaller cars and two-wheelers crossed the tracks even when the trains were just 150-200 metres away. Accident reports showed fatalities were the highest in jeeps and almost nil in two-wheelers. There were signages—starting at 200 metres—but it didn’t seem to have any impact on the drivers. And finally, they saw that the most crucial part was how attentive the drivers were in the last 10 seconds. This window could make the difference between life and death and this was what FinalMile decided to focus on.

Interventions
Their interventions—all deceptively simple—are where these observations intersect with insights from cognitive neuroscience and behavioural economics.

The first intervention is the speed-breaker we encountered at the beginning of this story. The idea of the diagonal speed-breaker is to break the familiarity of the drivers. The unfamiliar wobble would shake them into alertness. Often, known vehicles and routes lull drivers into a sense of confidence, prompting them to take wrong decisions. The most confident drivers are those in SUVs, Dominic says, as the big vehicle gives them a sense of false security. The dubious distinction of recording the highest fatality rate per kilometre goes to one of the best stretches in the country—the Mumbai-Pune Expressway. 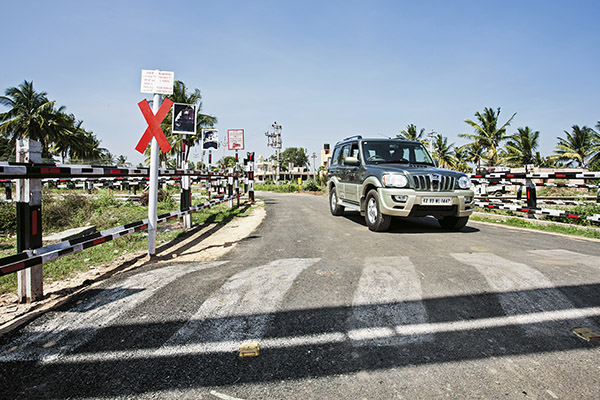 Image: Mallikarjun Katakol for Forbes India
SIZE DOES MATTER The size of an SUV lulls its driver into a false sense of security, prompting him to take wrong decisions

On the other hand, when you are riding a puny two-wheeler, you don’t feel safe. That’s why there were no fatalities in two-wheeler accidents. When you are in a tractor, you don’t believe you can race against the train, so you stop when you hear a whistle several hundred metres away. Similarly, there are hardly any accidents during the night, when drivers tend to be more alert.

Besides the diagonal speed-breakers, FinalMile also suggested that speed-breakers be painted with thicker yellow lines to make them appear taller. So, even before a vehicle approaches the speed breaker, the driver slows down.

The second intervention is a series of photographs—two of them showing an approaching train and the third an image of a frightened man about to be run over. It tackles another cognitive error using lessons drawn from neuroscience.

Human beings tend to underestimate the speed of large objects by 40 percent, according to the Leibowitz Hypothesis. The idea is to counter-balance this by what’s called nexting, playing what’s likely to happen next. Drawing on the research of Joseph LeDoux, a New York University professor of neuroscience and psychology and the theories of neuroscientist, VS Ramachandran, these pictures trigger a sense of fear. Unknown to the driver, this counters the inherent overconfidence. (It worked in Wadala too, where FinalMile displayed large pictures of a man hit by a train.)

Finally, it’s requesting the railways to move the whistle point closer to the unmanned crossing. At present, the trains whistle when they are 600 metres away. FinalMile has suggested that they move it to 300 metres, when the motorists tend to be more attentive.

Motivation
You may ask, what does the project hold for Dominic and FinalMile? Financially, nothing. FinalMile doesn’t charge a penny for this project. The cost of infrastructure is borne by the railways. Sometimes, the organisation also bears the cost of travel, but nothing more. These behavioural consultants, as they like to call themselves, just want to prove a point. “There is a certain way the world understands issues of safety. And that’s always looking at the problem from a technical and infrastructure point of view. Our idea is to prove that it will take a neuroscientific approach to solve some of these unsolved issues. That’s our thrill,” says Ram Prasad, co-founder of FinalMile.