Murugavel Janakiraman's Matrimony.com, launched with an initial focus on the Tamil community, is now a market leader in online matchmaking 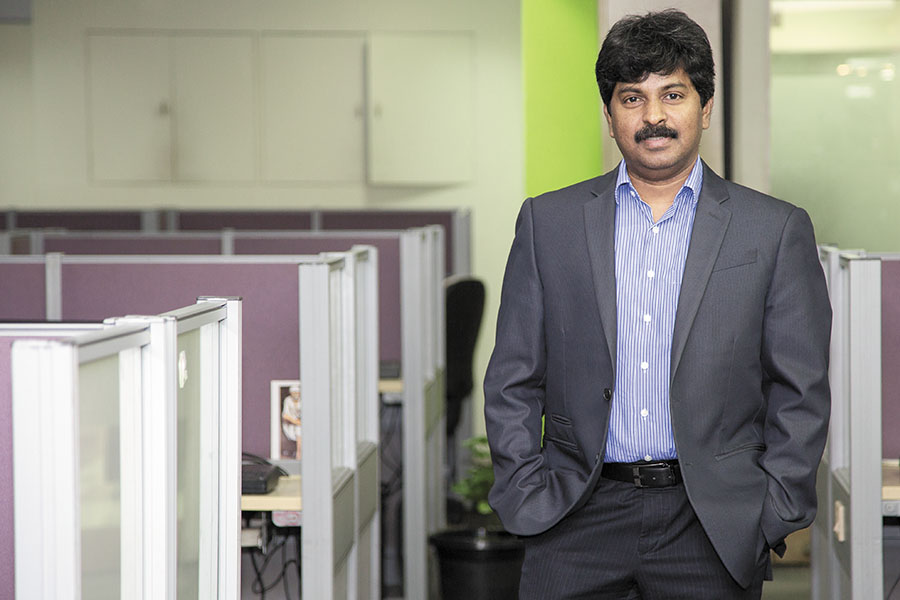 
In 1993, when Murugavel Janakiraman secured a job as a software engineer with Polaris Consulting & Services Limited in Chennai, he was able to fulfil a childhood dream: To rent a house that had electricity and a toilet. A master’s degree holder in computer applications from the University of Madras (his father was a labourer at Port Trust; his education was sponsored by his uncle), Murugavel had grown up in a one-bedroom home in a chawl in Chennai’s Royapuram neighbourhood with his parents and an elder brother, and without some of the basic amenities. “For 20 years, we lived in a 300 sq ft house,” he says.

Cut to 2017 and Murugavel is now the founder and managing director of Matrimony.com Ltd, a consumer internet company that operates from a 10th floor office at the TVH Beliciaa Towers in MRC Nagar, with a sweeping view of the Marina Beach. Two more offices of the company are spread across the city, including a call centre that houses over 800 employees. He lives in an upscale housing project in Chennai (which he bought in 2004 for ₹60 lakh) and plans to “move to a bigger house in the next few years”.

What put the 47-year-old on the highway to ascendancy is Matrimony.com, a meticulously built ₹300-crore revenue company (the bulk of which is earned from its online matchmaking business), with a market cap of ₹1,970 crore. The company’s flagship matchmaking property, through which people can look up and search for prospective partners for a fee, BharatMatrimony, has 15 language-based domains; there are other properties like EliteMatrimony, AssistedMatrimony and CommunityMatrimony, offering specialised services.

According to analytics firm comScore, matrimony.com is the leader in the online matchmaking service space in India in terms of the average number of website pages viewed by unique visitors. As per a comScore report in June 2017, Matrimony.com’s online properties clocked 991,000 unique visitors, while its competitors shaadi.com and jeevansathi.com reported 420,000 and 348,000, respectively (shaadi.com registered the highest numbers in June 2014). Overall, the website has a database of 3.03 million active users, of which about 702,000 are paid subscribers with an average transactional value of ₹4,065 each. “Matrimony.com exhibited the potential for building into a leading matrimonial platform in India,” says Alok Mittal, former managing director of venture capital fund Canaan Partners that had invested in the portal in 2006. Murugavel’s “passion” and “understanding of the business” is what made Canaan invest in the company, says Mittal, who quit in 2014 and turned entrepreneur.

Matrimony.com recently got listed on the bourses making it the fourth internet company in India to do so after Justdial, Info Edge—which owns jeevansathi.com—and Infibeam. The company’s ₹500 crore initial public offer (IPO) got oversubscribed 4.44 times (considered a conservative figure), while its share price has dipped by over 11 percent to ₹871.40 (as on November 7) since its market debut on September 21. “When you list the stock you always have to take a bet on the right IPO price. In hindsight, one can say that Matrimony.com was aggressive in its valuation,” says Harish HV, partner—India leadership team, Grant Thornton India. “[A 4.44-times oversubscription] was a clear indication that it was not an in-demand issue, because the average rate of oversubscription of other IPOs has been north of 10 times.”

Murugavel, too, admits that the IPO would have been a bigger success if the issue size was priced lower, by at least ₹100 crore. But while this may be a minor blip for the company, the continued scope for growth is clear from a KPMG report that estimates that the marriage market in India (of which online matchmaking accounts for approximately 6 percent) is expected to grow at an average rate of 0.84 percent till 2021 and about 60.5 million weddings will take place in the country between 2017 and 2021.

Given the size of the market and the scope of doing business, Harish says, “Matrimony.com is in a space where we don’t have comparable companies outside of India. You won’t expect an Amazon to come here and challenge them.”

For the first six years after its launch, Matrimony.com was a bootstrapped entity

Murugavel’s foray into the online business was somewhat fortuitous. The first in his family to finish school and the second among his relatives to attend college, he had identified chemistry as the right subject, looking at a lab technician’s job later. But the principal at Chennai’s Presidency College refused him admission as his marks in the subject were poor and advised him to take up statistics instead. But his interest and aptitude in computers led him to opt for an MCA degree which got him a job with Polaris. He left after an 18-month stint, taking up software consultancy with Hewlett-Packard in Singapore first, and then moved to the US to work as a coder.

But soon the monotony of the job caught up with him and Murugavel, who yearned to set out on his own, decided to marry his programming skills with the internet, the most popular technology of the late-’90s. He set up sysindia.com, a portal that offered Tamils a plethora of services. “I developed applications for services such as Tamil festival reminders, daily calendars, a dedicated chat forum, a travel section where one could connect with travel agents, etc,” Murugavel says. Matrimony was one such section, but he admits “it was a basic website—one page for brides and one for grooms”.

But over time, it was this page that was gaining traction, so much so that he had to expand and fine-tune it, add filters and search options to help sift through the database. “I got to know through the comments and feedback section that people were actually getting married through the portal,” he says. Perhaps the biggest confirmation of this came through his own experience of finding a partner. An article about sysindia.com had appeared in the Tamil magazine Mangayar Malar after which Janakiraman, Murugavel’s would-be father-in-law, created a profile of his daughter Deepa. Murugavel liked it enough to get in touch with the family and, when their horoscopes matched, they tied the knot in six months.

On April 14, 2000, five months after his marriage and on Tamil New Year’s Day, Murugavel, then based in New Jersey, launched tamilmatrimony.com. [The company was incorporated as MatrimonyServices.com Private Limited on July 13, 2001, and on December 2, 2014, changed its name to Matrimony.com Limited.] Back then, he had hired a small team in Chennai to operate the website from a 300 sq ft office in T Nagar. In 2003, he eventually relocated to India.

“I didn’t even see him before I joined. He had a telephone call with me and I just liked the way he spoke,” says 17-year-long company veteran Saichithra S. “He had a clear long-term vision, which made me believe that this was going to be a big organisation.” Matrimony.com’s business comprises two segments—matchmaking and marriage services. The latter vertical was added in 2015 to diversify from the core business and tap into a market that the KPMG report estimates was worth a staggering $57 billion as of 2016. While the former earns its revenue from subscription fees, the latter operates on vendor listing fees, transaction fees and commissions.

In FY17, the company showed a profit of ₹43.78 crore on a revenue of ₹292.9 crore. It also reported a ₹18.8 crore in profit for the quarter ended September 30 this year. However, it had a negative net worth of ₹26.79 crore for having restated its losses for the financial years 2014, 2015 and 2106, which cumulatively amounted to a loss of ₹87 crore. The losses are attributed to the payment of legal fees and an out-of-court settlement worth ₹53.09 crore in connection with a lawsuit in the US. Legal expenses aside, says Murugavel, the company’s operations have been profitable since the very beginning.

In fact, for the first six years since its incorporation, Matrimony.com was a bootstrapped entity that generated revenues solely from its subscription fees. Murugavel had steadily grown the business by partnering with online platforms such as Sify and Yahoo! to drive traffic on to his site. Between 2006 and 2008, he raised close to ₹99 crore in venture capital from Yahoo!, Canaan Partners and Mayfield, which still remains invested in the company. The former two exited between 2011 and 2015 through a secondary share sale to Silicon Valley investor Bessemer Venture Partners and JP Morgan Asset Management, respectively.

Interestingly, a large portion of the money that Murugavel raised then was not used in growing the matchmaking business. Instead, he ploughed the money into growing other online business verticals such as automobiles, loans, jobs and real estate, among others. But he had to either shut down or sell most of these verticals as they proved to be loss-making. Only the online property business indiaproperty.com was retained and is now a separate entity that has raised $25 million in venture funding.

From wanting to just own a functional home, Murugavel has now set his sights on building a $1 billion revenue company. “I want to build a legacy that will last beyond my lifetime and touch millions of lives,” he says.

Tweets by @forbesindia
Philanthropy: The $150 billion moment
If security is your concern, trust the cloud!