Can the Business of Food Impact Climate Change?

The food consumed annually by a family of four in the U.S. requires 970 gallons of gasoline to fertilize, produce, and transport. Helene York talks about one food service company's goal of reducing its carbon footprint while still maintaining a successful bottom line

By Yale School of Management

What is the Low Carbon Diet?
The food system is generally thought to be responsible for about a third of the world's greenhouse gases. The Low Carbon Diet is an attempt by Bon Appétit Management Company to reduce our emissions. Since livestock production is responsible for a disproportionate part of greenhouse gas emissions, the first thing we wanted to accomplish was to reduce the amount of beef and cheese we serve. We announced the project in April 2007 with a goal of reducing beef purchases by 25% in two years.

We didn't know whether we could meet the goal. We educated our chefs and our guests about how food choices affect the global environment, but we weren't forcing specific cuts on them. Unlike most food service providers, we do not issue recipes or cycle menus from the corporate office. We believe in cooking from scratch. We believe in giving well-trained, creative chefs the ability to make their own decisions. They abide by principles and standards but we give them culinary freedom. So it was a point of pride among the chefs to find ways to meet the challenge. 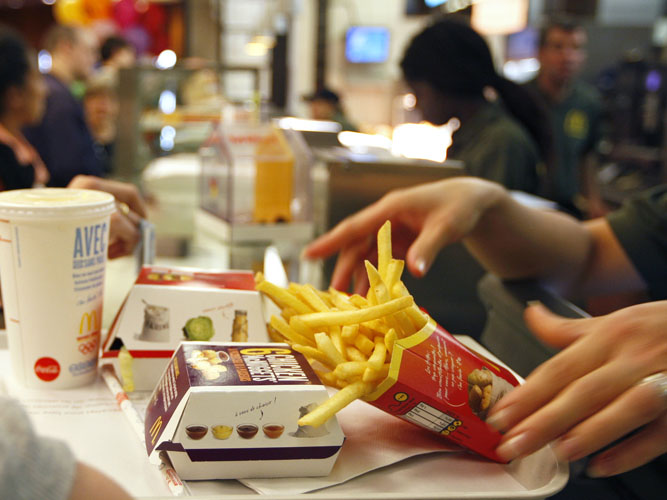 Image: Vincent Kessler / Reuters
The food consumed annually by a family of four in the U.S. requires 970 gallons of gasoline to fertilize, produce, and transport.
The chef at the café we manage at Cisco Systems in Boxboro, Massachusetts, said, "I am going to reduce beef use by making the best tasting turkey burger imaginable.” when he introduced it, he got on the grill line himself and sold it to the Cisco employees. He said "This is my turkey burger. I don't think you will find anything that tastes better." It is the best-selling item in his café. He hasn't eliminated beef burgers, but he has put beef and turkey side by side, and most people want the turkey burger. And the carbon-cost of turkey versus beef is dramatically better.
With lots of stories like that, our chefs hit a 23% reduction in the first year. In the second year, over that same baseline, they achieved a 33% reduction. They exceeded our goals and expectations by offering delicious alternatives. We're very proud of that, but sales per head have not come down, so it's the consumers who are effectively making the choices to have turkey burgers, or chili made with heirloom beans instead of beef, or mushrooms instead of meat in tacos.
The company runs 400 cafes in 29 states. We serve 80 million meals a year. The 33% reduction is equivalent to about 4 million pounds of carbon dioxide emissions every month.
This sounds like a mission-driven organization. How does that show up in the workplace?
A really important part of how the mission shapes the company is that we have a staff of 10,000 people, and only 23 of them are in the corporate office. We don't believe in directing the show from California. We believe in our people exploring food producers locally, building relationships, understanding the underlying principles that they use to produce food, and telling that story where they serve the food in their cafes.
How did you get involved?
I have always loved the world of food, but after graduating from SOM I worked for 20 years applying environmental science to business strategy at a number of organizations including bringing energy-efficiency principles to commercial real estate properties.
I was hired in 2005 to be the director of Bon Appetit Management Company's foundation, which is educational in its mission, as opposed to grant making. I was working with chefs, suppliers, and business leaders to develop a sustainable seafood procurement system. I was also asked to think about the future of the food system — the next ways of thinking about sustainable food. That led to the development of the Low Carbon Diet, with the support of a board that was well ahead of the curve on this issue.
When it came time to implement the Low Carbon Diet, I moved over to the senior management team of Bon Appetit Management Company as the Director of Strategic Initiatives.
What were some of the challenges of getting the Low Carbon Diet in place?
When we started there were so few state-of-the-art metrics available for measuring greenhouse gas impact that we had to invent tools along the way. We wanted something for our own internal accounting systems as well as a tool that consumers could use to calculate the global-warming potential of different food choices. We collaborated with a team of independent scientists to do life-cycle assessments of foods from around the world.
We also called for the total elimination of certain elements of the procurement system, such as air-freighted seafood, because sending fresh seafood from point A to point B in an airplane is 10-plus times more carbon intensive than sending the same species frozen at sea by container ship.
It's a great goal, but we're not in control of so much of the supply chain. We set purchasing preferences thereby giving a market mechanism to suppliers to provide sustainable seafood that is not air-freighted. But they are not in a position to know all the information we request. If I could go back, our goals would be stated in terms of 95% or better. We have educated our suppliers, we have educated our chefs, we have radically reduced the amount of seafood that is coming by air, but we really don't know if we've accomplished 100% elimination.
We made a country-wide commitment to locally grown food in 1999. Every single one of our chefs is required to purchase a minimum of 20% of their food from within 150 miles of the kitchen. We are now focusing on efficient regional distribution of that food.
In this country[United States] we no longer have the infrastructure that we once had for regional food systems. We don't want to return to the past where there may have been regional food systems but that meant very little variety in food. We need to forge a different kind of sustainable system, where we provide a variety of healthy food not dependent on the overuse of fossil fuels. This is a long-term project, but if we support these efforts in the United States, we also should be encouraging our counterparts in other countries to do the same there.

Tweets by @forbes_india
The Five C'S Of Going Green
How Does Business Value Human Rights?