What is the For-Profit Social Enterprise?

By Yale School of Management

Could you define social enterprise as you see it?
CARSON: I see it as a business that, beyond the profit motive, has a social mission built into their business model. Making the world a better place is a significant part of what they do.

Are either of you proposing to investors that having this social element will actually help the business in the long run?
GRIFFITH: Speaking from many years of first-hand experience, you can very quickly cross a line with the professional investor class if you speak too much to the social mission, because the professional investors want you to be very practical about the business. They like the social aspect, but you don't want them thinking, "Oh, jeez, I've got a do-gooder who's running the company and is really not going to be that interested in getting me my 10-to-1 exit."

How are the social returns measured?
CARSON: We look primarily at how much money we have raised for people. BiddingForGood does fundraising auctions which make up a $16 billion corner of the nonprofit fundraising market. We work in three ways: one is making these auctions work for the commercial item donors; two is making it work for the consumers, so they can find and access auctions 24/7 as opposed to having to be at the Weston Hotel on Friday night; and ultimately we make it work for the nonprofits who raise more money because they have more demand and more supply. We have a performance-based pricing structure, so the incentives are aligned. The more they make, the better we do. To date we've raised more than $70 million. There is a “goodometer” on the homepage of BiddingForGood that ticks up with each dollar raised.

Being a part of a business with a social mission matters to employees too. In the late 1990s, I ran a social enterprise called Family Education Network, which was a pretty visible dot-com in the Boston marketplace and was a target for search firms, since people were starving to get HTML editors and Java coders and so on. We did not lose a single engineer during the dot-com boom because they got stolen away by a third party. And I think a lot of that had to do with the mission, in addition to making a good wage and getting stock options. Because of the mission, all other things being equal, it was better to stay at Family Education Network than to go off to, you know, Router.com. 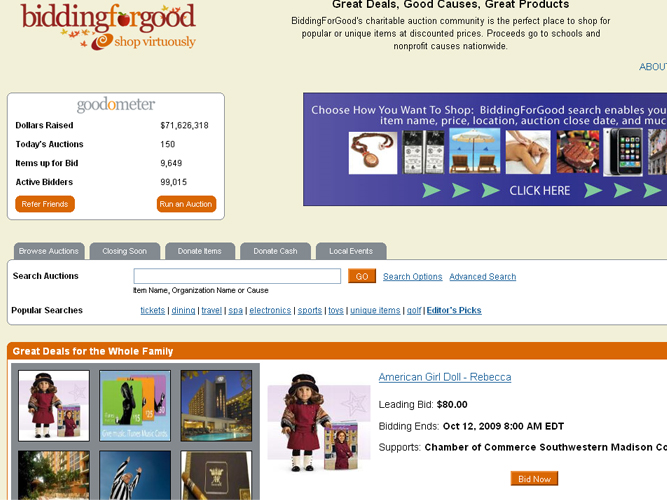 "One might argue that the biggest difference is that the for-profit model has a much easier time attracting capital, whereas the nonprofit model usually requires ongoing fundraising efforts," says Carson
GRIFFITH: I've actually had recruiters make similar comments to me. They find it very difficult to make calls into Zipcar. They can't get calls back.
As CEOs of social enterprises, how do you make the call when your social goals and profit motive conflict?
CARSON: I think that, in the case of both Scott and myself, the very nature of what the business does, day in and day out, takes away a lot of those conflicts. If we were oil drillers, there might be big problems. But there are very positive social benefits inherent in what we do.

GRIFFITH: Just by the nature of our business model, the social benefits are accruing as we grow. Most of our members don't own cars. As a result of that, every car we put on, we know through surveys, takes about 20 personal cars away, because people choose not to buy a car or they sell a car.

That 20-for-1 ratio also benefits household discretionary income. Through surveys we know that between $6,000 and $7,000 a year of transportation spending comes back into the household after they've spent on Zipcar. A clear social and economic benefit to the community that accrues as that happens.

As a lot of the economists will tell you, any time you start to pay for something per unit as opposed to a fixed cost, you get much smarter about how you spend your money. So as you transition car transportation from a fixed cost, being car ownership, to a variable or a unit cost, like Zipcar, people get a lot smarter about grouping their trips. And they just make the trade-off: Should I walk? Should I take public transit? Should I use the Zipcar? Their vehicle miles traveled get cut in half. The big purchasing driver, in our case, is economics. That's the steak, and the sizzle is the social good that comes with it, and the sense that they're doing something good for the environment and for the community as a result of their behavior shift toward Zipcar.
Are there regulatory or policy issues that could be realigned to support social enterprise as a bigger part of the economy?
GRIFFITH: The first thing, I think, governments and policymakers should look at is current policy that actually acts as a disincentive to sustainability and socially-positive activity by businesses. We've seen specific examples of that at Zipcar, where we can get caught up in the rental car tax codes, so people that use our cars can end up having to pay a lot of taxes that were really intended for business travelers picking up cars at airports. And so you have people behaving exactly as you would want them to — they're dumping their personal cars, driving less, using transit more — and you're taxing them to do that?

Fixing unintended consequences of legacy policies can be as beneficial as thinking proactively about new policies that would benefit and accrue to social good.

Should nonprofits be concerned that for-profit social enterprises will compete with them?
CARSON: I'll state it a little differently: I think that an awful lot of nonprofits are fragile and at risk, whereas for-profit social enterprises, to the degree that their business models are functioning properly have a workable business model, so they are not coping with this problem of whether donors are going to show up for the big annual campaign.

For-profit social enterprises are also required to deliver a superior product or service, because if you don't, you have no revenue. So there is a very nice enforcement mechanism that suggests for-profits are going to be more resilient because they've had to compete for customers every day.

Tweets by @forbes_india
How Important is the Illicit Economy?
What's Next for Globalization?