The Fats of Life: What Weight Should You Lose?

The skinny on subcutaneous and visceral fats

Chances are that you, your friends and neighbours are fighting an enemy you know little about. Answer the following, and please prove me wrong.

Fat:
A. Stores energy
B. Influences your ability to fight infections
C. Regulates your blood pressure
D. Affects the way blood forms clots
E. All of the above 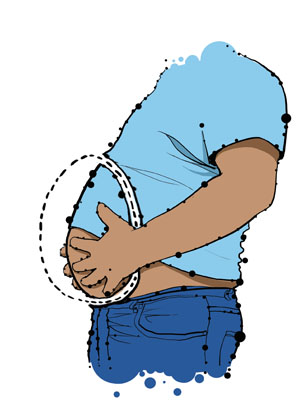 Fat is not just a bland storage depot.  It is an active source of signaling proteins that regulate all of the above and more. Answer: E.

Before you spread a little butter to celebrate the multi talents of fat, the sad truth is that too much of fat is still a bad thing. The chocolate lining here is that if you lose fat, you may see a lot more improve than just your waistline.  You can fundamentally alter your metabolism. The trick is to know what fat to lose, and how to lose it.

The body basically stores fat as two types — subcutaneous and visceral or abdominal fat. Think of them as the useless and evil fats respectively. Beneath the skin goes your useless or subcutaneous fat. The flab around your waist and fat in your thighs and buttocks is this kind. It is the fat you can treat by liposuction. The popularity of liposuction stems from its intuitive principle: Make an incision and suck out some fat. “It is very safe and performed over 200,000 times a year in the US alone,” says plastic surgeon Dr. Raman Sethi. He acknowledges, however, that its results are purely cosmetic. “Liposuction does not have an impact on the metabolic pathways.”

Visceral fat is what goes deeper and is metabolically evil. It is associated with diabetes, cardiac disease, high cholesterol, hypertension and other causes for concern. It lives in your abdominal cavity and around important organs, such as your liver. Your genes play a role in directing your surplus energy viscerally instead of subcutaneously. So do some bad habits. A beer belly is visceral fat gone wild. As liposuction accesses only the fat beneath skin, it cannot deflate a beer belly.

Visceral fat is also deceiving because it may be high in even those without central protuberances. “We have done extensive research using MRI to quantify abdominal fat in humans,” says radiologist Dr. Harsh Mahajan. “Often, those who do not appear obese have high amounts of abdominal fat inside.”  He thinks that imaging will be the way doctors will start assessing levels of visceral fat in the future.

The reason there are no common tests to assess visceral fat levels today is because we don’t have much by way of targeted treatment. Animal studies have shown that when visceral fat is surgically removed, animals become healthier. For humans, the best recommendation is rigorous exercise. Though exercise is the ideal way to shed weight, it is also the least likely to be adopted by those who need it the most.

There are many medications in the pipeline to treat obesity in general.  Some suppress the appetite, others decrease fat absorption. Leptin is an obesity hormone that has long eluded drug developers, but may still play out.  Bariatric surgery works, but is only indicated for the morbidly obese. Those seeking a quick fix for their abdominal fat should hold off the next round of their beers; it may take some time for effective treatments to emerge.

I predict we will have minimally invasive surgeries that do for visceral fat what liposuction has done for subcutaneous fat.  We will be able to selectively and delicately remove the bad fats from the abdominal cavity using advanced robotic technology. Until then, while you diet and exercise, take inspiration in knowing that even if your weighing scale denies you exciting results, you may be dissolving some evil visceral fats within.

Tweets by @forbesindia
Ashok Soota: "MindTree Has a Great Leadership Team at Its Helm"
Khurshid M. Kasuri: We Were This Close To A Peace Accord