2015 Forbes India Celebrity 100: The wheel of fame and fortune

The Baadshah is back. At 50, Shah Rukh Khan continues to rule India’s celebrity index. After slipping to No 3 last year, he has wrested back the No 1 position on the 2015 Forbes India Celebrity 100 list from Salman Khan. Shah Rukh made the most amount of money this year—a whopping Rs 257.5 crore. This is the highest any celebrity has ever made in the four years since the Forbes India Celebrity 100 list was instituted; in fact, his earnings are 9 percent of the total wealth of the top 100 celebrities this year—Rs 2,819 crore.

The other aspect of celebrity—fame—is where Shah Rukh still lags behind at No 4. Here, the big man of Bollywood, Amitabh Bachchan, still reigns at No 1. With about 17.5 million followers on Twitter, the highest-ever for any celebrity on our list, the 73-year-old icon can teach a thing or two about social media to the digital generation. (Interestingly, on Facebook, singer Yo Yo Honey Singh is on top with over 28 million followers waiting eagerly to ‘like’ his every post.)

Aamir Khan has made it to the top five on the list this year for the first time. His runaway hit PK (December 2014) and revenues from endorsements have brought him Rs 104.25 crore, his highest in the last four years. That’s 145 percent more than what he earned in 2012.

On the other hand, Alia Bhatt and Madhuri Dixit have moved up the list despite the lack of any movie revenue this year. Their rise is entirely due to brand endorsement revenue and their fame quotient.

Mahendra Singh Dhoni maintains his rank at No 4 this year.

Among the top 3 rank gainers this year are Dhanush (who moved up 41 ranks), Rohit Sharma and Allu Arjun (both up 38 ranks).

While most celebrities have gained higher ranks due to an increase in their revenue, others, like Rohit Sharma, have moved up the list largely due to a spurt in their fame quotient. Sharma’s fame rank went up to 8 from 32, ensuring him a slot in the top 20. His 264, the highest score in one-day international history (against Sri Lanka in November 2014), and news about his engagement helped bump up his popularity.

Seven celebrities (Yo Yo Honey Singh, Sunny Leone, Virender Sehwag, Jacqueline Fernandez, Ishant Sharma, Harbhajan Singh and Gautam Gambhir) are in the top 50 largely due to their fame quotient. Their revenues are in the range of Rs 1.5-7 crore but their popularity has ensured a higher ranking on the 2015 Forbes India Celebrity 100 list.

This year, the list witnessed 14 debutants; among them, cricketer Ravichandran Aswhin comes in straight at No 31. Meanwhile, filmmaker SS Rajamouli and actor Prabhas make it to the list this year primarily because of the superhit Baahubali.

There were casualties too, with 19 people, including notable names like Sanjay Leela Bhansali, AR Murugadoss and Shankar-Ehsaan-Loy, not making the cut this year.

But that is the nature of celebritydom: Sometimes fickle, sometimes fair, often bewildering; however, never dull. 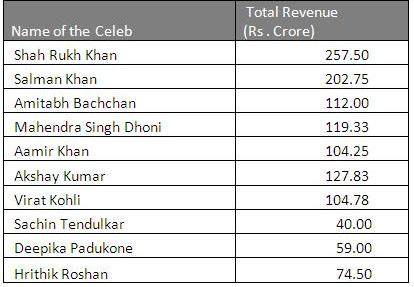